For millions of people, particularly in the United States of America, boarding a jet plane for a quick journey to a city many hundreds or even thousands of miles away, is very much a routine act... or at least it was until Covid-19 struck. More than any other object, the jet airliner is the machine that served to “shrink the globe”, bringing in the modern age of international travel and international economies; yet it was only in the 1950s that the first commercial jet passenger plane took to the skies. 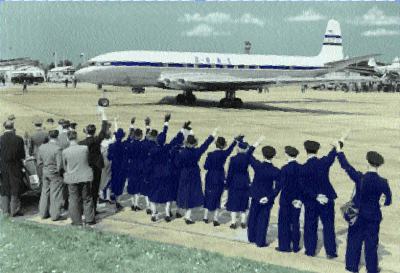 1952 - The world's first commercial jet service prepares to take off.

Radlett, near London; April 1951; with a deafening roar, a great shining silver aeroplane hurtles down the runway outside the De Havilland Company's huge hangers on this airfield just north of London; a minute later, the world's first jetliner, the Comet, is airborne for the first time as the property of a commercial airline, B.O.A.C, the precursor of today's British Airways.

At that moment, few of those on the ground watching the historic take-off could have had any idea of the impact that this new invention was going to have on civilisation in the second half of the twentieth century.

Yet without the jet plane to carry passengers, be they businessmen, holidaymakers, politicians or even whole armies, over vast distances at high speed, the world in which we now live would be a very different place.

The Comet that took to the skies that day, after a year of test flights, was of course not the first jet plane.

It was in the year 1930 that an English engineer called Frank Whittle had patented the first jet engine; but in an all-too common British twentieth-century manner, Whittle and others failed to grasp the commercial and military potential of his invention, and it was a German company, Heinkel, who actually produced the first jet aircraft, in 1937.

The first British jet aircraft to fly was an adapted version of the Gloster E-28 in 1941; but in the fever of the war years, priority was given not to developing experimental aircraft, but to mass producing those propellor planes, such as the famous Spitfire, whose performance was guaranteed. Thus it was not until 1944 that the world's first two real jet aircraft appeared, the Messerschmitt Me 262 in Germany, and the Gloster Meteor in England.

In the immediate post-war years, with the German aircraft industry out of action, development of jet aircraft technology progressed rapidly in Britain, as did aircraft design in general; and within three years of the ending of the war, the De Havilland company was working on its great project, the first passenger jetliner.

A year after being handed over to BOAC, the Comet entered commercial service, with a flight from London to Johannesburg; but it was a premature beginning. Within two years, two Comets crashed in mysterious circumstances, and all existing planes were grounded. The cause of the problem was soon identified: it was metal fatigue, a problem that had not existed with the smaller lighter aircraft of earlier times.

By 1955, a solution had been found, Comets were able to take to the skies again, and international jet services were reintroduced between London and major destinations; this time, the age of jet air travel had really begun.  (End of audio) 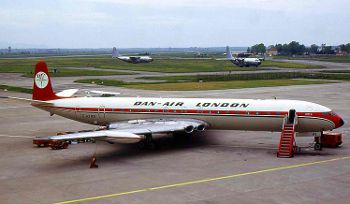 1974 - One of the last Comets still in service, with historic "low-cost" airline Dan-Air.

A pioneering aircraft, the Comet however was not a big commercial success. Over in the USA, Boeing had been working on an American jetliner, and within weeks of the reintroduction of Comet services by BOAC, the first Boeing 707’s came into service. Stimulated by sales on the vast North American market, the 707 was soon established as the world’s leading jetliner, pushing Boeing to the top as undisputed world leader in its field.
The Comet, France’s Caravelle, and later Britain’s Vickers VC 10, products of sophisticated but small national aerospace industries, could not hope to compete in the world markets against the domination of Boeing; and it was their relative failure that eventually forced national governments to support the creation of Europe’s first really successful manufacturer of jetliners, the Airbus Consortium.
Today, thanks to a steady increase in the size of aircraft and an improvement in their efficiency, the cost of air travel has fallen by over 80% since the first Comet flights over half a century ago. Once the exclusive reserve of a privileged few, air travel has become a very ordinary event, and in North America at least, something that is considerably more of a part of everyday life than taking the train.
Thanks to cheap and rapid air travel, allowing businessmen and politicians to travel vast distances at relative ease, the nature of trade and international relations has changed profoundly. Sixty years ago, international meetings of heads of state were rare events; today they are daily occurrences; sixty years ago, few people from Northern Europe had ever seen the Mediterranean, and today’s holiday resorts like Torremolinos or Cap d'Agde were just sleepy fishing ports; in military terms, the idea of a “rapid reaction force” was unheard of. But maybe the Golden Age of the jet plane is already behind us. Concorde, the fabulous supersonic "white bird" has come and gone; and since Covid appeared, most, if not all, of the world's Airbus A380 "super-jumbos" have remained on the ground, too big for the needs of a declining air travel market.
So much has changed since 1950, that it leaves one wondering what people will be doing in 2050....

English grammar has at last got clearer and more understandable

Printing: Optimized for printing.
Copyright © Linguapress.  Do not copy this document to any other website
Copying permitted for personal study, or by teachers for use with their students

Flying times - the story of the jet airliner

Syntax: There are two points to note with this article; a) participles, and b) demonstratives.

Replace all the missing -ing and -ed endings (or other past participal forms), after first studying the text carefully.
Complete this exercise on your computer.
To save your answer, either take a screenshot, or else select the text below, copy it and paste into a file that you can print before filling in.


The first British jet aircraft to fly was an adapt version of the Gloster E-28 in 1941; but in the fever of the war years, priority was giv not to develop experimental aircraft, but to mass produc those propellor planes, such as the famous Spitfire, whose performance was guarante .  So it was not until 1944 that the world's first two real jet aircraft appear , the Messerschmitt Me 262 in Germany, and the Gloster Meteor in England.
In the immediate post-war years, with the German aircraft industry out of action, development of jet aircraft technology progress rapidly in Britain, as did aircraft design in general; and within three years of the end of the war, the De Havilland company was work on its great project, the first passenger jetliner.
A year after be hand over to BOAC, the Comet enter commercial service, with a flight from London to Johannesburg; but it was a premature beginn Within two years, two Comets crash in mysterious circumstances, and all exist planes were ground .
The cause of the problem was soon identifi : it was metal fatigue, a problem that had not exist with the smaller lighter aircraft of earlier times. By 1955, a solution had been found, Comets were able to take to the skies again, and transatlantic jet services were reintroduc between London and major destinations; this time, the age of jet air travel had really begun.

Can you explain and justify each correct answer ?

Try to produce a simple technical text, describing what travel may be like in the year 2051. Use at least five of the following words and phrases in your  150-200 word document:


Copyright notice.
This resource is © copyright Linguapress - Updated 2022.   Originally published in Spectrum magazine.
This text may not be reproduced on other websites nor in printed form without written permission from the publishers. Reproduction is authorised exclusively for personal use by students, or for use by teachers with their classes.


All articles published on this website remain the copyright © of Linguapress.com and/or their individual authors.