► You are here:   Linguapress  ›
Online English grammar  ›
Problem words - So

Explaining some of the everyday words in English, that are easy to confuse

The word so in English 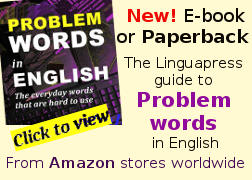 The familiar everyday words that cause so many problems
It's a fact of language that so metimes it is the shortest smallest words that cause the greatest problems for learners. Perhaps that's not surprising. Many words are short, because they are common; like is, or be or to or so. As essential common words, they've evolved for centuries, and their shortness has helped them to survive. They may not always be easy to use, but they are easy to remember. Many short words have several different meanings, sometimes very different meanings. "So" is a very good example of this.

The different meanings of so

The word So has five common uses in English.  Very simply, we could express these by describing the five different functions in a few words
Now, let's look more closely at each of these,.

In this case so is a conjunctive adverb expressing a consequence.
(Some grammar books consider it to be a coordinating conjunction)
.
This is the fundamental meaning of so as a connector.
The coordinated clause of consequence must follow the main clause.

In example A1 above, you might imagine that there could be an ambiguity between consequence and purpose; but this is not ambiguous for English-speakers. A so clause following a main always expresses consequence unless it refers to future time. (Compare with example B1 below).

In this case, so is a subordinating conjunction, expressing a purpose. It can either be used alone, or else in the expression so that.
The subordinate clause of purpose can either precede or follow the main clause.

So that is usually preferred if the subordinate clause of purpose comes before the main clause.
So as is used to express purpose, particularly in spoken English. In this case the verb in the secondary clause is in the infinitive with to (example B6).


Note: so or in order for expressing purpose?

As a general rule, so that is much more common than in order that (except in formal written language), and to or in order to are generally preferable to so as to (except in informal spoken language). See Styles of English.

So expressing a degree

So does not quite mean the same as very; it is an intensifier, an adverb of degree qualifying an adjective, and  expressing relative high degree, or a perception of high degree.
It is often used to qualify an adjective in a statement of consequence.

Unlike other intensifiers (very, quite, etc) so it not usually used with attributive adjectives (adjectives that precede the noun), but only with predicative adjectives. These children are so good is acceptable; these so good children would not normally be considered as acceptable. Even if so is occasionally used in this way, it is more normal to say These are such good children. See ► Uses of such.

So expressing agreement or confirmation

So can have the meaning of "that" or "it is true" or "that that is true".
In this sense it a substitute word, a pro-form but not really a pronoun, as it refers back to a whole statement, not to a noun. (To refer back to a noun, we would use the pronoun it or they).  It confirms - often strongly - a statement that has already been made, or in some cases implied. It can be used in dialogue to confirm the answer to a question.

Some other functions of so

So is used in a number of idiomatic phrases, such as "so and so ", "and so on" or "so-so" . Here are some examples with explanations.