Reported or indirect questions in English


While expressing reported statements in English is relatively easy to master, putting direct questions into reported speech can often cause problems for the learner.

This is not complicated. The verb tense in the reported question is the same as in the original question.

2. Reporting the past: deferred reporting.

This is a little more complicated, but not impossible to master. It is the more common form of reporting.  The verb in the reported question usually changes.

2.1. Reporting the past from the present. 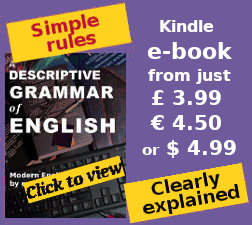 Print editions from Amazon,
Barnes & Noble, Waterstones
and other  good bookshops
In the examples above, the jacket (M1) has moved since the question was asked, but London  (M11) has not moved !  We can suppose that the noise (M2) has stopped, but that the person still lives (M21)  in the house,  and so on.
As for example M31, people often put the verb into the past tense in this type of reported question, though strictly this is not necessary, nor really really correct.  "He asked me if I spoke English" suggests that speaking English is something you can do one day, but not the next..

2.2. Reporting what was the future in the original question.

When a direct question using a future verb form is reported, the future form of the question clause becomes a conditional, or a future-in-the-past if what was the future is now the past.

If the original future is still in the future (M11, M31, etc), then the reported question remains in the future.

Footnote:
Absolute and relative adverbs of time or place.
English (like many other languages) has a series of adverbs of time and place which are absolute concepts, and strictly related to present time (the moment) or place.  Now,  today,  yesterday,  tomorrow,  in five minutes' time (etc), here.

In indirect questions or statements, the moment is not normally the same as it was when the question or statement was originally made. Therefore it is often necessary to change the adverb of time and use one that  expresses a relative concept of time.  Here are the most common pairs:

Example:
"Can you be here tomorrow?"  would be reported as:
He asked if I could be there the following day.

Copyright   : Website and texts © Linguapress.com  except where otherwise indicated

Copyright information.
© Linguapress. Free to view, free to share,  free to use in class, free to print, but not free to copy..
If you like this page and want to share it with others,  just share a link, don't copy.