TEA and the British

The father of modern economics, Adam Smith, once described the British as a "nation of shopkeepers". He might just as easily have described them as a nation of tea-drinkers, since tea has long been a national favourite. The image of the tea-drinking British is not just a myth; it is a reflection of reality. Today, tea accounts for about 43% of all the drink consumed in Britain, excluding plain water 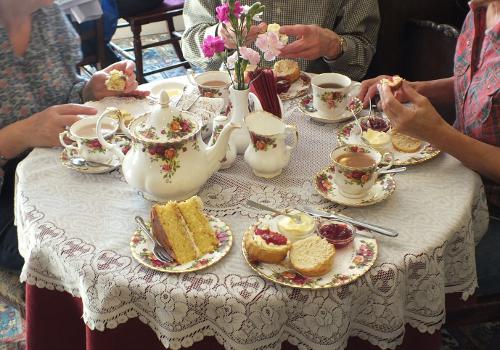 Tea-time in a traditional English tea-room : tea, scones and cream, and cake.
There was a time in the late 20th century when some people believed that coffee would replace tea as Britain's favourite beverage.     In the event, that has not happened, and today, tea remains firmly anchored as Britain's favourite drink, accounting for over two fifths of all the drink consumed in Britain with the exception of water.
To say that the British are fond of tea is something of an understatement. From the Royal Family down to the humblest of the homeless and the out-of-work, tea is more than just a pleasure; it is an essential part of life! It is one of those things that distinguishes life in Britain from life anywhere else. The average Briton over the age of 10 drinks two and a half cups of tea per day, over 900 cups per year – mostly tea with milk in it — which makes Britain one of the leaders in the international league of tea-drinking nations! Only the Irish and the Turks drink more tea than the British; in Europe, the nearest rival to Britain is Russia, where people only consume about 700 cups of tea per year.
In 2020, during the Covid lockdowns, tea consumption in Britain went up by 50%, as more people stayed at home all day.
The popularity of tea in the United Kingdom has a long history, reflecting the nation's development since the seventeenth century. It was in 1657 that Thomas Garway, the owner of a coffee house, sold the first tea in London. The drink soon became popular as an alternative to coffee, and by the year 1700, there were over 500 coffee houses in the British capital selling the new drink.
In those days however, it was not something for anyone; the cost of a pound of tea in the year 1700 (up to 36 shillings a pound... ) was almost the same as it was in 1985 (average: £1.80 a pound).... but in 1700, a working man earned one shilling a week, compared to £140 in 1985!
For a century and a half, tea remained an expensive drink; many employers served a cup of it to their workers in the middle of the morning, thus inventing a lasting British institution, the "tea break"; but as a social drink outside the workplace, tea was reserved for the nobility and for the growing middle classes. Among those who had the means, it became very popular as a drink to be enjoyed in cafés and "tea gardens".
It was the 7th Duchess of Bedford who, in around 1800, started the popular fashion of "afternoon tea", a ceremony taking place at about four o'clock. Until then, people did not usually eat or drink anything between lunch and dinner. At approximately the same time, the Earl of Sandwich popularised a new way of eating bread — in thin slices, with something (e.g. jam or cucumbers) between them, and before long, a small meal at the end of the afternoon, involving tea and sandwiches had become part of a way of life.
As tea became much cheaper during the nineteenth century, its popularity spread right through British society, and before long, it had become Britain's favourite drink — promoted by the Victorians as an economical, warming, stimulating non-alcoholic drink. In working-class households, it was served with the main meal of the day, eaten when workers returned home after a day's labour. This meal has become known as "high tea".
Today, tea can be drunk at any time of day.  The large majority of people in Britain drink tea for breakfast: the mid-morning "tea break" is an institution in British offices and factories (though some people prefer coffee at this time of day); and for anyone working outdoors, a thermos of tea is almost an essential part of the day's equipment. Later in the day, "afternoon tea" is still a way of life in the south of England and among the middle classes, whereas "high tea" has remained a tradition in the north of Britain. 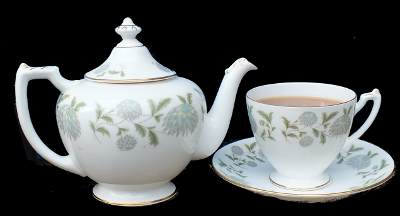 To make tea. Put two teabags or teaspoonfuls of tea into a warmed pot. Add boiling water, and leave to brew for three or four minutes. Serve with a dash of milk and/or sugar. Tea without sugar is the best accompaniment with sweet snacks (biscuits, jam sandwiches, cakes).
Some brands of tea:
Ty-Phoo, Brooke Bond etc. "Standard" British teas are Indian varieties, which can be drunk quite strong.

The   best Indian tea is reputed to be Darjeeling tea. Assam tea is a much darker stronger tea. China teas are more delicate: the most popular are Keemum and Lapsang Souchong.
"Earl Grey" tea is a blend of China and Darjeeling, flavoured with oil of bergamot.

WORDS
beverage: drink - in the event: in reality - an understatement: the opposite of an exaggeration - owner: proprietor - shilling: 0.05 pounds (5 modern pence) - to last: to continue - a break: a pause - had the means: had enough money - labour: work - factory: industrial building - cuppa: cup of tea - brew: infuse - a dash: small amount - a brand: a trade name - a blend: mixture - flavour:  taste -

Printing: Ready to print
Copyright © Linguapress.  Do not copy this document to any other website
Copying permitted for personal study, or by teachers for use with their students.

Useful. Fora choice of English teas for yourself or as a gift, check out  Fortnum and Mason of London - Delivery worldwide.

Tea and the British

Here is a summary of the article on tea. However, it contains 10 errors of fact. Can you find them, and correct them.  After doing this, try to rewrite this résumé, changing as much of the expression as you can, without changing the meaning.
Interactive exercise: the text in the box below can be changed or edited on screen

Tea is the most popular drink in Britain, accounting for almost half the liquid consumed by people in Britain; furthermore, the British are the world's biggest tea drinkers — having  been so ever since Thomas Garway became the first person to sell tea in London, in the year  1567.
Three hundred years ago, however, tea was a very expensive drink. Nevertheless, the great British tradition of the "tea break" began very early on, as employees got into the habit of serving tea to their workers in the middle of the  day. As a social drink, tea was initially reserved for the middle classes and the nobility, who could not afford it.
The ceremony of "afternoon tea", a snack of tea and sandwiches between lunch and dinner, was invented by the Earl of Sandwich in the early eighteenth century; then the drink became very popular with the Victorians, who preferred it to alcoholic beverages.
Today, tea is still extremely popular, since it can be drunk at mealtimes at any time of the day.

Using the errors exercise in class.  If your classroom has a smartboard, a connected whiteboard or a wall projector, project the errors exercise box onto the screen or wall, and take this error correcting exercise as a class activity. Give students a few minutes to look for the mistakes individually, then ask them to point them out to the class. To increase student participation, have students search for the mistake in pairs or groups of three, depending on the size of your class. Some of the errors should be easy to spot, others are harder.