America's Amish communities live a lifestyle that has changed little since the 18th century; but in other respects, they are showing other Americans the way forward in the twenty-first.... 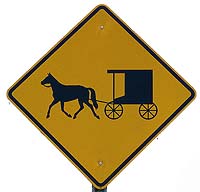 ► See below for vocabulary explanations

The roadsign is, to say the least, unexpected ; driving through a prosperous rural part of North America, the last thing you expect to see beside the highway is a yellow diamond roadsign with a horse and buggy in the middle! Watch out for horses and buggies on the road? What is this? Do they exercise racehorses here, or what?
You keep an eye open for horses; for two miles you see nothing, then all of a sudden, look! Coming towards you on the other side of the road, two black horse-drawn buggies! As they go by, your surprise turns to disbelief; what's going on? Are they making a movie about eighteenth century America? The men and the women in the buggy look like they jumped out of a novel by Fennimore Cooper. 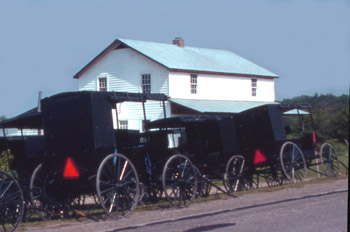 Then, another mile and things get even stranger; beside a neat-looking farm-house, there is a whole line of buggies. In the door of the house, half a dozen men in black coats, and with long beards, are talking while some women dressed in a curiously ancient fashion are sitting on a bench. Is this 2020 or 1720 ?

You drive on, wondering what has happened to this part of the United States of America? Have you driven into a time-warp, and without realizing it, gone back 300 years, or is it the people you've just seen who're stuck in a time-warp?
A quick inquiry at the nearest gas station gives you the answer; you are in Amish country, and the men and women you have just seen are Amish, part of a strange religious group that settled in America in the 18th century, and much of whose lifestyle has changed little since then.
If you had seen the movie "Witness", you would have already known something about the Amish, how their community is strictly religious and self-contained, how Amish people do without the essentials of modern-day life such as electricity and cars, and how they do not mix with people outside of their own community. It is virtually unheard of for anyone to become an Amish, who was not born an Amish. This is about all that most Americans know about Amish people, unless, that is, they actually live near them and come across them in daily life. So who are they? 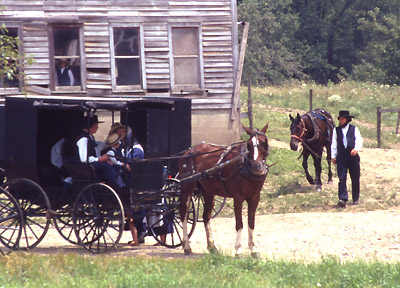 In brief, the Amish are members of an ultra-protestant religious movement that first came to America from the upper Rhine valley over three hundred years ago, and have kept their traditions and lifestyles. They are very law-abiding citizens, and their community is one in which there is little crime, or at least little reported crime. Amish families are patriarchal and live strict lives, following the same code of morals as their ancestors. In a sense, they are indeed stuck in a time-warp.
Yet the most remarkable things to note about the Amish are not their quaint lifestyles and their home-made clothes,  but the expansion of their community,  its efficiency, its social cohesion, and their recent adoption of "green" technology, including wind-power and solar energy. Although they work the land using traditional horse-drawn machines, and use no chemical fertilizers, their agriculture is - interestingly - among the most productive in North America !

While white America is, on the whole, a population that is stable in numbers, the Amish community is growing faster than virtually any other community in the USA. In the 40 years from 1950 to 1990, the number of Amish in Lancaster County, Pennsylvania, the original and still the largest Amish community in the USA, grew by exactly 400%, all by natural growth, not through the influx of immigrants. The Amish do not keep statistics, but it is fairly safe to assume that the total Amish population of the United States in the year 1900 was no more than a couple of thousand; today the Old Order Amish, those who have kept up the strictest traditions of their religion and society, number over 100,000, spread in communities across the eastern US and Ontario. The total number of Amish living in the United States in June 2020 was estimated at over 344,000... an increase of almost 90% since the start of the twenty-first century.

Amish, who reject modern medicine and all forms of birth control, have some of the biggest families in America, with an average of over six children per family. Few abandon their community.

Amish teenagers tend to be as normally rebellious as any other American teens, until they are baptized. Until this happens, they are not obliged to conform to the strict Amish codes of dress, hairstyle and behavior, and many make the most of this liberty; before baptism, Amish teenagers behave much like other American teens;  up to 30% of older unbaptized Amish teens own cars, and 40% have drivers licences! Amish teens also enjoy baseball, dancing and even alcohol!  Amish baptism takes place between the ages of 16 and 21, sometimes even later. 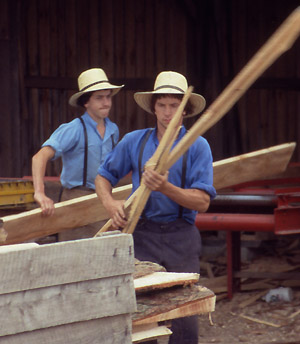 
The fact that only about 18% of young Amish abandon the austere way of life of their ancestors is not the only reason why the community is growing so fast. Other factors include increasing life-expectancy, and higher standards of living.
As for machines and modernity, Amish families do not live a primitive life; while they reject the use of mains electricity in the home, they accept the use of kerosene and efficient wood-burning stoves that provide plenty of light and heat and comfort in their homes; and they are certainly not out of touch with technology.  It was estimated that in 2007, 80% of homes in some Amish communities were using wind or solar power ! In this respect, far from being stuck in the past, they can be considered as one of the most advanced communities in the world !
As for leisure, it is not one of their major preoccupations! While they do not have televisions or radios, they have other social activities; yet Amish leaders actually fear  that the development of a cult of leisure could rapidly destroy their society.
Contrary to popular belief, the Amish are not cut off from the rest of America; like any farmers, they need markets for their products and suppliers for their goods; some work for non-Amish employers. Many have non-Amish neighbors. They know what is going on in the rest of the United States, and like many other Americans, they are alarmed by many modern developments.
This too explains why most young Amish opt to carry on with the hard-working and strict way of life of their community. Though Amish life is hard in many ways, it is free of most of the pressures and problems of the rest of American society. As long as this lifestyle is not forced into radical change, many of those who have been brought up in it will continue to see it as an  attractive option.

WORDS
Amish is pronounced "ar-mish" - buggy: small carriage - time-warp: something not in the correct age - do without: do not have - law-abiding: obeying the law - patriarchal: ruled by older men - quaint: picturesque - influx: arrival - baptism: Christian ceremony of initiation - life-expectancy: average age that people live - purpose: reason - mains electricity: electricity from the public system - stove: enclosed fire - out of touch: not in contact - cult: tradition -  supplier: a source, person who supplies - opt: choose

Prepositions exercise:
Interactive - fill in on screen or on paper
Replace all the missing prepositions in this extract from the article.

The roadsign is, to say the least, unexpected; driving  a prosperous rural part  North America, the last thing you expect  see  the highway is a yellow diamond roadsign   a horse and buggy  the middle! Watch   horses and buggies  the road? What is this? Do they exercise racehorses here, or what?
You keep an eye open  horses;  two miles you see nothing, then all   a sudden, look! Coming  you  the other side  the road, two black horse-drawn buggies! As they go  , your surprise turns  disbelief; what's going  ? Are they making a movie  eighteenth century America? The men and the women  the buggy look like they jumped   a novel  Fennimore Cooper. Then, another mile and things get even stranger;  a neat-looking farm-house, there is a whole line  buggies.  the door  the house, half a dozen men   black coats, and  long beards, are talking while some women dressed  a curiously ancient fashion are sitting  a bench. Is this 2020 or 1720 ?

You drive  , wondering what has happened  this part  the United States of America? Have you driven  a time-warp, and  realizing it, gone back 300 years, or is it the people you've just seen who're stuck  a time warp?


Using information from the article, imagine an interview with Johan, an 18 year-old Amish youth. The interview should cover the subjects of fashion, leisure, technology, America, and traditions. It should include questions starting:  What ?  Why?  How often?   Do you?  Have you? Do you think? Why?, plus as many more questions as you want.