THE CAR  - a short story

NOW WITH AUDIO. ►: Click to open/close audio player then hit the ► play button 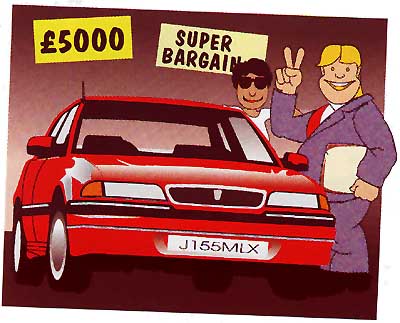 "It's a really good bargain," said the man in the showroom ; and as far as Shafi could tell, he was telling the truth.

"It's yours for just £5,000!" he continued. "You won't find a better buy anywhere else in the North; and what's more, we'll give you a year's insurance with it. Free!"

Shafi eyed the vehicle longingly; it was bright red, and just over a year old - and inside it had that smell of polish that comes with a new car. There was just the  matter of the price - it was more than he had planned to spend on his first car, and more than he actually had available.

"Five thousand?" he asked, hoping rather hopelessly that he had somehow misheard.

"Five grand! That's it. But you can 'ave it for three in cash now, and the rest in three months. You can get a loan from the bank!"

Ever since he'd taken his first job at the burger bar at the age of 17, he'd been saving up for a nice car; of course, he could have made do with a cheap wreck years ago - but that was not what he wanted. Shafi wanted a good car, a nice car, one that would make him feel as if he had achieved something better in life than serving in a restaurant.

He handed over the crisp fifty pound notes. Even if the insurance was only third-party, he reckoned it was a good buy at the price.

Settling in to the driving seat, he adjusted it for position, and turned the key. Within minutes, he had passed the outskirts of Leeds, and was headed for Gemma's house in Frampton. After all, she'd been badgering him to get a car, ever since he'd first mentioned the idea to her a month or so earlier

He knew that she'd be impressed.

"So you bought it at last!" she exclaimed. "Great!" Now we can go places!"

"Let's take it over to Sawby tonight," she suggested. "Jess is on the door, he'll let us in free."

Sawby was only sixteen miles away, but the quickest way to get there was to take the motorway ; and besides Shafi was keen to see how fast he could get the new car up to.

"Hey, take it easy," said Gemma, as the speedometer edged up towards the 100 m.p.h. mark. "You don't want to get done for speeding on the very first day!"

Shafi slowed down; the exit for Sawby was coming up fast.

As luck would have it, there was a space just opposite the club as Shafi proudly arrived in the shining new car. A group of young men watched from the pavement opposite as he carefully parked by the kerbside.

Jess wasn't on the door after all, and they had to pay to get in; but the atmosphere in the club was hot and exciting as usual. It was a popular place, and with some of the best D.J's in the region, it attracted people from all round, even from Manchester.

"So you've got your car at last, eh Shafi, boy!" said a voice in the semi-darkness.

Shafi looked round. He recognised the speaker at once, and was not pleased. It was Rooksby, Gemma's former boyfriend. The three of them had worked together a year ago in a restaurant, until Rooksby was  sacked for insulting a group of foreign tourists.

"A bit too smart for someone like you, ain't it?"

"Oh give over!" said Gemma.

Rooksby gave a sarcastic laugh, and moved away.

It was almost 3 a.m. as they emerged from the club.

"Hey!" exclaimed Shafi, looking across the street. "Where's the car? We left it there, didn't we?."

"Oh no, don't say someone's gone an' nicked it already," Shafi groaned. The tears were already beginning to well up in his eyes.

"What did you do with the keys?" asked Gemma.

"They're here," he answered, rummaging in his pocket. "Or at least I think they are."

He was looking increasingly desperate.

At that moment, a red car roared past them, and disappeared up the road.

"No good  yelling after 'em," said a voice from behind, "Looks like you've lost it, doesn't it, Shafi boy!"

They turned and saw Rooksby again, a wry smile on his twisted lips.

"That's brilliant!" said Gemma. "You bring me out here, then the car gets nicked. How'm I goin' to get home?"

Two weeks later, the police called Shafi's employer, asking for the owner of a red car.

"Yes Sir," said the voice on the other end of the phone. "It's in the pound in Birmingham.... but I'm afraid you can't have it back now."

Shafi felt a lump rising in his throat. "You mean...."

"Fatal accident, Sir. The driver was killed, and the passenger's in intensive care. She's just told us you were the owner of the car."

"She won't give us her name. She just says she wants to see you. She says she's sorry. Perhaps you can help us with our enquiries."

Copyright © Linguapress.  Do not copy this document to any other website
Copying permitted for personal study, or by teachers for use with their students


REPRODUCTION OF THIS SHORT STORY ON ANY OTHER WEBSITE IS NOT AUTHORISED
.

Select the closest equivalent of the following words and expressions used in the story:


Fill in the missing words exercise:

Fill in the missing words in this short extract from the story : you will need to add one or two words in each space


Ever   he taken his first job  the burger bar  the age of 17, he   saving   a nice car; of course, he   made do with a cheap wreck years  - but  was not  he wanted. Shafi wanted a good car, a nice car,  that would make him feel   he had achieved  better in life  serving in a restaurant.


When Shafi wenf fo "help the police with their enquiries"; he was asked a lot of questions. Here are the answers: What were the questions ?

How difficult is this text?  The text scores as C1 level on the CEFR (Common European Framework) scale, yet scores 90 - easy on the Flesch Kincaid scale. Why the difference?
Essentially because the CEFR score ranks a document for difficulty for non-native speakers of a language, whereas the Flesch Kincaid scale grades the difficulty of texts for native speakers. Most of the time the two grading systems produce similar results. However in some cases they do not.
This is particularly the case for texts which include a lot of dialogue and short sentences, as does this short story. The dialogue vocabulary and short sentences make this story easy to follow for native English speakers, but not so easy for students learning English as a foreign language.
With this sort of document, a Flesch Kincaid analysis tends to underestimate the difficulties, even for native speakers. The Linguapress grading for this text, "plain English", takes account of the different grading methods.

Text study: This story is rich in language points, structures, and vocabulary, and the story and narrative technique can provide enough in the way of activities to keep a class going for several hours. Here are some suggestions.


1) None of the characters in the story are ever described deliberately; but by the end of the story, it is possible to characterise Gemma, Shafi and Rooksby quite closely. Have students describe each of them with as much detail as possible.

2) What details in the story suggest that:

a) Rooksby is a racist.
b) Shafi wants to improve his situation in life, but people exploit him.
c) Gemma is dishonest.


1) Have students complete the police interview above.

3) Or do so in first person narrative form, as seen from Shafi's point of view.

English grammar has now got clearer and more understandable

This resource is © copyright Linguapress 2001 -  2020.
Originally published in Spectrum magazine.
Free to view, free to share,  free to use in class, free to print, but not free to copy..
Reproduction is authorised exclusively for use by students for personal use, or for teachers for use in class.  In schools declaring the source of copied materials to a national copyright agency, Linguapress advanced level resources should be attributed to "Spectrum" as the source and "Linguapresss France" as the publisher.
Multicopiage en France: en cas de déclaration CFEDC par l'établissement, document à attribuer à "Spectrum", éditeur "Linguapress"..
Copyright by Linguapress.
If you like this page and want to share it with others,  just share a link, don't copy.