► You are here : Mississippi music


Though New York and Los Angeles are the current day capitals of the American music industry, it is half way between the two of them, in the Mississippi Valley, that the roots of American popular music are to be found. 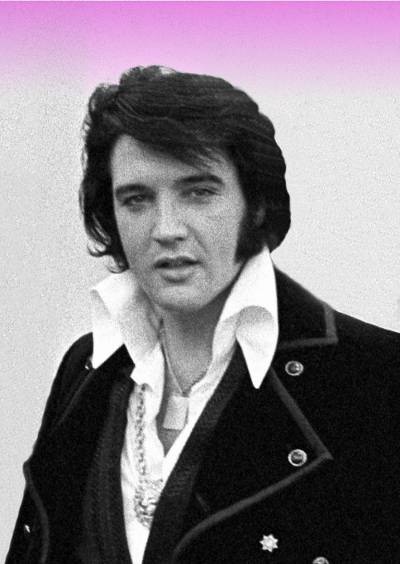 Elvis Presley - surely the most famous musician to have his roots in the Mississippi valley
There are six classic forms of American popular music; jazz, the blues, bluegrass, soul, rock 'n' roll, and country and western.
With the exception of bluegrass and country and western, the Mississippi valley is the birthplace of them all.
Like American culture in general, American music has evolved out of the different traditions that reached the New World from the old. But out of all the different types of music that reached the New World - from England, Ireland, Spain, France, Germany, Africa and many other places - one was to have a particularly significant impact: African music.
While European influences provided melody and a lyric tradition, African influences added a new sense of rhythm and new harmonies, which were to give rise to several new forms of music that were different from anything European.
New American forms of music developed among the slave communities working in the cotton fields near the mouth of the Mississippi; Christianized slaves developed gospel music and Spirituals, which soon became popular far beyond the rural states of the South.
Following emancipation, Blacks had much more opportunity to develop their musical talents, and many did exactly that, adding instrumentation to the essentially vocal tradition of the spiritual.
From the Spanish musical tradition they added the guitar, a popular instrument in the southern states which had been originally colonized by the Spanish. From a more general European tradition they added brass instruments such as trumpets, which were popular with the marching bands used at all kinds of ceremonial events in the American states.
It was thus in the late nineteenth century that two new forms of American music began to develop, both of them in the Mississippi valley.
Firstly there was the blues. In the cotton-growing Delta region of the state of Mississippi (not to be confused with the Mississippi Delta), the blues appeared in the 1870's, sometimes as a purely vocal tradition, at other times using the guitar as accompaniment. It was a form of music through which poor exploited Blacks expressed their sadness and their problems, their "blues". The sadness of the blues is evident both in the music itself, and in the titles of countless popular blues songs, such as Poor Boy Blues, Homesick Blues and many many others. 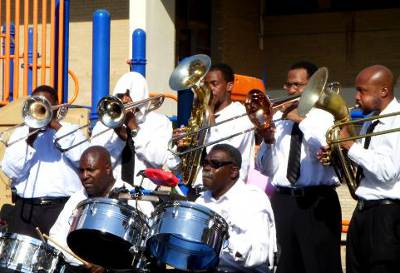 Traditional jazz band
Jazz, on the other hand, developed in and around New Orleans, as a type of music for festive moments and dancing. The most famous jazzman of all, Louis Armstrong (Satchmo) was born in New Orleans.
Both of these forms of music migrated up the Mississippi valley with the Blacks who went north in search of work in the early twentieth century. Satchmo was one of them; he went north, ending up in Chicago, where his "New Orleans Jazzmen" soon established a national reputation, thanks to the development of both radio and the gramophone.
In the 1920's, many of the Blacks who migrated north went looking for jobs in the booming American automobile industry, in and around  Detroit, and it was here in "Motown", i.e. mo(tor) town, that soul music and other new varieties evolved.
With the advent of radio and records, all varieties of black music became increasingly popular. In the north Detroit became the capital of soul music; in the south New Orleans remained the capital of jazz; and between the two, at the heart of the Mississippi valley, Memphis became the center for an exciting new type of music; rhythm 'n' blues.
This music soon attracted the attention not just of Blacks but of Whites too; and with very little change, R & B evolved into yet another new type of music; rock 'n' roll.

The man who did most to help rock 'n' roll conquer first America, then the world, was in fact not a black musician, but a white boy from rural Mississippi, by the name of Elvis Aaron Presley. Elvis's family was poor, very poor; as a kid, Elvis lived in a two-room shack in Tupelo, Mississippi. There was not much to distinguish the lifestyle of his poor white family from that of the equally poor black families in the region, and young Elvis had plenty of contact with black culture and music.
After making his first records in Memphis, Elvis became the biggest rock star the world had ever seen; "the King". Yet he never abandoned his Mississippi valley roots, and it was in Memphis that he established his famous home, Graceland.
In the space of the last sixty years, rock 'n' roll has become the basis of popular music worldwide. In this respect, it could be argued that the Mississippi valley is the source of the greatest cultural phenomenon of the twentieth century.


Printing: Optimized for printing
Copyright © Linguapress.  Do not copy this document to any other website
Copying permitted for personal study, or by teachers for use with their students.

The missing words box contains twenty-five words, in alphabetical order. Twenty four of these words have been taken from the section of the article about Elvis Presley, copied below. Replace each word in its correct place in the extract. This exercise is interactive. One of the words in the first box will not be needed!
To do this exercise on your computer or phone,  select a word in the first box, and move (slide, copy or paste) it to the correct missing word box in the article.

The man who most to help rock 'n' roll conquer first America, then the world, was in fact not a black   , but a white boy from  Mississippi, the name of Elvis Aaron Presley. Elvis's  was poor, very poor; as a kid, Elvis lived in a two-room  in Tupelo, Mississippi. There was not  to distinguish the lifestyle of his poor  family from that of the equally poor  families in the region, and young Elvis had  of contact with black  and music.
After making his first  in Memphis, Elvis became the biggest rock star the world had  seen; "the King". Yet he  abandoned his Mississippi  roots, and it was in Memphis that he established his  home, Graceland.
In the  of the  sixty years, rock 'n' roll has become the  of popular music  . In this  , it could be  that the Mississippi valley is the  of the greatest cultural phenomenon of the twentieth  .

Read through the article, then decide if these statements are right (R) or wrong (W). Rewrite any wrong statements, correcting them as necessary.

1.    The roots of American popular music are mainly African and Caribbean.  R W
2.    Gospel music first developed in the south of the United States.  R W
3.    American slaves often played the guitar as they sang in the fields.  R W
4.    Some of the first blues musicians sang unaccompanied.  R W
5.    Jazz originated with Louis Armstrong in Chicago.  R W
6.    Many Blacks headed north to Detroit because it was the capital of soul music.  R W
7.    Elvis Presley invented rock 'n' roll.  R W
8.    The city of Memphis can claim to be the birthplace of modern rock music.  R W