New Orleans, the great city at the mouth of the Mississippi is one of the most colorful, most cosmopolitan and most European of American cities.
Though very few people in the city now speak or understand much French, New Orleans prides itself on its French heritage. The historic center of the city is known as the French Quarter, and the city is famous across the United States for its restaurants and its "Mardi Gras" celebrations.
It is still one of America's great ports, where goods that have traveled down the Mississippi valley by barge or by truck or by train are offloaded and trans-shipped, to be exported all over the world. 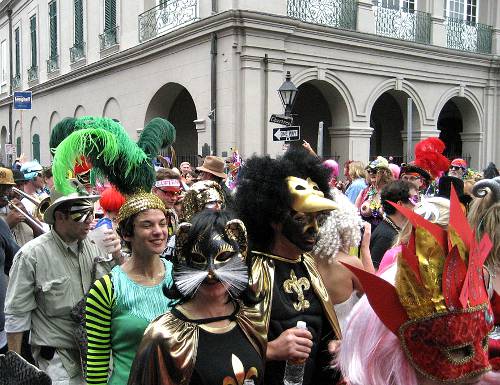 ► For vocabulary guide see below


Mardi Gras, meaning literally "Fat Tuesday" was first celebrated in Louisiana by French colonists in the eighteenth century. It was, in those days, a day of feasting before the start of Lent, the 40-day period leading up to Easter.
As the last "normal" day before the austerity of Lent, "fat Tuesday" was a day to make the most of, a day of carnivals, eating, drinking and revelry. It has remained a day of carnival ever since; but the original French celebrations are just a small part of today's festivities. Mardi Gras, New Orleans style, owes as much to Afro-Caribbean customs and the Latin American carnival tradition as it does to the French colonists who established it in their new city.
The Mardi Gras celebrations actually last for several weeks. About a month before the main carnival, a season of elaborate balls and parties begins: the official Mardi Gras program is published, and shops start selling the very sweet and colorful "King Cake", a delicacy that can only be found during this holiday season.
In other parts of Louisiana, the first Mardi Gras parades actually take place three to four weeks before the big carnival in New Orleans, and even in the city itself, smaller parades begin two weeks before the big day.
My first Mardi Gras party took place in a friend's apartment in New Orleans a few days before the parade. The apartment was decorated out in the season's traditional colors of green, gold and purple; the hi-fi system pounded out carnival music, while the guests danced, talked, and ate King Cake, washed down with "Blackened Voodoo Beer", another specialty brewed in a local brewery.
On Fat Tuesday itself, I joined the hundreds of thousands of local people and visitors, to watch the processions wind their way through the streets of New Orleans. The processions are organized by groups called "Krewes", which each have mythological or historic names, such as Proteus, Endemion, or Bacchus. The one I liked best was Zulu, a parade organized by members of the city's black community, resplendent with its colorful ornate floats and costumes based on African themes.
Perhaps the most astonishing aspect of Zulu and other parades was the "throws". As the floats move slowly through the crowds, tradition has it that those on them should throw all kinds of trinkets into the crowd — plastic necklaces, engraved plastic cups, plastic medallions (a coveted prize) and other souvenirs. Most parade-goers do all they can to catch these materially worthless items, and I found myself quickly caught up in the frenzy, scraping on the sidewalk among the surging spectators to proudly pick up my plastic prize. In the heat of the moment, it's hard not to be caught up in the madness of this ritual, in spite of the worthlessness of the prizes!
Traditionally, people in New Orleans use the "throw cups" they pick up, and decorate their cars or homes with the other souvenirs they take home.
As a Yankee spending my first Mardi Gras in New Orleans, however, I made some mistakes in planning my time. There is so much going on at Carnival time, that you can't see everything, and I was disappointed not to see more of the city's famous Dixieland jazz bands parading through the streets, but obviously I was often in the wrong place at the wrong time.
After a year, I know that I still have a lot to learn about the customs, cultures and traditions of Mardi Gras in New Orleans. This year, I'll try and restrain myself during the throws, so that I won't come home with a bagful of plastic objects that I simply have to recycle. I'll let someone else have that pleasure!

Now in French too ! Recommended for teachers and students

What facts do you remember from the article?

Select the correct words of expressions for each box in this extract.

Perhaps the most astonishing aspect of Zulu and other parades was the "throws". As the floats move slowly through the crowds, tradition  (a is  b is it  c has it) that  (a them  b those  c these ) on them should throw all kinds of trinkets (a at   b in   c into)  the crowd — plastic necklaces, engraved plastic cups, plastic medallions (a coveted prize) and (a other  b others  c anothers)  souvenirs. Most parade-goers do all they can to catch these materially worthless items, and I found (a me   b mine   c myself)  quickly caught up in the frenzy, scraping on the sidewalk (a among   b  for  c through)  the surging spectators to proudly pick up my plastic prize. In the heat of the moment, it's hard (a not to be   b not being   c being not) caught up in the madness of this ritual, in (a account  b spite  c view )  of the worthlessness of the prizes!

Author John Robillard is an American of French ancestry. He wrote this article after moving from New York to Louisiana.