Larry Wood, an award-winning writer on environmental affairs, wrote this original article for Linguapress back in the 1990s.  A quarter of a century later, the problem has not gone away, and indeed may be getting worse, as summer droughts and temperatures reach levels that they have never reached before 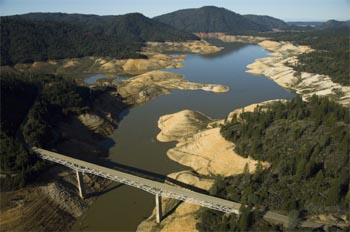 This five-letter word is one that Californians see almost daily in headlines.
How to dam it, how to sell it, how to use it, how to share it, how to keep it pure.... these are just a few of the major problems that face California's people and political leaders.
Thousands of dollars are spent annually on studies, and on lawsuits, in California's "Water Wars", and the seemingly endless conflict between the overwhelming needs of Central and Southern California, and their drain on Northern California rivers.
California has what has been called "the biggest waterworks in history". Dams in the Sierra Nevada mountains hold back water provided by great rivers fed by rain and snowmelt; they tame raging rivers, help prevent damaging floods, generate cheap, pollution-free hydro-electricity, and release a steady supply of water for California's citizens.
California's great cities get their water via an immense network of dams, aqueducts, pipelines and wells that is one of the engineering wonders of the world. Part of the water supply for the Los Angeles area comes from a 445-mile long canal running south from the "Delta" area of Northern California. During its long journey, the water is pumped up a 3000 ft. elevation, then enters a tunnel through the mountains, before reaching the Los Angeles area. More water for this thirsty area is brought in along the Colorado River Aqueduct, over a distance of 185 miles; and the City of Los Angeles also takes water from a place called Owens Valley, 338 miles away!
Even the city of San Francisco, in cooler Northern California, has long-distance water, its supply being carried almost 150 miles from an artificial lake in Yosemite National Park.
Yet mammoth as this interlocking system is, in years ahead it is going to be inadequate to handle the state's rapidly growing population. The prospect of major water problems in the near future has become particularly alarming.
Many California farmers have already had to abandon crops on account of water shortages during recent dry summers; and in many towns and cities, the sprinklers that traditionally keep the lawns green round suburban homes have been turned off.    .

As if dry summers and growing needs were not enough problems already, Californians also have problems getting water from outside their state. For instance, the Colorado river.provides water to several states, and also to Indian reservations, and there has been a lot of argument about water rights. In 2003, the state of California agreed to take a smaller quota of water from the Colorado River - partly to allow the state of Nevada to have more, on account of the dramatic increase in needs of the city of Las Vegas. 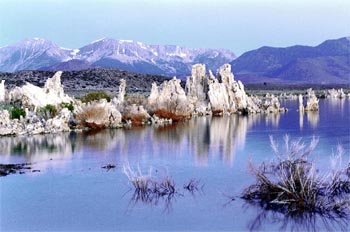 One of the most serious environmental problems was that of Mono Lake. In 1989, California's State Legislature voted $65 million to find alternatives to save Mono Lake from evaporating in the desert sun of Eastern California. Since then, the depletion of this unique environmentally-sensitive lake has been reversed, and though the water level today is still some 35 ft.  below the natural level recorded back in 1941, it is now 10 feet higher than it was at its lowest point, in 1982.

Since the year 2000, California has had a series of drought years with below normal rainfall. Emergency water conservation ordinances have made lawns turn brown, cars and sidewalks get dirty. Violators of the ordinances have had their water supply cut to a trickle. In Fresno, a city which does not even meter how much water its residents use, the wells have already run dry..
Water conservation measures are part of the answer; but political analysts predict that it will require many years and some serious and unattractive lifestyle changes to resolve California's Water Wars. The tense competition for a scarce resource, among groups with conflicting interests, will demand give and take forever.

Updated 2021 from an article in Spectrum magazine, by Larry Wood.
Larry Wood is a prizewinning freelance environmental  journalist, based in California.

Creative writing: Produce projects for authentic documents (in English) for distribution to the public. Try to achieve maximum realism in this task. .

Memory & logic cloze exercise: Fill in the blanks in this extract from the text, using the qualifiers (adjectives, etc.) listed: you can slide, or copy and paste, words from the list into the boxes. You will probably need to refer back to the original article above to look for many - if not most -  of the answers.


California's   cities get their water via an network of dams, aqueducts, pipelines and wells that is one of the wonders of the world. Part of the supply for the Los Angeles area comes from a long canal running south from the "Delta" area of Northern California. During its journey, the water is pumped up a elevation, then enters a tunnel through the mountains, before reaching the Los Angeles area. More water for this area is brought in along the Colorado River Aqueduct, over a distance ; and the City of Los Angeles also takes water from a place called Owens Valley, !
Even the city of San Francisco, in Northern California, has water, its supply being carried almost 150 miles from an lake in Yosemite National Park.
Yet as this system is, in years ahead it is going to be to handle the state's population. The prospect of problems in the future has become .

Going further: Write down the potential consequences of changing rainfall patterns, both direct and indirect. Draw up a contingency plan for your area, should your own water supply be threatened.

The cloze exercise above is deliberately diffficult. It is not just a simple testing exercise designed to check how much vocabulary students have acquired (as used for the purposes of testing in Cambridge and other exams), this type of cloze exercise is a learning activity designed to make them read a text word by word, understand how words are used together, remember them, and what they mean.