For Americans, the most important street in the USA is Wall Street

In the United States of America, there are plenty of famous streets. But of all the streets in world, there is one which is in the news every day: WALL STREET . This is the street on which fortunes are made and lost. But more generally what goes on on the street is of vital interest for most Americans..... and the rest of the world too. As they say, when Wall Street sneezes, America catches cold. 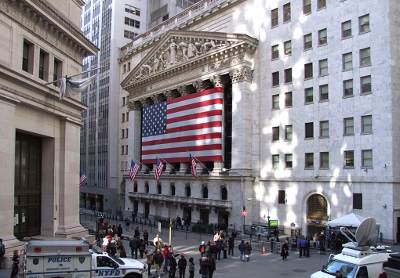 Say "the streets of New York" to a non-American, and he'll probably think of Times Square, Madison Avenue or Broadway; but mention the subject to an American and for many the first name that comes to mind will be Wall Street.
For many, Wall Street is indeed just "the street", probably the most important street in the USA or even in the world; for what goes on on Wall Street, more perhaps than what goes on in Congress, can have a direct influence on the lives of everyone in the USA, if not most people in the world.
Wall Street is of course the home of the New York Stock Exchange, the financial heart of the American business world. Each day, billions of dollars of shares are traded on the floor of the stock exchange on behalf of companies, pension funds and private individuals wanting to protect their investments or their life's savings, and make sure that they too are on the bandwaggon of prosperity. 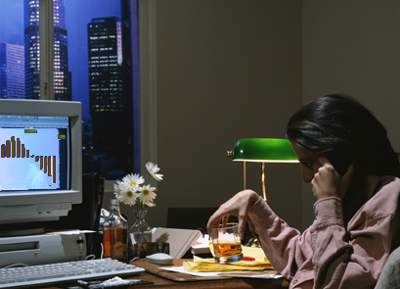 Wall Street's ups and downs affect the lives of most Americans

The New York Stock Exchange is the biggest and most active stock exchange in the world; over half of all adult Americans have some, if not all, of their savings invested directly on Wall Street, so it is not surprising that the fluctuations of the Street's famous indexes, the Dow Jones and the Nasdaq, are followed daily by millions of ordinary Americans. When the Dow and the Nasdaq are on a rise, millions of Americans feel more prosperous; when they are falling, millions start feeling worried about their financial security and their retirement years. Yet more importantly, when Wall Street booms it is a sign that the American economy is booming, creating jobs and prosperity for people throughout the nation; when Wall Street slumps for more than a short period, it is because the American economy is slowing down, putting investment and jobs at risk.
Nevertheless, in spite of its periodic crashes and downturns, most Americans know very well that by investing directly in the stock market, they are probably ensuring the best possible long term return on their investments.
Over time, direct investments on Wall Street have always done better than most other forms of long-term placement, and logically speaking this is inevitable. Ultimately, most forms of investment depend on the performance of the US economy in general, and by investing directly on Wall Street, American investors are simply ensuring that they personally take full advantage of the growth of the stock market, rather than share their gains with banks, investment trusts or other intermediaries offering investment services.


CRASHES ON THE STREET

For teachers and students

The risk of a crash on Wall Street is a reality that must always be borne in mind: Wall Street "crashed" most spectacularly in the fall of 1929, when share values dropped over 50% in the space of a few days. By the time the fall bottomed out in 1932, over 80% had been "wiped off" the value of shares on the American stock market, and the Great Depression had begun.
Before 1929, as the stock market boomed, over a million Americans had been speculating on the Street, borrowing money that they did not have in order to buy shares for sale at a profit. When the crash came, hundreds of thousands of these speculators, both individuals and companies, went bankrupt, causing immense distress and poverty.
More recently, Wall Street crashed in 2007 - 2008, almost triggering a collapse of the world financial system. When the stock market eventually stopped falling in March 2009, it had lost 54% of its value, and many people had lost their life's savings.
Previously in 1997, almost over a third of its value was wiped out in a few days; but this time the consequences were less dramatic. While most Americans saw the value of their savings tumble, few went bankrupt as a result.

In today's America, borrowing money solely for the purpose of speculating on Wall Street is not a common habit, so the money that was "lost" in recent crashes was mostly money that people owned themselves, not money that they owed to someone else.
One day no doubt, in some unforeseen future, Wall Street will crash spectacularly again; but when that happens there will have to be both a cause and an effect. The most likely cause will be a major world crisis; the most likely effect, given today's "global economy", will be a major economic catastrophe around the world, perhaps similar to the hyperinflation that affected Germany under the Weimar republic.
If that happens, society as we know it will grind to a halt, and most forms of saving, except perhaps gold and real estate, will lose most of their value; until that day, Wall Street will remain as one of the nerve centers of the global economy.


Copyright notice.
This resource is © copyright Linguapress  2000 . Updated 2020.   Based on an article originally published in Spectrum magazine.
This text may not be reproduced on other websites nor in printed form without written permission from the publishers. Reproduction is authorised exclusively for personal use by students, or for use by teachers with their classes.


Student worksheet
Wall Street Culture
Word endings. Replace all the missing endings in this extract from the article.
Some of the endings test your grammar, others test spelling, and a few test if you have learned all the vocabulary.

The risk of a crash on Wall Street is a real that must always be b in mind: Wall Street "crashed" most spectac in the fall of 1929, when share values dro over 50% in the space of a few days. By the time the fall botto out in 1932, over 80% ha been "wiped off" the value of shares on the American stock market, and the Great Depre had beg .
Before 1929, as the stock market boo, over a million Americans had been specula on the Street, borro money that they did not, have in order to buy shares for s  at a profit. When the crash c, hundr of thousands of these speculat both individ and companies, went bank, caus immense distress and pov.
More recen, Wall Street crash in 2007 - 2008, almost trigge a collapse of the world financ system. When the stock market event stopped fa in March 2009, it ha  lo 54% of its value, and many people ha  lo their life's sav.
Previ in 1997, almost  a th of its value was wiped out in a few days; but this time the consequ were less dram. While most Americans saw the value of their sav tum few went bank as a result.

Gap fill exercise
This exercise tests a) memory, b) spelling and c) grammar.

This resource -  © copyright Linguapress  1999 - 2020.
Photo by Andy C - licenced under creative commons.
.
Reproduction is authorised exclusively for personal use by students, or for use by teachers with their classes.