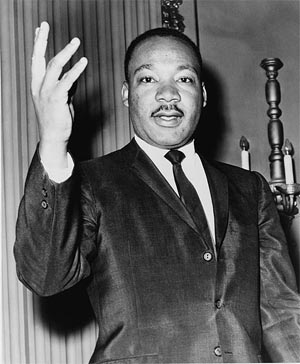 On the night of April 4th 1968, someone was waiting opposite the windows of the Lorraine Motel, in downtown Memphis.
In front of the motel, a big white Cadillac was parked; it was the car in which the Rev. Martin Luther King was being driven round, as he traveled through the southern states, speaking to audiences in towns and cities, promoting the cause of non-violence and civil rights.
When King stepped out onto the balcony, to take a breath of fresh air after eating his dinner, a shot rang out. The civil rights leader and Nobel-prizewinner, the man who preached non-violence, fell to the ground, fatally wounded. Within minutes, he was dead.
The news spread like wildfire round the USA; the man who had done more, perhaps, than any other to further the rights of Black people in the United States of America, had been assassinated, it seemed, by a lone sniper, a white extremist. Weeks later a man by the name of James Earl Ray was arrested and sentenced to 99 years in prison for the assassination. But is that really what happened?
Though James Earl Ray initially confessed to killing King, it was not long before he retracted his statement; and to this day, there are those who do not believe that Ray was actually guilty of the crime for which he spent almost 30 years behind bars.
Indeed, even Dexter King, Martin Luther King's son, believed that Ray was not his father's assassin.
But if Ray did not do the deed, who did? And why? Was it just a pure racist crime? Or was this a political assassination ordered by some faceless figures in some secret service? The theory that King was really assassinated by the Secret Service has been growing more and more popular over recent years, and was even the subject of an "X-Files" episode. So how real is the conspiracy theory? And what reasons might anyone other than a racist have had to get rid of a charismatic and peaceful leader like Martin Luther King?

The Lorraine Motel, with the balcony on which King was assassinated and a 60s Cadillac like the one in which King was traveling
We have to take ourselves back to 1968. Since 1955, King had been at the front of the Civil Rights movement in the USA. He had given great support to the year-long bus boycott in Montgomery, Alabama, which eventually led to the desegregation of public transportation; he had used his skills as a passionate orator to inspire black people to stand up for their rights, in housing, education and other civil rights; and he had gained the backing of a growing number of whites. He was in the front line of the anti-segregation demonstrations in Birmingham, Alabama, in 1963, which probably did more than any other protest to further the cause of civil rights.
During his brief presidency from 1960 to 1963, Kennedy paved the way for a Civil Rights Act, which would officially ban race-based segregation throughout the USA. Though Kennedy was gunned down before he had time to put the act through Congress, Lyndon Johnson completed the job, and by the end of 1964, the Civil Rights Act was law, and Martin Luther King had won the Nobel Prize for Peace.
Racism, however, had not disappeared. More laws, including the 1968 Civil Rights Act, were needed to fully eradicate all forms of official racism. But even then, laws could not change the deep-seated bigotry of many southern whites; the more Civil Rights laws were passed, the more some racist groups felt threatened.
1968 was a crisis year in many countries. The Civil Rights movement in the USA had more or less merged with the anti-Vietnam War movement. Black leaders like King were being joined by the pacifist gurus of a new generation of educated young white Americans, Bob Dylan and Joan Baez. At the same time, in the black ghettoes of the rustbelt cities, a new and more aggressive movement had emerged: Black Power.
In the opinion of some observers, America was slowly sliding towards civil unrest on a large scale. Though King, with his non-violence, was no supporter of civil conflict, he was the no.1 figurehead of black America. Hence the conspiracy theory.
According to the theory, King was assassinated by the government (whoever that may have been) to prevent the USA from severe civil conflict. A week before King was assassinated, a peaceful march in Memphis had been provoked into violence by a gang called "the Invaders". Nobody knows who was behind the Invaders - but someone was.
James Earl Ray admitted that he was involved in the assassination of King, but claimed that he was part of a plot, the dumb guy who was used by others who tricked him into it. He claimed that the gun that killed King was actually fired by a man called "Raoul" - but who Raoul was no one knows. Dexter King, who studied events surrounding his father's death in the minutest detail, believed that Ray was telling the truth.
New scientific tests suggest that it was not Ray's gun that fired the bullet that killed King.
So if it was "Raoul", not Ray, that really assassinated Martin Luther King, why did he do it, and on whose orders? Was it the CIA, or some other secret organization, nervous about rising black militantism and opposition to the Vietnam war? Or was King's assassination masterminded by some secret white supremacist organisation?
Maybe we will know one day, maybe not.


English grammar has now got clearer and more understandable

Copyright notice.
This resource is © copyright Linguapress 1992 - 2020.   Originally published in Spectrum magazine.
This text may not be reproduced on other websites nor in printed form without written permission from the publishers. Reproduction is authorised exclusively for personal use by students, or for use by teachers with their classes.

Vocabulary exercise
Select the best equivalent of the following words used in the article:

1. Why did more and more people call for the release of James Earl Ray?
2. Why do some people believe King was assassinated by the CIA?

Interactive gap-fill exercises.  Use on screen or on paper

1. Tenses
After reading the article, replace the verbs and participles in this extract in the correct form.
To save your answers, take a screenshot when you have completed the exercise.


Grammar :  Tenses
After listening to (or reading) the article, students should replace the verbs and participles in this extract in the correct form.

On the night of April 4th 1968, someone (wait)  opposite the windows of the Lorraine Motel, in downtown Memphis.
In front of the motel, a big white Cadillac (park)  ; it (be)  the car in which the Rev. Martin Luther King (drive round)  as he (travel)  through the southern states, (speak)  to audiences in towns and cities, (promote) the cause of non-violence and civil rights.
When King (step) out onto the balcony, (take)  a breath of fresh air after (eat)  his dinner, a shot (ring)  out. The civil rights leader and Nobel-prizewinner, the man who (preach)  non-violence, (fall)  to the ground, fatally (wound)  Within minutes, he (be)  dead.
The news (spread)  like wildfire round the USA; the man who (do)  more, perhaps, than any other (further)  the rights of Black people in the USA, (assassinate)  it (seem)  , by a lone sniper, a white extremist. Weeks later a man by the name of James Earl Ray (arrest)  and (sentence)  to 99 years in prison for the assassination.
But is that really what (happen)  ?
Though James Earl Ray initially (confess)  to (kill)  King, it was not long before he (retract)  his statement; and to this day, there are those who (not believe)  that Ray (be)  actually guilty of the crime for which he ( spend)  almost 30 years behind bars.
Indeed, the calls for Ray's release (grow)  stronger by the year, to the point that even Dexter King, Martin Luther King's son, now (believe)  that Ray was not his father's assassin.


Language points: two language points are particularly in evidence in this text; (a) tense usage, and (b) prepositions.

As far as tenses are concerned, pay particular attention to the different forms of past tense, preterite, present perfect and pluperfect. In particular, note the uses of the pluperfect, which in English is only used to put one past event further into the past than another past event that is being mentioned. For example:
The news spread (that) the man who had done..... had been assassinated....
Imagine how the original news was reported. (The man who has done.... has been...).

Creative writing: Using information from the article, imagine how the news of Martin Luther King's assassination was reported in the press next day.

Dialogue: (pair work) In pairs, students should script and act out an imaginary interview between the owner of the motel and a local journalist on the day following the assassination.


Classroom use.
Multi-copying of this resource is permitted for classroom use. In schools declaring the source of copied materials to a national copyright agency, Linguapress intermediate level resources should be attributed to "Spectrum" as the source and "Linguapresss France" as the publisher.
Multicopiage en France: en cas de déclaration CFEDC par l'établissement, document à attribuer à "Spectrum", éditeur "Linguapress"..

Photo Lorraine Motel by Julia5136 -  First published in Spectrum, the advanced level English newsmagazine.
All articles published on this website remain the copyright © of Linguapress.com and/or their individual authors.
Reproduction is authorised exclusively for use by students for personal use, or for teachers for use in class