► You are here:   LInguapress English  ›
Intermediate reading  ›
Fish and chips

It is the original British fast food. Fish 'n' chips, the original "carry-out" meal, has been part of British life for well over 100 years. But will it survive much longer? Perhaps only in the form of a luxury for those who can afford it. 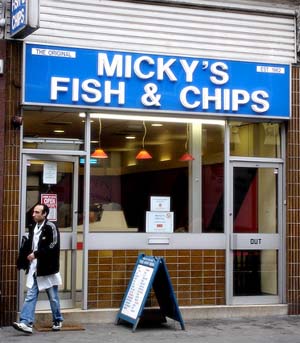 Long before the Big Mac was invented, Britain had its own national form of fast food.

"When I was a young man, it was the sort of thing you'd have once or twice a week," remembers 82-year old Arthur Mowbrey. "Sixty years ago, you'd get a full size portion of cod and chips for sixpence. It was cheap, and good."

Fish 'n' chips was nourishing too. It was a proper meal, that you could eat in the street on your way home from work, or during the lunch-break. Wrapped in newspaper, it would keep warm to the last chip, even on the coldest days of the year.

In the last quarter of a century, things have changed.

"It's not so popular with young people these days," says Lizzie, a teenager. "Most of the time, if young people want to eat out, they'll go for a hamburger or something like that, or a Chinese take-away. Fish 'n' chips is a bit old-fashioned really, I suppose. But there are still cheap chip shops around. I had fish 'n' chips about three weeks ago. We sometimes have it at home, and we go and get it from the chip shop. It saves cooking!"

Thousands of chip shops, however, have closed in the last twenty-five years. Some have been turned into Chinese or Indian take-aways, others have just closed. They have survived best in seaside towns, where the fish is really fresh, and people visit them more as a tradition than for any other reason. Yet nothing, perhaps, can save the classic fish 'n' chip shop from extinction. Fish 'n' chips wrapped in newspaper is already just a memory of the past. British and European hygiene rules no longer allow food to be wrapped in old papers, so today's carry-out chip shops use new paper or styrofoam cartons. Of course, you can still eat fish and chips with your fingers if you want, but there are now plastic throw-away forks for those who don't want to get greasy fingers!

Yet in spite of these changes, the classic fish 'n' chip shop could disappear from British streets in a few years' time, for a completely different reason; lack of fish.

For over twenty years, European agriculture ministers have been trying to solve the fish problem, but with little success. As a result of modern industrial fishing, some types of fish are facing extinction in the North Sea and Atlantic. "Overfishing in the North Sea has reached crisis levels," say Greenpeace. Quotas have been introduced, but each time there are new restrictions, fishermen in Britain, France, Spain and other countries protest, because jobs are lost.

Sadly, this is inevitable; and unless strict quotas are applied, thousands of European fishermen could lose their jobs, as there will be few fish left to catch (at least, few of the kinds of fish that people want to eat). One way or the other, sea fish will become rarer, and therefore more expensive.

The gradual disappearance of the traditional British fish 'n' chips shop is therefore bound to continue. Fish and chips, however, will survive as a speciality in pubs and restaurants, and in new up-market fish restaurants. Comfortable, more expensive fish restaurants, with chairs and tables, have existed for a long time of course, alongside stand-up carry-out fish 'n' chip shops. In the years to come, they may be the only type of fish 'n' chip restaurant to survive.

Every town in Britain had its fish 'n' chip shops. No British town is more than 150 km. from a sea port, and most are much closer; once railways were built in the nineteenth century, fresh sea fish could easily be bought in all British towns. Cheaper than meat, sea fish became a popular source of protein ; by 1870, "fish and chip shops" were springing up all over the country. For a hundred years, they were the classic popular restaurant, British style.

carry-out: meal to eat in the street - can afford: have enough money for - cod: a type of fish - nourishing: of good quality -- break: period of rest - wrapped: done up, contained - quarter of a century: 25 years - take away: carry-out, restaurant - saves cooking: means that there is no need to cook anything - extinction: disappearance - styrofoam: polystyrene - lack: absence - solve: find an answer to - inevitable: certain to happen, unavoidable - bound to: certain to - up-market: high quality - alongside: beside - spring up: appear


Return to Linguapress site index
Printing: Optimized for A4 printing
Copyright © Linguapress.  Do not copy this document to any other website

Here is a short résumé of the article. Unfortunately, it contains twenty mistakes. Most mistakes concern single words, others concern expressions. Can you pick them out, and correct them, changing the text as little as possible.


Fish `n' chips is the original English form of fast food. In the past, many people used to eat fish `n' chips and newspaper every day, neither at lunch time nor on their way to work. But today things have changed. Young people never eat fish `n' chips, as they prefer Chinese hamburgers and takes-away.
Today, there are a thousand less chip shops than there were twenty years ago, though they are already popular at the seaside, where the chips are fresh.
However, many more traditional fish `n' chip shops will certainly appear in the coming years, because of a like of fish. People are fishing so much in the North Sea and the Baltic, because there are no restrictions or quotas. Soon, there will be thousands more jobs for fishers in Europe, as there will be more and more fish to catch. Fish `n' chip shops are therefore bound to continue as a great British tradition.


This teaching resource is © copyright Linguapress renewed 2019.
Revised 2019 . Originally published in Freeway, the Intermediate level English newsmagazine.
Republication on other websites or in print is not authorised


Copyright notice.
All articles published on this website remain the copyright © of Linguapress.com and/or their individual authors.
Reproduction is authorised exclusively for use by students for personal use, or for teachers for use in class.
Copyright 1997 - 2015
Multi-copying of this resource is permitted for classroom use. In schools declaring the source of copied materials to a national copyright agency, Linguapress intermediate level resources should be attributed to "Freeway" as the source and "Linguapresss France" as the publisher.
Multicopiage en France: en cas de déclaration CFEDC par l'établissement, document à attribuer à "Freeway", éditeur "Linguapress"..