► You are here:   English reading resources  ›
Intermediate English  › The Derby

The oldest and perhaps the most famous horse-race in the world.

The Derby in 1821, by the French artist Géricault

Talk about sport in any language, and sooner or later you'll find yourself using English words. The British were the first people to write down standard rules for a lot of sports, even in sports like tennis which was invented by the French, or golf which was probably played in Holland, before becoming a national sport in Scotland.
As the rules of lots of different sports spread all over the world, so did the language of sport. In the world of horse-racing, words like groom and lad and steeplechase spread to other countries; so too did the word "Derby". The word came to mean an important race, usually between horses. One of the most famous horse races in Ireland is called the Irish Sweeps Derby, and one of the most famous American races is called the Kentucky Derby.
But where did this word come from? Why a "Derby"?

Just like "Rugby", "Derby" (pronounced "Darby") is the name of a town in the middle of England; it is also the name of England's most famous horse race, The Derby. But the Derby is not run in the town of Derby, of course! That would be too simple ! 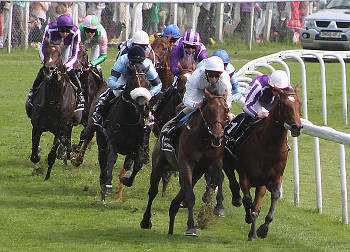 The Derby in modern times
Today the Derby has the reputation of being the world's most famous classic horse race. It is certainly the oldest and one of the biggest. Some years, over 600 horses are entered for the race; however only about 25 of them will actually take part in the great race on Derby day at the beginning of June.

Legend has it that  the Derby was born during a dinner party in the year 1779, at the house of a nobleman, the Earl of Derby, near Epsom, a quiet village about 20 miles to the west of London. Like most aristocrats of the day, the earl loved horse-racing, and the open hilltops near his house were an excellent place for his jockeys to test their skills and speed against challengers. At the dinner party, the earl's friends decided to organise a big race for three-year old horses, and in respect for their host, they called it "the Derby".
Very soon, the Derby became the most popular horse race of the year. People could easily drive out in their carriages from London to watch the big race. In 1788, the Prince of Wales came to watch the race for the first time, and by the year 1800  the Derby had become an important date in the annual social and sporting calendar.
It didn't just interest aristocrats, of course. Though most racehorses at the time were owned by aristocratic families, horse-racing was a very popular sport with ordinary people too, as it still is today. In 1847, the House of Commons decided that it should not work on Derby Day. By doing so, it virtually made the day into a national holiday, as other people followed the parliamentary example.
From then on, thousands of ordinary people from London would crowd onto the trains on Derby Day, to enjoy a day at the races, a bit of excitement, and a breath of fresh air.


Death at the Derby
The Derby has figured more than once in British history. The most dramatic event took place in 1913, when a woman called Emily Davison ran out in front of the King's horse, and tried to grab it. The horse and rider and Emily all fell to the ground in the confusion, and Emily was killed. Emily was a "Suffragette", a militant campaigning for women's votes. In those days, only men were allowed to vote in elections in Britain, and Emily belonged to a group fighting with determination for women's rights.
Emily did not die completely in vain. Though the First World War delayed things by a few years, some women got the vote in 1921, and complete voting equality with men was achieved in 1928.
The Derby was one of the first sporting events to be shown on television. In 1932, long before public TV broadcasts began, the race was shown on closed circuit television to a select audience in the Metropole Cinema, in London. Then, in 1946, it was one of the first sports events to be broadcast on BBC television.

Today, the Derby is watched on TV by millions of people all over Britain, and in other countries too, thanks to satellite communications.
While some people just watch it for the thrill of the race, a lot more watch it for the money. Betting (putting money) on horses is a very popular activity in Britain, and the Derby is the second biggest race of the year, in terms of money. It's impossible to know just how much money is bet on the Derby, but the figure is enormous. Betting starts months before the race actually takes place. Some people want to get in big bets on their personal favourites, before the odds are too low. Some professional gamblers bet sums of money greater than £10,000!
For most people though, bets are more likely to be in the range of a pound or two. On Derby Day last year, it was estimated that a total of over £35 million was gambled on this single race!

WORD GUIDE
spread: extend - groom: person who looks after a horse - steeplechase: race with jumps - race: competition of speed - - skills: abilities - host: person who invites other people - grab: seize - to broadcast: to transmit - the odds: the factor by which a bet is multiplied if the horse wins. gambler: a person who plays with money - single - one.


Return to Linguapress site index
Printing: Optimized for A4 printing
Copyright © Linguapress.  Do not copy this document to any other website

Replace the missing prepositions in the following extracts from the article


Answer these questions in your own words


Listening:
When you listen to the audio recording of this article, look out for the small differences between the written article and the recorded version. These mostly involve synonyms.

Copyright information.
Free to view, free to use in class, free to print, but not free to copy to other websites.


Multi-copying of this resource is permitted for classroom use. In schools declaring the source of copied materials to a national copyright agency, Linguapress intermediate level resources should be attributed to "Freeway" as the source and "Linguapresss" as the publisher.