If you know about cars, the "Mini" is a legend; and in that legend there is one very special type of Mini that is an even bigger legend; the Mini Cooper. 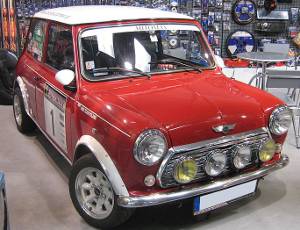 An original Mini Cooper
The original "Mini", which first came out in 1959, remained in production for over 40 years - an incredible success story in the rather unsuccessful modern British car industry. And for most of that time, the most exciting Mini of them all was the Cooper.
During the 1960's in particular, the Mini Cooper was the car of the stars. Mini Coopers won the Monte Carlo Rally four times in a row, from 1964 to 1967 (though the 1966 result was contested); they also won races and other rallies throughout the world. Everyone, film stars, pop stars, sports stars, wanted to have a Mini - preferably a Mini Cooper.
The production of Mini Coopers ceased in the 1970's, but people kept wanting them; so the Cooper Car Company - who designed and made Cooper engines for the Mini - sold conversion kits, to change ordinary Minis into Mini Coopers.
In the 1990's - after 17 years - Rover (who then owned the Mini marque) brought back the Mini Cooper , and new Mini Coopers again rolled off the production line. As before, they were all quickly snapped up by keen buyers - proving that the legend was still very much alive!
Nevertheless, when production of the old Mini came to a stop, that meant the end of the line for the original Mini Cooper; but not for long! 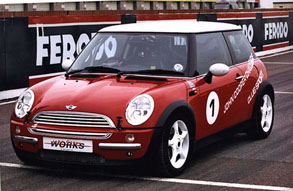 BMW, who had taken over Rover, had already decided to bring out a new Mini, and with it a new Mini Cooper!
The new Mini Cooper was thus launched on 1st December 2001, and within a few days all the original batch of cars had been sold! All over the world, racing teams were desperate to get hold of one of the new cars, and to be the first to revive a great legend on the race track or in rallies. And the new Mini Cooper has played a big role in some recent films, such as the remake of the "Italian Job".     The new ordinary Mini has certainly achieved the same commercial and popular success as its ancestor; there are waiting lists for the new cars in many countries, including the USA! The legend of the Mini is now over fifty years old; and it is still going strong !

The Cooper Works is one of several small British companies, which have a high reputation in the world of motor engineering.
Other similar companies include MacLaren and Williams (for Formula 1 cars), or Morgan and Lotus for sports cars.
The Cooper Car Company was started by Charles Cooper and his son John, just after the Second World War. Coopers specialised in building high performance cars for racing and motor sport - from Formula 1 to rally cars. They were in fact the biggest of the post-war "privateers", small companies who designed and built racing cars for private individuals. One of their customers was Stirling Moss, the great F1 champion.
Today both John and Charles Cooper are dead; but Michael Cooper, John's son, is still in the company, helping to keep up its long reputation.
..

WORDS A-Z
achieve: obtain - batch: group - cease: stop - customer: client - event: special occasion - for long: for a long time - get hold of - obtain - in a row: in succession, one after the other - keen: avid, very determined - kit: equipment - launch: bring out -  marque: name, brand - preferably: and they preferred to have - remain: continue - snap up: buy very quickly -


Printing: Optimized for A4 printing from the Firefox browser
Copyright © Linguapress.  Do not copy this document to any other website
Copying permitted for personal study, or by teachers for use with their students

Find the preterite form of the following verbs in the text:

Pay attention to the verbs below, which are used in the article. ....Do you know, or can you guess, the meanings of each of these?

Came out
Bring back
Snap up
Take over
Bring out
Get hold of
Find out
Keep up.

In the following extract from the article, replace the definite articles where they are needed.... but do not replace them where they are not possible!!
Remember, you NEED a definite article with a singular count noun (countable item), you do NOT NEED one with generalisations. You also need an article in cases of normal apposition.
In some cases in English, there may be a choice: but not in the exercise below!!

Other similar companies include MacLaren and Williams (for Formula 1 cars), or Morgan and Lotus for ( _____) sports cars.

Here are some answers: Make up appropriate questions to which they could correspond.

d) Because production of the Mini Cooper ceased.

e) Because production of all Minis was stopped.

Simple technical English.
There should be plenty in this text, and the accompanying worksheet, to keep students busy.
One point not exploited in the worksheet is the use of compound nouns in technical English.
The English language is very flexible when it comes to making compound nouns. And it's easy too. Just stick two nouns together, and you have a compound. No need for endings, no need for prepositions. All that is needed is to make sure that the nouns are in the right order! The main noun last.
Look for compounds in this article, and have students try and explain what they mean.
Here are a couple of examples:
the British car industry : the people and companies who manufacture / make cars.
the Monte Carlo rally : a rally that finishes at Monte Carlo.
film stars : actors who are very famous
and so on....

Click here for a guide to using definite articles in English


This teaching resource is © copyright Linguapress
Revised 2017 . Originally published in Freeway, the intermediate level English newsmagazine.
Republication on other websites or in print is not authorised

Copyright notice.
Free to read, free to use, free to print, but not free to copy to another website

Teachers are free to reproduce these resources on paper for use with their classes, and students are free to print out personal copies of materials from Linguapress.com.

Updated 2015 from an article originally published in Horizon, the Easy-intermediate level English newsmagazine.