How to use verbs with prepositions in English, and how to distinguish between them

Phrasal verbs, also called particle verbs, are reputed to be the hardest point or English grammar to master. Why does one say:

I looked it up on Google,
but    I looked for it on Google?

To answer this question, we first need to understand that with transitive verbs there are two different verb+particle combinations in English; on the one hand there are phrasal verbs; on the other hand prepositional verbs. One big problem here is that many guides to English use the expression "phrasal verb" indiscriminately to describe every situation in which a verb is followed by a preposition or a particle. To avoid this problem, let’s start by defining some terms.

To see the differences in transitive contexts, compare the following examples:
► The examples on the yellow lines use phrasal verbs (or particle verbs) . The preposition is an integral part of the verb, defining its meaning:  these verbs are in effect two-word verbs. A pronoun object must come between the verb and the particle 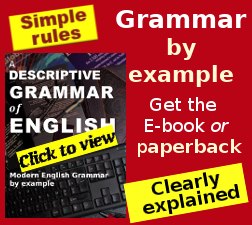 Almost all possible combinations of these verbs with the particles indicated will be separable. Note that each root verb will only combine with certain particles, not all of them.


Flight BA04 to New York will take off at 12.33.
I slipped over on a banana skin and broke my leg.
Several students showed up late
Covid-19 first broke out in China
Tomorrow morning, we all have to get up at 5.30.
Once the Queen had taken her place, the guests all sat quietly down.
The alarm went off just as the bank was shutting.

General
Most verbs follow the rules outlined above; some do not. As with so many rules, there are exceptions. The most prolific exceptions are with the verb get (see below), but there are also a number of verbs, for example verbs with into or round, that do not reflect the general rules. We can say turn into something, or turn something into… but the meanings are different. We say to look round a house, but to take something round to someone’s house. Examples like these just have to be learned.

Shop safely from or in the UK
clothes,  fashion,  souvenirs, British specialities, sportswear

Copyright information.
Copyright by Linguapress. Free to view, free to share,  free to use in class, free to print, but not free to copy..
If you like this page and want to share it with others,  just share a link, don't copy.