► You are here : The story of the Skyscraper

The story of the skyscraper

America has given a lot of things to the world; but in terms of  urban lifestyle, none is as significant and as visible as the skyscraper

Tall buildings, their tips sometimes hidden in the clouds, skyscapers have become the symbol of modern urban civilisation, and today they are found worldwide. But until the mid 20th century, they were very much a distinctive feature of the American city.

The skyline of Manhattan

If you ask a person to describe an American city,  the chances are that he will mention the word skyscraper. Tall buildings, their tips sometimes hidden in the clouds, have become the symbol of the American metropolis, a symbol of  twenty-first century urban civilisation.  American cities have not always had skyscrapers, but it is now almost a century and a half since the first skyscrapers began to distinguish their skylines.

For millions of people coming to America from Europe, the first proof that they had reached a new world was the moment when they first caught sight of the skyline of Manhattan. Surrealistic, superhuman, the skyline was like nothing they had ever seen in the old world — a concentration of tall buildings, their tops scraping the sky, hundreds of feet above the ground. These were New York's famous skyscrapers! This was America! 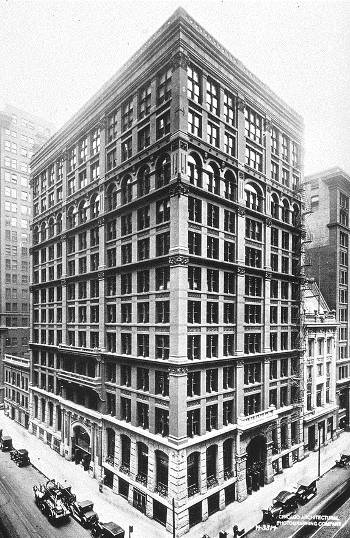 The first skyscrapers, however, did not develop in New York, but in Chicago, in the late nineteenth century. Chicago at that time was the boom town of the United States — New York was just the front door. Chicago was at the centre of the new American adventure, and the new adventure was the West. Chicago was the point at which the West began.

In the year 1871, a large part of booming Chicago was destroyed as a major fire engulfed much of the downtown area. The fire, however, was a great stimulus to architects: not only did it show them the need to design modern buildings that would not be liable to burn very rapidly, but it also gave them plenty of opportunities to put their new theories into practice.

By the late 1800's architects and engineers had made great steps forwards. Until the nineteenth century, the height of buildings had been limited to a maximum of about ten stories as a result of the building materials used — wood, brick or stone. With the exception of churches and cathedrals, few earlier buildings went higher than this, because they could not do so. And even the great churches of mediaeval Europe had to respect basic mechanical constraints. The walls needed to be terribly thick at the bottom, and often supported by complicated systems of buttresses and flying buttresses, to stop them falling down.

In the nineteenth century, the Industrial Revolution resulted in the development of new techniques, notably the use of iron. This allowed the building of much bigger buildings, in particular railway stations, the "cathedrals of the Industrial Revolution", and exhibition buildings. Opened in 1889, the nineteenth century's most famous iron and steel structure reached unheard-of new heights. The Eiffel Tower, 1010 feet high, pointed the way to the future: upwards!

Yet plain iron and steel structures had their limitations. They were not really suitable for the design of human habitations or offices — and in the event of fire, they could collapse very rapidly.

It was in fact the combination of the old and the new that allowed the development of the skyscraper: the combination of metal frames and masonry cladding. The metal frame allowed much greater strength and height, without the enormous mass and weight of stone-built structures; the masonry cladding allowed traditional features, such as rooms and partitions, to be included in the design with relatively few problems. The man generally considered as the father of this new technique was the Chicago architect William Jenney.

Though Jenney was the father of the metal-frame building, his own buildings did not go any higher than contemporary brick or stone buildings already going up in Chicago, New York, and elsewhere. Jenney's "Home Insurance Building" in Chicago (photo above) was only ten stories high, and stylistically similar to other buildings which did not use a metal frame.

It was left to Jenney's successors, notably Lewis Sullivan and David Burnham, working in Chicago and New York, to go futher. Burnham's "Flat-iron Building" in New York, erected in 1902, reached new heights for an office building, with 20 stories; and at 290 feet (about 90 metres), it is known as New York's first skyscraper.

The reasons for building skyscrapers were clear, particularly in a city like New York, whose downtown district, Manhattan, could not expand very easily on a horizontal plane, limited as it was by the Hudson and East rivers. Apart from upwards, there were not many directions in which Manhattan could grow. And once the building techniques had been mastered, vertical expansion became the most desirable solution for the city's businessmen.

Since those early days, and in particular since the Second World War, skyscrapers have mushroomed in all the world's big cities; and they keep getting higher and higher. Before the First World War, New York's "Woolworth Building" had reached 792 feet (241 metres) ; and by the Second World War, the Empire State Building —for many years the world's tallest — had actually passed the Eiffel Tower. In the 1970s, the enormous twin towers of the World Trade Center, 107 stories high, went even further. But did they go too far?  As bold icons of modern America, they became the target of terrorism when radical Islamic terrorists used passenger jets to destroy them, in the terrible events of 9/11  - the 11th of September 2001.

Architectural dreamers of a hundred years ago or more imagined cities in the sky, giant buildings where people lived thousands of feet above the ground, above the clouds, above the pollution. Today, although some people believe that modern skyscrapers are too high, they now characterise cities all over the world; and they keep getting higher. Fires in a few tall buildings, for instance in Dubai,  have led to further questions being asked; but in spite of the occasional disaster, skyscrapers are here to stay — at least for offices and city hotels. Symbols of our civilisation, they are not likely to be replaced.

Interactive gap-fill exercises.  Use on screen or on paper

Use of articles
Complete the following extract from the article, putting in the definite articles if and when they are required.  If no article is needed, put  0.
To revise the use of articles,  visit the articles page  of the Linguapress online English grammar
To save your answers, take a screenshot when you have completed the exercise.

Yet  plain iron and steel structures had their limitations. They were not really suitable for  design of human habitations or  offices — and in  event of  fire, they could collapse very rapidly.

It was in fact  combination of  old and  new that allowed  development of skyscraper:  combination of  metal frames and  masonry cladding.  metal frame allowed  much greater strength and height, without  enormous mass and weight of stone-built structures;  masonry cladding allowed  traditional features, such as  rooms and partitions, to be included in  design with relatively few problems.  man generally considered as  father of this new technique was the Chicago architect William Jenney.