The story of Rosa Parks 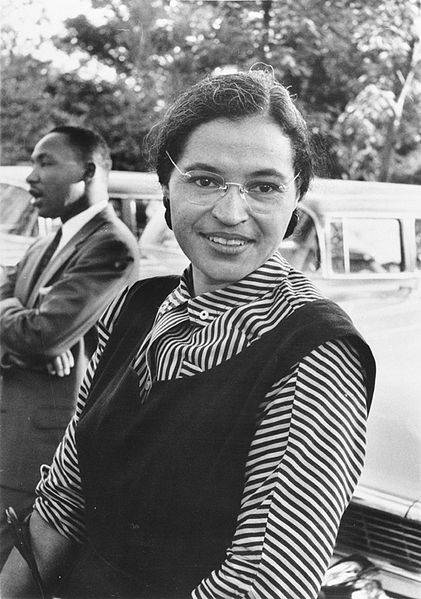 Rosa Parks, with Martin Luther King and a bus.


Society goes forward more thanks to people who refuse authority, than to those who respect it.    While some people might consider this idea as a recipe for anarchy, it is an idea that is highly respected in the culture of the English-speaking countries. It is rooted in a historic  tradition of tolerance, and expressed in attitudes to difference, to originality, even to eccentricity.

It does not mean that English speaking countries have always been tolerant: that is certainly not the case; but those who react against intolerance or just against senseless authority can easily become heroes.
Rosa Parks is a classic example.

As a young woman in the city of Montgomery, Alabama, in the Deep South of the United States, Rosa became a heroine and role model for millions because she defied authority.
Traveling home on a Montgomery bus one day in 1955, Rosa had the gall to sit down in one of the empty seats at the front, seats reserved for Whites only. When the driver noticed, he immediately stopped the bus, and ordered Rosa to go to the back of the bus. Rosa defied his authority. The driver repeated his order "Go to the back!" Again, and again Rosa defied him; in the end, the police were called, and Rosa Parks was hauled off the bus and arrested. She was fined $10 - a large sum in those days.
Yet Rosa's defiance of authority was to have repercussions throughout the USA; it was this act that ignited the whole Civil Rights movement in the United States of America, and gave hope to similar movements in other parts of the world.
As Rosa faced down authority on that city over half a century ago, little did she imagine that she would one day receive the highest honor of the State of Alabama, and that that honor would be bestowed on her personally by the Governor. Yet that is exactly what has happened. 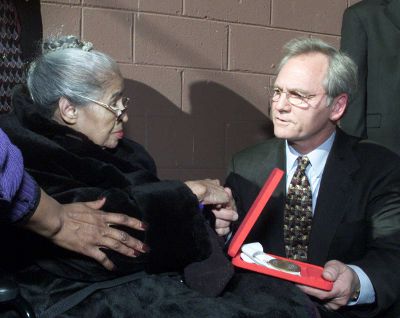 Rosa Parks receiving a medal from Gov. Siegelman in 2000

At the end  of the year 2000, Rosa Parks, then an elderly lady, became the first recipient of the "Governor's Medal of Honor for Extraordinary Courage", a new award designed to honor those who demonstrate extraordinary acts of courage that have a lasting impact on the lives of others.
At the presentation ceremony, Governor Siegelman said: "As governor, I am proud to bestow this highest honor on Rosa Parks, a woman who, in 1955, stared down injustice by sitting firmly to take a stand against the inequality of that day. Mrs. Parks' simple act of civil disobedience sparked a global revolution that began with the Montgomery Bus Boycott and forever changed our nation. Every American is indebted to this daughter of Alabama, who refused to bow to injustice and who personifies extraordinary heroism. May her profound courage and tenacious will for social justice infuse our hearts and forever inspire us all.
"I can think of no one who has demonstrated more individual courage or a willingness to stand up for what is right than Mrs. Parks, and I am proud to name her as the first recipient of this award."

Though Blacks and Whites had, in theory, been equal citizens in the USA since the days of emancipation, even in 1950 they did not benefit from equal rights. Segregation was particularly severe in the states of the Old South, those states that had fought a civil war in defense of slavery less than 100 years previously.
In Alabama, things were as bad as anywhere. In 1954, the U.S. Supreme court had ruled that "separate but equal" education policies were illegal, but little had been done in the southern states to change the situation. Yet Blacks - "Negroes" as they were called in those days - were becoming more determined to challenge White power.
The famous "Montgomery Bus Boycott", triggered by Rosa's act of defiance, lasted for almost a year. In defense of equal rights, Montgomery's whole black population - representing the majority of bus travelers - boycotted public transport, and by so doing demonstrated, in the heart of Alabama, that Blacks were a fundamental part of local society.
Without black passengers, the white-owned and run bus company got into serious financial difficulty, and had to reduce services, causing problems for the remaining white passengers and job losses for white employees.
In December 1956, the Supreme Court ruled that Alabama's segregation laws were unconstitutional; and another big fight in the struggle for Civil Rights had been won. A few days later, a young black minister, the Reverend Martin Luther King, sat just where Rosa had sat a year earlier in a Montgomery bus, and no one told him to move.
The long struggle for Civil Rights was not over, but a major battle had been won.
At last a book that makes English grammar clear and understandable

award: honor, prize - bestow on: give to - bow to: submit to  -  to boycott : refuse to use something -  defy (pronounced [di'fai])- resist - distrust : questioning, suspicion - emancipation: liberation, the end of slavery - - face down: resist - gall: impudence, boldness - hauled: pulled - infuse: move into - minister: churchman - run: managed - slavery : a slave is a person who is not free, but owned by another person -  spark: ignite, set light to - stare down: confront -- trigger: start - will: determination -

Copyright notice.
This resource is © copyright Linguapress 2001 - 2021.   Originally published in Spectrum magazine.
This text may not be reproduced on other websites nor in printed form without written permission from the publishers. Reproduction is authorised exclusively for personal use by students, or for use by teachers with their classes.

Select the best alternative for the following words or phrases that occur in the article, from those suggested:

Find the opposites of the following words, in the article:

Imagine the conversation that took place between the bus driver and Rosa, that day in 1955.

Tell the story from Rosa's point of view


This resource is © copyright Linguapress  2001-2021.
Originally published in Spectrum magazine.
Photo credits:
top: USIA - public domain.
below: Office of the Governor of Alabama.