► You are here:   Linguapress English  ›
Intermediate reading ›
Focus on Canada


Canada - the biggest country in the New World

WHAT IS THE  BIGGEST COUNTRY IN THE WORLD - in terms of surface area?  The USA?     NO !  CHINA ?  NO !  RUSSIA ? YES  !!  And the second biggest country in the world? Many people  are quite surprised to learn that it is actually Canada.

CANADA - IT'S NOT the USA 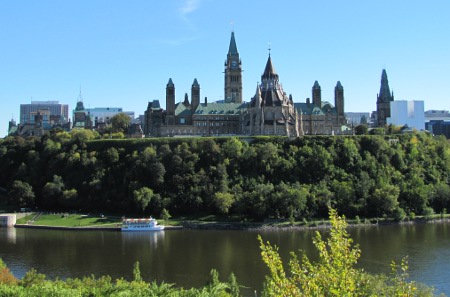 The Canadian Parliament building, in Ottawa ... seen from Gatineau
Imagine yourself sitting in a café one day in your home town, when on the next table you hear some people speaking English with a strong North American accent. Being a friendly person, you lean over and say, "Hi! Are you American?"
"No," comes the immediate answer. "Canadian!"
Calling a English-speaking Canadian an American can be as bad as telling a Scotsman that he's English or a Swiss person he's German. In spite of a common language, there are differences in culture and national feeling. "No," many Canadians will tell you with insistence, "We're not Americans! We're Canadians."

In the same way as Quebecers are determined to keep their identity, Canadians from the other provinces are determined to keep Canada's identity. Although the Canadian way of life is more and more like the American way of life, lots of details are different, and many Canadians, particularly Quebecers, are worried about the survival of their own differences.
Canadians use metres and kilometres and measure temperatures in Celsius; Americans use feet and miles, and measure temperature in Fahrenheit. The USA has states, Canada has provinces.
Yet about 80% of Canadians live within 150 km. of the U.S. border, and this has had a bad effect on the Canadian economy. Like most European countries, Canada has a national health service, and a good social security system; but good welfare services have to be paid for by high taxes, so the cost of living in Canada is high. Because of this, hundreds of thousands of Canadians often get in their cars and drive over to the USA to go shopping. This is one cause of economic problems in Canada. Over half of Canada's imports come from the United States, and Canada has a trade deficit with the USA.
But the American influence is not just a question of shopping. Lots of Canadians drive American cars, and cars are almost as important in Canada as they are in the USA. There is television too. While Quebecers tend to watch their own French-language TV stations, English-speaking Canadians have a choice between local English-speaking channels, national programmes from CBC, and dozens of American channels brought to them by cable or satellite. Unless they specifically want to watch local stations, they're just as likely to tune in to one of the big American channels as they are to a Canadian channel.
Perhaps it is not surprising if some Canadians are afraid that their country will soon be just like another part of the USA. If, one day, Quebec becomes independent, many Canadians fear that the rest of Canada could break up. Perhaps that's an exaggeration; many Canadians feel it is a real risk.

SOME SURPRISING FACTS ABOUT CANADA 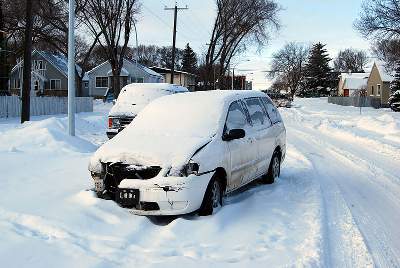 Winter life in Canada
If there is one thing that unites almost the whole population of Canada, it is the experience of winter.
While in most parts of Europe, people never know what the winter weather will be like from one week to the next, Canadians know what winter means. When the last leaves fall off the trees in Autumn, Canadians know that the winter is coming, and that it will be cold; or if it is not cold, it will be very cold! When the Arctic air blows south in the winter months, Canadians know that the temperature will fall to -20° or lower, perhaps down to -40°; but because they know that it is going to happen, Canadians are ready for it! That, as they say, is half the battle of survival!
In Edmonton, the biggest city in the province of Alberta, the first winter snows can come in October.  When this happens, Edmontonians complain that it is a bit early, but then just get on with normal life.
For most of the winter, which usually lasts from November to April, daytime temperatures in the city rarely rise above freezing; from time to time, Arctic winds howl down from the north, and for several days temperatures in the city may not rise above -20° (and may drop below -40°).
But in a city where people are used to cold winters, life carries on as usual. Canadians have to know how to cope with the cold; those who can't have just two options, to emigrate or to go and live beyond the Rocky Mountains, beside the Pacific Ocean, in "B.C."  – British Columbia!
The easiest way to keep away from the cold of a Canadian winter is to stay indoors as much as possible! This does not mean that you have to stay at home, however! Many people keep their cars in heated basement garages which they can reach without going outside. Cars are often kept warm in winter, with electric heaters which are plugged into power points.
Some shopping centres have underground or indoor parking lots: and in the city centre, it is often possible to walk from one building to another, underground or above ground, without ever having to go out in the cold. The biggest shopping centre in town has hundreds of shops, cinemas, an ice rink, a sports centre and an amusement park all under one roof! The "West Edmonton Mall" is like an indoor city — and in the heart of winter, it is a good place to go shopping.
Outside, people make the most of the snow, for leisure and recreation. Skiing, skating and snow-shoeing are popular activities that can be practised in the city's parks; many parks also have areas which are flooded in winter, to provide natural icerinks, which are lit up in the evenings. Everyone tries to enjoy the snow as much as possible!
Perhaps this is easier than it is in most parts of Europe; Canadian snow tends to be dry and powdery. For most of the winter, for example, you can't make it into snowballs, it's too cold. There is no point in putting salt on the roads, either, as at -10° and below, the snow just will not melt, even with salt! The only way to clear the roads is to use snow-ploughs or snow-blowers.

Canada's official Head of State is Queen Elizabeth, who is also the nominal head of state of 15 other Commonwealth countries. Her function is purely symbolic. Many Canadians would like Canada to have a Canadian head of State; but many others want to keep the monarchy. Opinion is divided, but there is no great opposition to the Queen as head of state, except in Quebec.
It was not until 1982 that Canada became constitutionally an independent nation! When this happened, many Canadians were quite surprised, as they thought that their country had been independent since 1867. In practice they were right; the Canadian government in Ottawa has governed Canada since that date.
The links between Britain and Canada remain very strong, all the same. About 40% of Canadians have ancestors from the British Isles, and about 30% have ancestors from France. In particular, lots of Scottish people emigrated from Britain to Canada in the 19th and 20th centuries, and the British Isles remained the main source of immigration to Canada until the 1980's.
Today, most new Canadian immigrants come from Asia, particularly from southern and south east Asia. 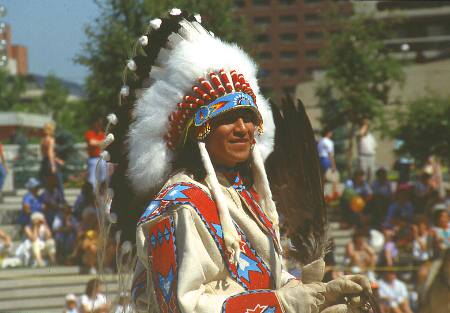 Celebrating Canada's Indian heritage in the centre of Calgary, Alberta.
Before Europeans came to North America, Canada was inhabited by native Americans, known today as First Nations, Indians,  Inuit or sometmes as Eskimos.
In the Americas, the word "Indians" does not mean people from India!  It means "indigenous people", people who already live in a place, or were born there.
Contrary to popular imagination, Canada's First Nations were not all nomadic people, and in eastern Canada, many Indians lived in villages made of wooden huts. Like Europeans, they grew crops and cultivated small fields.
Different groups of Indians often fought for territory, for good agricultural land, for the rivers with most fish in them. However, there was plenty of room for everyone in such a vast country, and food was not a real problem; the forests were full of wild animals.
The First Nations living in the western half of Canada were more nomadic. The great prairies of Western Canada were  home to tribes  who lived in teepees; these nomads lived mainly from hunting.
Today, there are about 300,000 officially registered Indians in Canada, and about a million other Canadians who are partly of First Nation origin. Indian ceremonies and festivities are an important part of Canadian culture.
Across Canada, there are over 2000 Indian reservations, many of them relatively poor. However some Indian reservations have rich natural resources. In Alberta, First Nation communities receive hundreds of millions of dollars each year in royalties for gas and oil extracted from the ground in or under their reservations.

WORD GUIDE
ancestors: grandparents, great grandparents, etc. - basement: the underground level of a building - border: frontier - cope with: live with, accept - crops: food plants - flooded: covered with water - health: medical condition - howl: blow very fast - hunting: killing wild animals - icerink: place for skating - parking lot: car park - plugged into: connected to - power points: sources of electric current - - tend to: have a habit of (-ing) - trade deficit:  a trade deficit is when a country imports more than it exports - tune in to: select - used to: accustomed to, familiar with - welfare: services to help people who are in a difficult situation


Printing: Optimized for A4 printing from the Firefox browser
Copyright © Linguapress.  Do not copy this document to any other website
Copying permitted for personal study, or by teachers for use with their students


most the winter, which usually lasts November April, daytime temperatures the city rarely rise ____ freezing; time time, Arctic winds howl the north, and several days temperatures the city may not rise -20° (and may drop -40°).          the cold; those who can't have just two options, emigrate or go and live the Rocky Mountains, the Pacific Ocean, B.C., British Columbia!
But a city where people are used cold winters, life carries as usual. Canadians have know how cope.
The easiest way keep the cold a Canadian winter is stay as much as possible! This does not mean that you have stay _ home, however! Many people keep their cars heated basement garages which they can reach going outside. Cars are often kept warm winter, electric heaters which are plugged power points.

OR after going through this document in class, have students do this exercise in written form, adding at least EIGHT words to complete each sentence.

Creative writing (reusing information in a different context): students should imagine that they are on holiday in Canada at this moment, and write a letter to a friend at home, describing life. They should use the following words:
snow, cold, warm, underground, snow-shoeing, salt, the United States,

Language and grammar Note the use of the present participle in the  first three paragraphs of this document.


Recommended for teachers and advanced students


Copyright notice.
This resource is © copyright Linguapress 2000-2017
Updated 2015 from an article originally published in Freeway magazine.
Photo top of page by Monam.