John Lennon - much more than just a Beatle

John Lennon was assassinated in New York in December 1980 - just three months after the launch of Linguapress's Spectrum magazine. This retrospective, one of the oldest items in the Linguapress online archive, appeared in January 1981.
The circumstances of the murder of John Lennon are well enough known for it to be unnecessary to repeat them now. It was ironic that John Lennon, advocate of non-violence, should have died the way he did : though perhaps it was ironic too that John should have chosen to live in New York, one of the more violent cities in the USA. 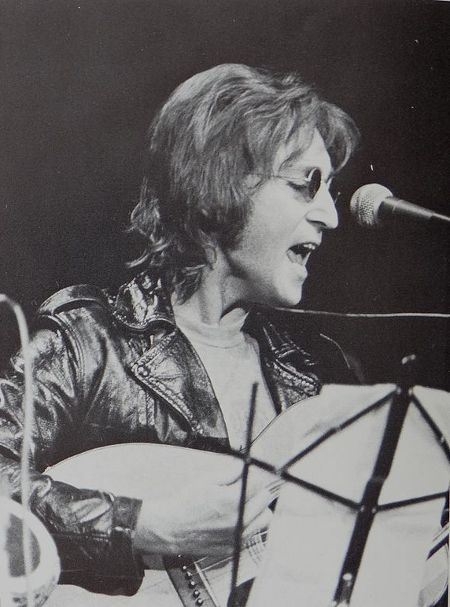 "lt could only have happened in New York," said one stunned fan, shortly after the news broke; that may or may not be true. That it did happen in New York certainly was. "lt's a part of our youth that has died," said someone else ; and tributes to John Lennon came in from people all over the world – from politicians, from musicians, from writers, from Englishmen, from Frenchmen, from Japanese people. There is probably no country in the world in which John's death did not come as a shock to some people. US president Ronald Reagan described it as "a great tragedy", and music radio-stations across the world played Lennon's songs, some of them in a non-stop tribute to the former Beatle who had such a tremendous effect on the world of the nineteen-sixties and early seventies.

John Lennon never set out to become a hero, nor the leader of a whole generation. It came on him more by accident. He didn't want to be thought of as the leader of the Beatles — people forced it on him. "We're a co-operative" he used to say : but in the early nineteen sixties that was something people couldn't accept. "You must have a leader," they answered, and so John became the chief Beatle. He deserved the position, indeed, since he was the founder of the group, he wrote the words of most of their songs, and he was the dynamic force behind the others. "I'm just a 'uman bein' " he used to say.
What was it therefore which made the Beatles what they were ? In short it was a combination of various things; their music, the words of their songs, their attitude, and their appearance.
Right from the start they were different; their music was good, and original; the words of their songs (Lennon's words) were often different. At the start Lennon wrote about love and romance, but it wasn't Hollywood love, it was 1960's everyday romance : something with which millions of young people in the cities of Britain and America, later Europe too, could identify. And in the nineteen sixties, there were millions and millions of teenagers and twenties just searching for something new to identify with. The expression "generation gap" was just becoming popular. The Beatles, led by Lennon, became the leaders of a new generation.
Forced into the role of leader, John Lennon accepted it, modestly. Even in 1970, he was still saying "l'm just a ’uman bein' " : but by then he knew he was a human being with influence; he knew that what he said or sung would be repeated all over the world. His songs had usually said something, right from the start; but in the period 1969-70, he began to say things more consciously. He had always been a symbol of an alternative life-style; but in the late 60s, his message became more overt. He wrote "Revolution", a song which classed him as peaceful, not violent, revolutionary, then there was his famous "Give Peace a Chance", and the more socially-conscious "Working-class Hero".
In fact, Lennon left the Beatles and the Beatles split up because they had "nothing more to say", whereas he had a lot. The Lennon of the early seventies was the most influential. He was "John Lennon", not just "a Beatle".

Shortly after the end of the Vietnam war, Lennon retired from public life. In a sense, the Beatles’ generation had managed, by then, to change the face of western society. Attitudes had become much more liberal, and pop music part of our culture.
Shortly before his death, John Lennon recorded another album; and the day he died, he had been in the recording studio. After five years of family life, he was returning to public life. Was it a need for more money ? Certainly not. Lennon was returning to life, perhaps, because he could see the world returning to its old ways. Re-armament, a return to conservatism, international tension, talk of war. The ex-leader of a generation which had tried to give peace a chance, could not sit back and watch things change for the worse. Tragically, in the end, peace would not give him a chance.


The new grammar for the 2020s
Concise, detailed, clear

Copyright notice.
This resource is © copyright Linguapress 1981 renewed 2020.   Originally published in Spectrum magazine.
This text may not be reproduced on other websites nor in printed form without written permission from the publishers. Reproduction is authorised exclusively for personal use by students, or for use by teachers with their classes.

Interactive exercise : complete on screen or on paper.
Replace the missing modal verbs or auxiliaries in these extracts from the article

Perhaps it was ironic too that John    chosen to live in New York
lt  only have happened in New York,
That  or  not be true.
"We're a co-operative" he  say."
In the early nineteen sixties that was something people  accept.
"You  have a leader," they answered,
He knew that what he said or sung   repeated all over the world.
The Beatles’ generation  managed, by then, to change the face of western society.
Tragically, in the end, peace  not give him a chance.

Grammar:
For a clear presentation of the use of modal verbs in English, see A Descriptive Grammar of English: Modern English grammar by example - pages 58 - 66
More details   ISBN 979 - 8645611750.  Ebook and paperback versions from Amazon.