► You are here:   Linguapress.com  English  ›
Advanced reading   › Tolkien  and the Hobbit

JRR TOLKIEN - creator of the Hobbit 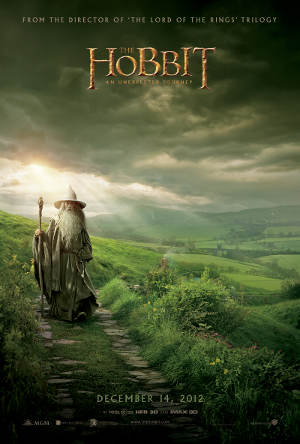 "Middle Earth" is a world to itself, a magical mythical place like no other. It is one of the most famous places in twentieth century fiction, and the wonderful fruit of a brilliant imagination. The Lord of the Rings, the trilogy set in this mysterious world, has become one of the great classics of twentieth century literature. It has been translated into dozens of languages and imitated by dozens of writers, storytellers and film makers; yet no-one has surpassed the genius of the original. J.R.R.Tolkien, the author of Lord of the Rings, was the improbable creator of this great work of fantasy.

It was while he was marking exams in the early 1930's that J.R.R.Tolkien, Professor of Mediaeval English Literature at Oxford University, wrote down a strange sentence that started: "In a hole in the ground, there lived a hobbit..."
Obviously, creative writing was more interesting than marking papers, for Tolkien went on to transform his sentence into a full novel, called "The Hobbit", published in 1937.
Quite unlike any other book in contemporary English literature, the Hobbit was an extended fairy tale, an allegory set in a mythical world peopled with strange creatures and animals. It was not the sort of book that ought to have become a best seller in the late 1930's, but it did  – so much so that the publisher requested a sequel. Delayed by the horror of war, the first volume of Lord of the Rings eventually reached the bookshops in 1954.
Since then, Tolkien has come to be seen as one of the most important figures in English literature this century, an original genius who created his own style of literature and his own universe. So who was this unusual figure, born in the late nineteenth century in rural South Africa? 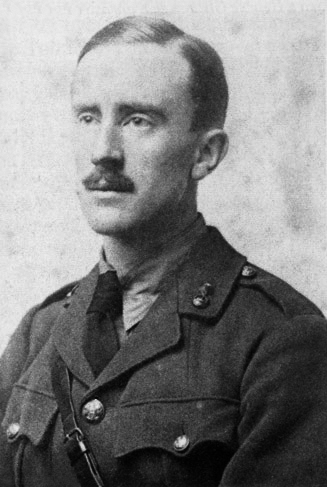 John Ronald Reuel Tolkien first came to England at the age of 4, when his mother determined that it would be better for him to be brought up in a milder climate. His father, a banker, should have followed his family back to England, but shortly after their departure Arthur Tolkien caught rheumatic fever and died; Ronald and his brother were thus brought up by their mother from age four onwards.
Tragedy was to mark Ronald's childhood again; when he was 10, his mother died of diabetes, leaving him and his brother to be brought up in the care of a family friend, Father Francis Morgan, a Catholic priest.

With no parents, and no family except his brother, Ronald was left much to himself; a dreamer, he loved reading and could happily lose himself in the imaginary worlds he passed through in the pages of novels. Yet as a pupil at King Edward's School in Birmingham, he proved to be a brilliant linguist, and soon mastered French and German, Latin and Greek, plus Anglo Saxon, Old Norse, Icelandic and Finnish. His interest in Scandinavian languages also led him into a world of sagas and mythology.
At the age of sixteen, Ronald fell in love with a pretty girl, Edith Bratt, three years his senior, who was another orphan living in the same lodging house in Birmingham. In the strict climate of Edwardian Britain, teenage romances were frowned on, and although Ronald and Edith did their best to keep things a secret, it was not very long before someone spilled the beans. Furious, Father Francis removed Ronald to new lodgings, while Edith's guardians sent her  to live with relatives in the genteel town of Cheltenham.
Heartbroken, Ronald swore eternal love to Edith, even though he could not see her again; and with no other girls to worry about, he escaped from his sadness into hard work at school, eventually winning a scholarship to Oxford to study philology.
The question of whether art imitates reality, or vice versa, is one which is often discussed; but in Tolkien's case, the answer seems to be quite clear! Raised on a diet of novels, sagas and imaginary fiction, Ronald Tolkien did the kind of thing "that only happens in books"; when midnight struck on the day of his 21st birthday, he wrote to Edith announcing his intention of marrying her at once!
Edith, however, had in the mean time got engaged to a young man in Cheltenham, and wrote back to Ronald with this unexpected news! On receipt of her letter, Ronald hurried down to Cheltenham and began courting Edith again; the other young man was soon forgotten!
Then the war began. During the next year and a half, Ronald completed his degree in English (having changed courses), getting married to Edith before being sent off to fight in the trenches. Two months later, he was on the Somme, where he saw many of his great friends killed.
By good fortune, Ronald came out of the war physically unscathed; but psychologically, he had been through a deeply marking  experience. The war had strengthened his love of the calm of the countryside, and hatred of industry and the evil of inhumanity and war. These themes were to come up repeatedly through the idealism expressed in his fiction, from the Hobbit to the Lord of the Rings and beyond.
Tolkien died in September 1973.

trilogy -  set of three books - in the care of: by - his senior: older than him - frowned on: disapproved of -  swore: promised - scholarship: financial help, bursary - diet: menu - degree: university diploma - unscathed: undamaged.

Interactive  exercise :
Read through the article, then complete these sentences using the relevant information.

Shortly after his father died
A second tragedy occurred six years later diabetes
The two children to be brought up in the care of a family friend.
Edith Bratt, with whom than he was.
The two young lovers could not for very long.
Ronald consoled himself  to Oxford.
As soon as he that he wanted to marry her.
She wrote back Cheltenham.
Ronald and Edith got married trenches.
Although he a deeply marking experience.

If you have not read the Hobbit or Lord of the Rings yourself, there will probably be someone in your class who has, or who has seen the film of one or both. Get some-one to describe the book to the rest of the class, preferably in English.

Narrative style. This potted biography of Tolkien is a clear example of a chronological narrative. Expressions of time are important elements in the general cohesion of the text. Have students pick out all the words/expressions relating to time, starting from paragraph 4.

Teacher: make sure there is no collaboration between students. Then select two students, place them in opposite corners of the room, as "Ronald and Edith". Give all the letters by male students to "Edith", and those by female students to "Ronald", and have them read out (anonymously) letters and replies.  Amusement and success guaranteed! Students will listen attentively and enjoy their class  and that means they will learn!