► You are here:   English reading resources  ›
Intermediate English  › Scouting in the 21st Century

The Scout Movement - also known as the Boy Scouts - is now a huge international organization; in more than 100 years, it has changed massively - though many people do not realise this. .

For many people in Britain, the word “scouting” evokes images of boys in short trousers and girls in blue uniforms. Many people imagine that the Scout Association and its female counterpart the Guides Association are old-fashioned organisations from another age - associations for people who are more interested in the past than the future, people who just like camping in the rain and washing in cold water.
It’s quite easy to understand why Scouts and Guides have this sort of image. The “Boy Scouts” were founded over 100 years ago by Robert Baden-Powell, a retired English army general; the “Girl Guides” followed three years later. The organisations are  thus very well established! 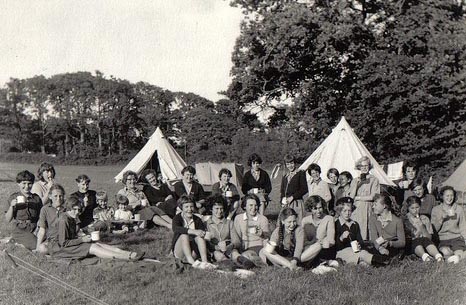 Baden-Powell’s original Scouts were organised in an almost military manner. Young people had to learn discipline and learn to do things as a group; they went on camping expeditions in difficult conditions, had to learn to make campfires and, yes, they certainly had to get used to washing in cold water. In those days though, that was not particularly unusual, as many people washed in cold water.
Nevertheless, even at the start, there was much more to scouting than that. Scouts and Guides also learned the value of solidarity; right from the start, they had to learn how to cope with difficult situations, how to interact with other people, and how to play a useful part in society. Baden-Powell’s organisations were inclusive, and never exclusive; any young person could become a Scout or a Guide, regardless of race, background or religion.   Though the Scout and Guide movements began in England, they soon spread to other countries, and within 50 years, scouting had become a popular activity with young people all over the world. In Britain, almost every young person between the ages of seven and twenty could belong to a local troop; troops were - and still are - attached to schools and communities, churches and youth centres.
In more recent years, scouting has continued to develop worldwide, to the point that there are now more scouts than ever before.... over 40 million of them in more than 200 different countries!
In Britain today, the Scouts and Guides and their junior versions - the Cubs and the Brownies - are together the largest youth organisation in the country, with more than 1.3 million members; and although some people still think of them as rather old-fashioned, the Scouts and Guides have always moved with the times, adapting to changes in modern society. 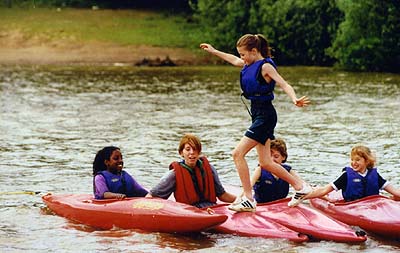 While today’s Scouts and Guides still learn how to go camping in the rain and make camp fires, they also take part in a wide variety of exciting adventure activities, including kayaking and horse riding, mountain-biking, rock-climbing, pot-holing and a lot more.
This, however, is just one aspect of modern Scouting; during their weekly or twice-weekly sessions, Scouts and Guides also still learn about participation, independence and tolerance; they may also learn useful practical skills, such as first aid, or how to use a computer. In most Scout and Guide troops, they also learn about environmental issues, drugs, and coping with the pressures of modern teenage life.
Many Scout and Guide troops also take part in international aid programmes such as Book Aid, collecting useful books that can be sent to poor schools in developing countries. Others have their own special aid projects, for which they raise money in many different ways.
At times, some people have said that the Guides and the Scouts should join together - that in today’s world there should no longer be two organisations, one for boys and the other for girls. In 1999, when the Guide Association organised the third World Guide Camp in England - for over 3000 participants - journalists often asked Guides whether they would not have preferred to be on a camp with boys too. To the surprise of many reporters, the answers were always “No”; for most of the Guides interviewed, Guide Camp, without boys, was a welcome change from co-educational classes at school.
“Boys, no way! We wouldn’t want them here. They’d spoil it!”
Even so, things have changed here too. Girls can now join the Scouts too if they want to, and many have done so. The old name “Boy Scouts” has been abandoned for good.

WORDS:
background: origin - coeducational classes: classes with both boys and girls - cope with: react to, not be troubled by - evoke: create - found: start - get used to: be familiar with - inclusive: open to everyone - pot-holing: exploring caverns underground - regardless of: with no consideration of - skills: competences, abilities -  thus: therefore - worldwide: all over the world -

Copyright © Linguapress.  Do not copy this document to any other website . Copying permitted for personal study, or by teachers for use with their students.

Reusing information: Write factual sentences, based on information from this article, beginning:

Do you pronounce English words correctly? Decide which of the following words, in the first two paragraphs, contained the vowel sound [ei], as in the words plate or great

(Teachers: read the first two paragraphs of the text out loud to your students, for best application of this exercise. Note that the name Baden rhymes with maiden, in British English.)

Copyright information.
Free to view, free to use, free to print, but not free to copy to other websites.