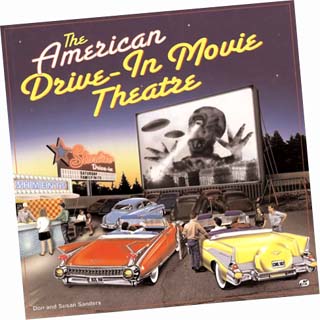 They were a cultural icon, a classic product of twentieth century lifestyle; movie theaters where you just drove up, paid a few bucks, parked facing the screen, relaxed in your car, and waited for the movie to begin.

In the mid fifties, when drive-in theaters were at their most popular, there were over 5000 of them spread all across the USA. It was the age of the American Dream, of James Dean and the young Elvis Presley, a time before anyone had heard of Vietnam, smog, inner cities or color TV.

The "automobile" was king, a symbol of the new-found freedoms of the great American middle class. The American dream was to live in a nice house in a friendly suburb, with a large comfortable automobile or two parked in the driveway; and the automobile was there to be used.

Drive-in movie theaters originated in the eastern USA in the 1930's; in those days the quality of movies was not terribly polished, so people tended not to worry about poor quality sound and images that flickered on the vast outdoor screens in front of them. Often, it wasn't much better in indoor movie theaters. Moreover the drive-ins had advantages that indoor theaters did not have; you didn't get disturbed by the person next to you, and you could go as you pleased. In those days, people dressed up to go to the movies in town; there was no dressing up for drive-ins.

From the end of the Second World War, until the mid sixties, drive-ins lived their glory years. They got bigger and smarter, and the sound quality improved markedly. In the early years, the sound had come from huge loudspeakers placed below the screen; by the fifties, the system of individual sound for each car had become the norm, and all you had to do was to roll down the window and hook the small loudspeaker over it. If there were too many mosquitos, you could even pull the speaker right into the car, and roll the window up again.
Movie theaters were changing; but so was American society. By 1965, the American Dream was beginning to show some cracks. Once color television arrived, the writing was on the wall for thousands of U.S. movie-theaters, both drive-ins and indoor cinemas. With an escalating crime rate and rising fears of violence, more and more Americans decided that it was better not to go out in the evening at all.

; Drive-in movie theaters were also suffering from commercial pressures; some went out of business, unable to compete with the flexibility and comfort of new suburban multiplex cinemas - but many profitable theaters closed too. As towns and cities expanded, large suburban sites became valuable real estate, and few owners could resist multi-million dollar offers to sell out to supermarket chains or business corporations. Over 1,000 drive-ins closed during the 1970's; over 2,000 followed in the next decade; by the time 1990 arrived, there were less than 1,000 drive-in screens across the USA, and few people thought that there would be any left at all by the end of the century.

Yet things have not happened that way. Today, in 2009, there are still almost 500 drive-in theaters in the USA; only about 100 screens  disappeared in the 1990's, and new screens are now appearing, particularly in states where suburban real estate values have not escalated too far. Ohio, for instance, still has almost over 30 drive-in theaters!

Today's theater owners have learned to market their assets more effectively; instead of remaining empty during the day time, theater parking lots are now used for flea markets, open air sales, and other activities.

Technology has come to the drive-in too; the modern drive-in uses a low-frequency FM radio sound system, and viewers simply tune their car radio to the right channel, and listen to the soundtrack using their own hi-fi system. Given the quality of the sound systems in some cars these days, there is a new breed of drive-in theater fans who come along to enjoy their own in-car sound systems. Watching the recent movie Twister with the advantage of a quadriphonic megawatt in-car hi-fi was, it is said, quite an experience - especially on a windy night with lightening flashing in the distance!

Many movie-goers, however, come along just for the fun, or the nostalgia, of watching a movie in a different sort of environment, under a star-lit sky, and in the comfort of their car! They can smoke if they want to, drink coffee, or order a pizza or a burger; food and drink are available in today's drive-ins, providing another plus that indoor theaters cannot offer... and that too is helping drive-ins to survive.

It is still possible to visit a drive-in movie theater in the USA, but how long will they last? Watching a move from the back of a 1962 Cadillac convertible was one thing; doing so from the back of a Honda Civic is not the same experience !


Printing: Optimized for the Firefox browser
Copyright © Linguapress.  Do not copy this document to any other website
Copying permitted for personal study, or by teachers for use with their students


Read the article and decide if these statements are true or false: justify your answer by quoting from the text.