Each year, one Saturday in September, crowds of people line the Thames through London, to watch one of the city's most unusual events; the "Great River Race". 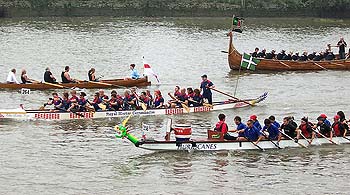 Many big cities have one annual "marathon" race; London has two - one on dry land, the other on water.

Technically, the Great River Race is not a marathon; it is slightly too short, and it is a boat race. Starting at Richmond, in the western suburbs of London, participants have to row their boats 22 miles, as far as the London docks, in the east.

The race is a relatively new event in the London calendar. The first race took place in 1988.

The idea was born in 1987, when members of the historic "Company of Watermen and Lightermen" (a very old professional organisation) rowed a replica 16th century royal barge from Hampton Court to the Tower of London.

In 1988, they challenged other "traditional boats" to a race. Boats that want to take part must all be of traditional design, with at least four oars or paddles; furthermore, each boat has to carry at least one passenger.
Over the years, the race has become a very colourful event, with the participation of a wonderful variety of boats. While most are ordinary rowing boats, there are also Viking longships, and other unusual boats. In 1995, for instance, the race was won by a Chinese dragonboat, in a record time of 2 hours, 6 minutes and 31 seconds!

As the years go by, the number of participants keeps increasing; from 72 boats in 1988, the number of entries reached 295 in 1997, and will probably be even higher this year. Last year, there were teams from all over the U.K, and also from America, Canada, and five European countries.

In order to provide a thrilling finish to the race, a "handicap" system operates. At the start of the race, the slowest boats set off first, the fastest ones last.

In many ways, the Great River Race is a true race, in the traditional sense of the term - a race for amateurs, and a race without corporate sponsors.

WORD GUIDE
event: occurrence, occasion  -  suburbs: the outside parts of a city  -  lighterman: boatmen  -  row: in the picture, men are rowing boats -  replica ; reproduction, copy -  oars and paddles: your row a boat with oars or paddles   -  -  for instance : for example -  set off: begin, depart.


Return to Linguapress site index
Printing: Optimized for A4 printing with the Firefox or Chrome browsers
Copyright © Linguapress.  Do not copy this document to any other website

Here is a postcard written by a young man called Joe. Last year, Joe took part in the “Great River Race”, and in this postcard he tells his friend about the experience. Complete the postcard, using information from the article, and putting all verbs in the right tense.


Originally published in Freeway, the intermediate level English newsmagazine.
Republication on other websites or in print is not authorised


Copyright notice.
All articles published on this website remain the copyright © of Linguapress.com and/or their individual authors.
Reproduction is authorised exclusively for use by students for personal use, or for teachers for use in class.
Copyright 2000 - 2016
Multi-copying of this resource is permitted for classroom use. In schools declaring the source of copied materials to a national copyright agency, Linguapress intermediate level resources should be attributed to "Freeway" as the source and "Linguapresss France" as the publisher.
Multicopiage en France: en cas de déclaration CFEDC par l'établissement, document à attribuer à "Horizon", éditeur "Linguapress"..