A glossary of keywords for explaining grammar

English grammar and linguistics have been the subject of much research over the past fifty years; but as some of those most deeply involved in this research admit, the results have been underwhelming where the teaching of English grammar is concerned.
One of the many difficulties faced by teachers is the inconsistency in terminology, as Bas Aarts, professor at UCL and author of many books on English grammar, has pointed out.
This glossary has been drawn up in the belief that much of the confusion is due not so much to inconsistencies, but to poor and cumbersome explanations of English grammar terms, even from the experts, and to a proliferation in grammar resources of technical jargon that does little to make things clearer, and lots to make them seem more complicated.

Here therefore is a list of just thirty keywords – each once explained as simply and briefly as possible, and illustrated with a relevant example. These short definitions will allow teachers to explain most of the fundamentals of English grammar in a language that others can understand.
These descriptions are deliberately brief, so that they are easier to explain and remember.
Clearly this page does not provide a complete glossary of grammar; nor does it go into all the details and exceptions relating to each headword. That is not its aim, since that would require much longer and therefore less memorable explanations.
For those who want more detail, more examples, but not jargon, all of the terms and points listed below, as well as other terms mentioned but not included in the 30 keyword list, are clearly explained in A Descriptive Grammar of English (paperback, hardback or ebook)

Group 1 – Six units of meaning, from the smallest to the biggest.


Morpheme - a morpheme is the smallest unit of meaning in language. A word may be made up of a single morpheme, for example  child /  speak  /  good /  please / grammar  or a combination of morphemes, for example speaker / goodness / pleased. (A morpheme is not the same as a syllable... though most morphemes are single syllables.)

Word - a word is the smallest complete free-standing unit of meaning in a language.

Phrase - A phrase is a group of words which form a single unit of meaning, but is not a clause.
The man in the red shirt  is a phrase, but so is the red shirt on its own.

Clause - A clause is a group of words that has intrinsic meaning, since it contains a subject and a verb.

Sentence - A sentence is the basic unit that constitutes a declarative or interrogative statement.
Almost all sentences have at least two words, including a subject and a verb.

Paragraph - Paragraphs are the principal sub-divisions of documents.

Active: – Example The students were studying English.
The active "voice" is the main voice in which verbs are used. The other voice is the passive.
In the active voice, the subject is the doer or the topic of the action expressed by means of the verb.

Adjective – Examples: Good / bad / ugly / disreputable.
An adjective is a word that describes or modifies a noun, or occasionally a pronoun.
Key words used in relation to adjectives: attributive, predicative, comparative, superlative.

Adverb - Examples: Well / badly / sometimes / quite / on the table .
An adverb is a word or a prepositional phrase that describes of modifies a verb, an adjective, another adverb, or occasionally a whole sentence.

Article - Examples: A / an / the
An article is a type of determiner which comes before a noun. In English there are two sorts of articles, the definite article the, and  the indefinite articles a and an.  Some grammar sources also consider the word some as an indefinite article.

Auxiliary – Examples: am / is / was / has/ have / must / can / ought to
Auxiliaries are "helper" verbs which are used to form tenses or modify the meaning of a verb with regard to time, possibility, suitability or obligation.
Key words used in relation to auxiliaries: modal.

Conjunction – Examples: and / but / or / yet / though
A conjunction is a connector or connecting word, a word that is used to link sentences, clauses, phrases or words.

Determiner: Examples: the / a/ some / my / his / this / whose / Mary's / ten
Determiners are used at the start of a noun phrase. They include articles, demonstratives, numerals, quantifiers, or possessive determiners.  All nouns or noun phrases require a determiner unless they are used as generalisations.

Endings :  Examples: -ing / -ed / -ly / -ness / -ity / - ual
Also called suffixes, endings are grammatical or functional morphemes that are added to the end of word to inflect or change its meaning. Compared to many languages, English has relatively few endings.

Intensifier : Examples:   very /  extremely  /  most  / highly
A type of adverb that is used to give extra force to the meaning of an adjective or another adverb.

Modal verb: Examples: must / will / ought to / should /
These are helper verbs, or auxiliaries, such as can or must that are most commonly coupled to another verb in order to express possibility, obligation, probability or futurity.

Noun – Examples:  Man / woman /  chair / basket /  birth / oxygen / philosophy / Christopher / idea
A noun is a word that describes an entity (person, item, substance etc.) or a process. It is usually preceded by a determiner (article or other determiner) and may be qualified or modified by one or more adjectives, by prepositional phrases, or by another noun.
Key words used in relation to nouns: countable, uncountable, concrete, abstract, collective.

Passive –  Example:   The tree was blown over by the wind.
The passive is a "voice". A passive sentence is one in which the subject is the topic of the action (in this example tree), not the actor or agent (in this example wind).  Verbs are either used in the passive or in the active voice.

Predicate –  Example:   (We) had chicken and chips for lunch at school today.
Everything in a sentence that is not the subject. The predicate includes the verb, or verbs, plus any other elements that may be present, notably objects or adverb phrases.

Preposition – Examples:  in / on / under / against / after / with / by
A preposition is a short functional word that relates two other words in terms of space, time, manner or other relation, or modifies or specifies the meaning of a verb  (like to come in).

Pronoun -  Examples:  I / me / mine / you / she / we / this / who
A pronoun is a (usually) short word that is used to refer back to an already-mentioned (or implied) noun, or to a statement, without repeating it.
Key words used in relation to pronouns: personal, relative, interrogative, demonstrative, possessive.

Relative – Example:  People who live in glass houses shouldn't throw stones.
A relative clause is a subordinate clause introduced by a relative pronoun such as who, which, whose etc.

Subject – The subject is the main actor or the main topic of a sentence or clause. In a basic declarative sentence, the subject comes before the verb. In some questions, it follows the verb.

Subordinate clause – Examples …, that I told you. / If you drink that, ….
A subordinate or dependent clause is the secondary clause in a complex sentence. It does not have any logical meaning unless it is attached to a main clause, so cannot be used on its own. Types of subordinate clause include relative clauses, conditional clauses, time clauses etc.

Tense – Examples:  present / future / past / present perfect /
The word tense means different things to different people. In it wider meaning, best used in a teaching context, it describes the different forms in which a verb is used to represent different time contexts. In the narrow meaning, it is used to distinguish inflected and non-inflected forms of a verb, with reference to time.
Key words used in relation to tense: simple, progressive, continuous, aspect.

Verb -  Examples:  go / become /  sit down / move /  be / eat / know.
A verb is a word that describes an action, a process, or a state of being. Verbs which describe actions or changes of state are called dynamic verbs: those which describe a condition or state of being are called stative verbs.
Key words used in relation to verbs: active / passive / indicative / interrogative / tense / transitive / intransitive. 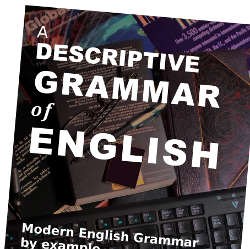 Recommended by IATEFL Voices magazine, ELT Magazine and others...

Discover this new compact reference grammar, a clear and simple guide to the essential rules of English Grammar  for teachers and intermediate+ students. Giving priority to examples and simple rules, Andrew Rossiter's  A Descriptive Grammar of English (2020) has been enthusiastically welcomed as a teaching aid by leading ELT publications, including EFL Magazine ("a useful reference book") and IATEFL's Voices magazine ("a welcome treat"), and is available worldwide from Amazon in book and ebook form. It's also available in its hardback edition from leading bookstores in many countries. For more details see Descriptive Grammar.

Grammar teaching has been very much in the spotlight in recent years. The team of linguists at the Survey of English Usage, founded by Randolph Quirk in 1959 and today led by Bas Aarts at UCL in London, has been grappling with the issue of grammar teaching for over twenty years, but apparently with only limited results.
Part of the difficulty may well be down to linguists' inherent concern with terminology, morphology and syntax – a lot of which is not very relevant for teachers, not to mention students.
Reflecting on the issue, Aarts detected a number of problems, most significantly with errors and terminology.  "First of all, many grammar resources are unreliable because they were written by non-experts. Even highly respected educational providers have published materials with serious errors, which can lead to confusion and poor pupil test performance. " (Aarts 2019). Aarts also pointed out that different writers use different terminology, which obviously does not help the situation.

Looking from the perspective of the teacher, rather than the linguist, one may speculate that the problems faced both by teachers and students, are in part due to proliferation of detail resulting the forensic research into the workings of language and languages that has taken place over the past half century. The light thrown on language by linguists, sociolinguists, semiologists and even orthophonists and others, has produced so much information  – at times contradictory – that for many teachers and students grammar appears more like a jungle than a roadmap..
Where does one start? How does one begin to present grammar in a way that  teachers (few of whom are linguistics graduates) can begin to understand?
One good idea is to remove as much of the jargon as possible, and concentrate on understanding the basic and fundamental terminology that is needed to teach and explain the essentials of English grammar, in line with the needs of school pupils and English language learners. Here is a start – a short glossary of the thirty fundamental terms used to describe the elements and functions of English grammar.

Wyse, Dominic (2022) How grammar is taught in England should change. in The Conversation,, April 2022.

Website and texts © Linguapress.com 2009 - 2023 except where otherwise indicated
Contact: Use the form on our get in touch page

Copyright information.
Linguapress reading resources are free to view, free to share,  free to use in class, free to print, but not free to copy..
If you like a page and want to share it with others,  just share a link, don't copy.


All articles published on this website remain the copyright © of Linguapress.com and/or their individual authors.
Picture above by Geralt.

Multi-copying of  resources is permitted for classroom use., including use on a school's  own limited-access internal intranet. Copying to any publicly accessible Internet site is not permitted

Linguapress respects your privacy. Cookies are used for purposes of statistics, interaction with social media, and some advertising. No personal details are tracked. If you are OK with this click otherwise find out more about cookies