The verb to have

Have you got yours?
The new compact grammar recommended by IATEFL Voices , EFL magazine and other English teaching reviews 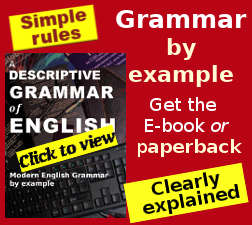 Ebook from just £3.99 / €4.49
Print  & ebook from Amazon,
Print book from Barnes & Noble, Waterstones  & other  good bookshops
The verb have is one of the two most frequently used verbs in English, so it is vital for learners to know how to use it correctly.   Have can be used in three different functions in the sentence.
1. As a main verb    2. As an auxiliary verb, and  3. As a modal auxiliary verb.

1. The verb to have as a main verb

The main verb to have is one of the core verbs of the English language, and is principally used to express possession, ownership or acquisition.

In this usage, it is a transitive verb, and must therefore be followed by a direct object. The direct object of to have can be a noun, a noun group, a pronoun or a numeral.


Examples of use of the verb to have as main verb

I have an idea.  (possession)
The ruler's son has several big cars. (ownership)
I'll have a strawberry and vanilla icecream, please. (acquisition)

1.1 Affirmative forms of the main verb to have

Abbreviated forms of have:

As a main verb, have and has are not normally abbreviated , though shortened forms 've or 's are found in some common expressions such as "I've an idea".
Abbreviated forms are more common with the present perfect and past perfect forms, but note that in this case it is the auxiliary that is shortened, not the main verb which always remains had. (Example: We'd all had a good time).
More examples below.

1.2. Negative forms of the main verb to have.

Exceptions: There are some exceptions where the negative form of the main verb have uses the negative structure of the auxiliary, notably some common expressions such as "I haven't a clue" (= I don't know) or "I haven't the time"; but even with this second possible exception, it would be more normal to say "I don't have (the) time" or "I haven't got time".

My father has three brothers and two sisters. (possession)
The doctor had a lot of experience.
He has three Rolls Royces and a Bentley.  (ownership)
Where are the scissors? Do you have them ?
The house has eight windows and three doors.
I've had three phone calls so far today.  (acquisition)
Before getting into his car, he'd had six glasses of whisky....
"Romeo and Juliet" is a tragedy; it doesn't have a happy ending.
I don't have any brothers or sisters.
We haven't had any complaints so far.
If he hadn't had those mushrooms, he wouldn't be ill.

Particularly in spoken English, have as a main verb, meaning own or possess or receive  can be consolidated by adding the participle got.  Here are the same example sentences, consolidated by got when this is a possible alternative – notably in the present tense.
Replacing the past form had by got is a different question. Though it is sometimes possible when had means received (=acquisition), in other cases (in italics)  this change of verb is either impossible, or will change the meaning of what is being said.

I've got an idea.
My father has got three brothers and two sisters.
The doctor had a lot of experience. (had = possessed)
The doctor had got a lot of experience. (had got= had acquired)
He has got three Rolls Royces and a Bentley.
Where are the scissors? Have you got them ?
The house has got eight windows and three doors.
I've got three phone calls so far today.
Before getting into his car, he'd had six glasses of whisky.... (had = drunk)
"Romeo and Juliet" is a tragedy; it hasn't got a happy ending.
I haven't got any brothers or sisters.
We haven't got any complaints so far.
If he hadn't had those mushrooms, he wouldn't be ill.  (had = eaten)
For more about this, see Get and got

2. The verb have as auxiliary

The verb have is used as an auxiliary to form the present perfect and past perfect forms of other verbs.

2.2. Contracted forms of the auxiliary verb  have.

As an auxiliary, have, has and had are frequently contracted to the forms 've, 's and 'd, when this is possible - i..e. after pronouns, but it depends on the type of English used.
See more examples below.

2.3. Negative forms of the auxiliary verb  have.

The standard negative forms of the auxiliaries have, has and had  are haven't, and hasn't and hadn't.
Example:  I haven't finished my lunch.  More examples below.

Take care: Forms using do (don't have, doesn't have etc) are never used as negative forms of the auxiliary verb have, only of the main verb have. (see above).

Also note the word ain't,  a popular alternative to haven't or hasn't, as used in the Rolling Stones' classic hit  "I ain't got no satisfaction".

Verb forms using the auxiliary have can also be put into the passive.
Other tenses can be formed, including tenses with modal auxiliaries: examples
You could have been seriously injured.     They must have been dreaming.

Examples of use of the verb have as an auxiliary

For information on "have to" as a modal verb, see Modals of obligation.

★ ★ ★  FOR TEACHERS
&  MOTIVATED STUDENTS
EXCEPTIONAL !
A reference grammar  described as "a welcome treat" !
And by the flagship Voices Magazine, the journal of the I.A.T.E.F.L.

Find English online stores that deliver to your country