Like many teenagers, Martin needed a bit of money; and the offer of a job clearing out an old house seemed to be just what he needed. But why did McAlister really want everything to be packed up in boxes?. 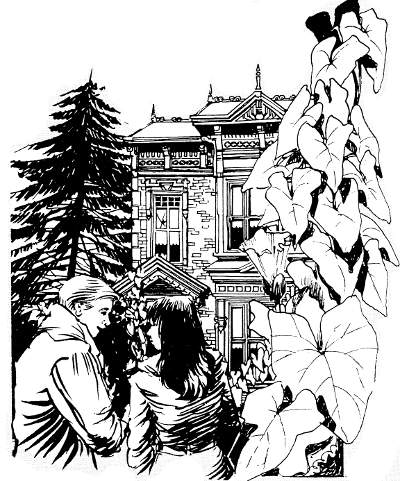 Note: words in red italics are the subject of a vocabulary exercise below.

He led them into the sitting room. "O.K., you know what to do. Sort out all the junk in this house, empty all the drawers and cupboards and wardrobes, and pack the whole lot into boxes. Wrap up everything fragile in newspaper first, of course, and don't break anything! Number the boxes, and make a detailed list of the contents of each one. O.K.? And no mistakes! McAlister'll be back on Friday at 3.30. It's all got to be done by then. Got it?"
Martin nodded.
"And by the way, there's no electricity in the house, so you'll have to stop at dusk. Here's the key! Don't lose it!"
Then, with a rapid goodbye, the young man went off, leaving them alone in the house.
"What a strange guy!" said Emily, once they were alone.
"Yes; he's not the bloke I met the other day."
"Are you sure we're meant to be doing this?"
"Why not? I expect they're getting it all cleared out, because the owner's died."

The house was like Ali Baba's cave. Whoever had lived there seemed to have travelled all over the world, bringing back bric-à-brac and ornaments from every country he visited. By Wednesday afternoon, the dining room contained 73 carefully packed boxes, each with a detailed list of contents; yet there were still three bedrooms to finish.
At 3.15 on Thursday, Emily and Martin were upstairs, when there was a knock on the front door.
"Who's that?" asked Emily.
"Don't ask me! Let's go down and see."
"Be careful Mart; don't go letting any old person in. I'm getting rather suspicious about this whole business!"
Before opening the door, Martin put on the burglar chain; then he opened the door just enough to see through. There was a man in overalls the other side.
" G'd afternoon," said the man. "Are you Martin".
"Yes. What is it?"
"I've come to pick up the first boxes for Mr. McAlister."
"What? Today? He said he'd come back on Friday."
"Did 'e? Well I've got an order to pick 'em up this afternoon!" And he shoved a printed form through the crack in the door.
Martin looked at the piece of yellow paper. Blagdon Removals and Storage Service, it said at the top.
Once Martin had undone the burglar chain, the man came in. When he saw the boxes, he whistled.
"Blimey! All them?"
"Yes, and we haven't got round to the top floor yet."
"Well then, you'd better give me a hand gettin' all this into the van."
Emily appeared on the landing. The man looked up at her.
"Afternoon Miss. You workin' here too? Come and give us a hand with these boxes!"
Emily hesitated.
"Come on Emmy," said Martin. "Lend a hand."

"Thanks kids!" said the man, as he climbed back into his cab. "They'll pick the rest up tomorrow."
The van drove off.
"I don't like this at all," said Emily all of a sudden. "The whole thing's extremely fishy. That man wasn't up to any good, I could see it in his face!  I'm packing it in. You can finish the job yourself if you want, but I'm clearing off!"
"Oh come on Emmy," answered Martin. "I'll never get the last rooms finished by myself."
"Too bad; I don't like it. I'm off. I reckon we've been helping steal the whole contents of someone's house. And that McAlister guy; I bet he doesn't turn up tomorrow to pay you. We've just been done. I'm going to the police!"
Martin's heart sank into his boots. Of course, Emily was right; suddenly it all fitted in.

After lunch next day, Martin and Emily returned to the house; but with them were four policemen.
Since no one really expected McAlister to turn up again, they were more than surprised when, at exactly the hour arranged, the man with the beard came to the front door, and let himself in.
"Martin!" he called.
"Up here," Martin answered from the top floor of the house; but before McAlister got to the bottom of the stairs, he was challenged by two big men. "Don't move!" shouted one of the local police constables.
McAlister stood still, then announced. "It's O.K.. C.I.D."
"Check 'is pockets!" shouted one of the policemen.
They checked, and they found an unexpected collection of things. A two-way radio, and a card identifying the holder as Detective Inspector Peter Swanning.
"I'm very sorry, Sir!" said one of the policemen.
"That's O.K., constable. You were only doing your job!"
"And what are you doing, Sir?"
"Me? Well, I'm just running a little undercover operation to help trace stolen antiques!" And he turned to Martin and Emily. "Good work, you two! You've been a great help! You see, 200 of the objects you packed up have got electronic tracking chips hidden in them, and we can follow their movements all over London and the south! We've already learned a lot of interesting things!"
"So the guy yesterday....." began Martin.
"Ah!.... Now he fell right into it, didn't he! He thinks he's been very clever lifting half the boxes before I took them! Little does he know....."
"I told you he was up to no good!" said Emily.

WORD GUIDE
Junk : bric-a-brac, nod: make a movement of one's head:  any old person : anyone at all (whatever their age!) - business : operation - overalls : work clothes - Blimey !  : Oh!  - landing : space at the top of stairs - fit in : become clear - constables : policemen - CID : the Criminal Investigation Department, a service of the police - undercover - secret -  lift : steal, take away

Return to Linguapress site index
Printing: Optimized for A4 printing with the Firefox or Chrome browsers
Copyright © Linguapress.  Do not copy this document to any other website

In list a there are ten phrasal or prepositional verbs used in the text: in list b there are synonyms which are appropriate in the context of this page. Match each word in list a with its synonym. (All words are given in the infinitive)..
When Martin returned to school, his friends asked him lots of questions about his unusual "job". Here are some of his answers. What questions could his friends have asked?

3.    Oh, just like an ordinary removals man. Quite strong, you know.

For teachers:  using this story in class :

See the exercises on the Student worksheet above.

Written expression: Students should imagine that either Martin or Emily is their pen-friend: they have just received a letter from one or the other, telling the story in about 200-250 words. Get each student to imagine, and write down, the letter they have received. To get them going, here is the start of the letter.
Dear .......     How are you? I hope you're well. I am! But I'm writing to you to tell you all about an amazing adventure I had with my friend Emily / Martin.     During half term,.....

This teaching resource is © copyright Linguapress 1996-2016.
Revised 2015 . Originally published in Freeway, the Intermediate level English newsmagazine.
Republication on other websites or in print is not authorised

All articles published on this website remain the copyright © of Linguapress.com and/or their individual authors.
Reproduction is authorised exclusively for use by students for personal use, or for teachers for use in class.
Copyright 1996 - 2015
Multi-copying of this resource is permitted for classroom use. In schools declaring the source of copied materials to a national copyright agency, Linguapress intermediate level resources should be attributed to "Freeway" as the source and "Linguapresss France" as the publisher.
Multicopiage en France: en cas de déclaration CFEDC par l'établissement, document à attribuer à "Freeway", éditeur "Linguapress"..