Jewel, the voice from Alaska 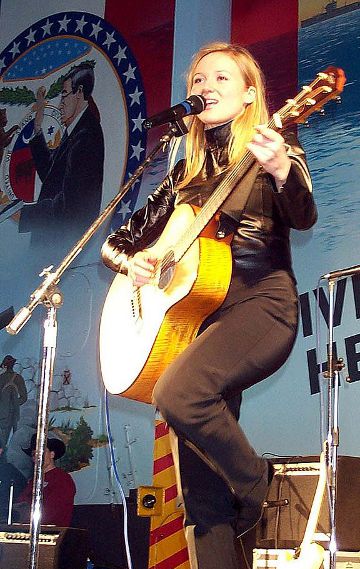 If you drive 200 miles down the lonely road leading southwest out of Anchorage, Alaska, you'll eventually reach the small town of Homer  - an isolated community, population 4000, near the end of the Kenai peninsula.

Maybe by Alaskan standards it is not too wild. At least there is a road - the kind of luxury that is not offered to every community in America's distant northernmost state. In winter time, the snowplows cut through the snow, leaving it banked up twenty feet high on either side of the road. "You can drive it," says Jewel, "If you're a good driver."

This is where Jewel grew up. Her childhood was spent on a 400-hectare homestead, with no television and no running water. As a child her main occupation apart from going to school, was looking after her horses.

Jewel was born in 1974 in Utah, the daughter of a Swiss-born father and an Alaskan mother; her parents, who were Mormons, earned a living as social workers, and also as a folk-singing duo.

When Jewel was a baby, the family moved up to Homer. There was work there for her parents in the region's tourist hotels, whose managers were delighted to have some locally-resident folk singers; when she was six, Jewel and her brothers joined the family group, the Kilchers. The singing family was a big hit, becoming one of Alaska's most sought-after acts. However, her parents did not want to go down the commercial road followed by certain other singing families, and did not make any records.

When Jewel was eight, her parents divorced; it was a heart-wrenching moment for Jewel when her mother left the family home, and headed for the warmer climate of San Diego, leaving Jewel and her brothers with their father. To cope with the divorce, Jewel found comfort with her horses, and also turned to writing poems and songs.

"For a child," she told the magazine Interview, "Divorce is like being torn out of the only air you've ever known. My pen became, to a large degree, my oxygen supply."

As she grew older, people in Homer increasingly recognized the musical talents of the young Kilcher girl. At age 15, when she won a 70% scholarship to the prestigious Interlochen Arts Academy in Michigan, Homer residents chipped in to cover the rest of the fees.

Before going to Interlochen, Jewel had been thinking of becoming an opera-singer; but she did not particularly like her two years in Michigan, and while there her tastes changed, she took up the guitar, and began writing her own songs.

After graduating, she went to join her mother who was living a fairly precarious life in San Diego. At first things did not work out too well. Jewel found jobs, but seemed to lose them almost as quickly; employers did not really appreciate the way she spent too much time talking to customers and employees, rather than getting on with the job.

Eventually she got a folk-singing job at the Innerchange, a popular coffee bar in Pacific Beach. And that, as they say, is where things really began to happen.

Jewel's Thursday night spot soon became the most popular event of the week at the Innerchange; people started pressing in to see this beautiful 19-year old blonde folk-singer, and by 1994, she was doing four shows a day, and still the people kept coming.

Naturally, word soon got around that there was this amazing young folk-singer at the Innerchange, and some record company executives came down from L.A.; the men from Atlantic records liked what they heard, and within weeks they had offered Jewel a recording contract.

Jewel's first album, partly recorded live at the Innerchange, came out in 1995. At first it went nowhere, taking 14 months to reach the Billboard top 200. Since then, everything has fallen into place. In 1997, Pieces of You was the second highest selling album of the year in the USA (4.3 million copies sold), and so far now it has sold over ten million copies worldwide. Now, at the end of 2014, she is working on her fourteenth album.

Though Jewel is now a megastar, she remains strongly attached to her Alaskan roots, and looks forward to her visits back home. "I'm not American," she says, "I'm Alaskan. It's a different country. People look at me very oddly in the States, but at home I fit right in."


Copyright notice.
This resource is © copyright Linguapress 1999 - 2015.   Originally published in Spectrum magazine.
This text may not be reproduced on other websites nor in printed form without written permission from the publishers. Reproduction is authorised exclusively for personal use by students, or for use by teachers with their classes.

Read the article about Jewel Kilcher, the put these events into the correct chronological order.

Then use these events as the framework of a short biographical summary of Jewel Kilcher, to be written using between ninety-five and a hundred and five words (no more, no less).

This resource - text and photos - © copyright Linguapress  1999-2014.
Updated from an article originally published in Spectrum magazine, 1999
Reproduction is authorised exclusively for personal use by students, or for use by teachers with their classes.