A REMARKABLE STORY OF SUCCESS 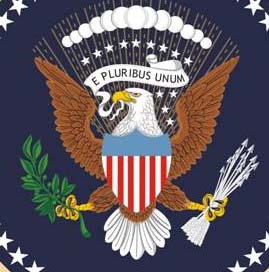 When it comes to wildlife, the stories that are told in magazines and on television tend to be stories of catastrophe and destruction – stories about the disappearance of species in the face of ever-more destructive human activity.
So it comes as nice change to learn that there are exceptions - some of them quite remarkable; and as far as the United States is concerned, there can surely be no more encouraging story than that of the famous "bald eagle",  saved at the eleventh hour from the possibility of total extinction in all but the most isolated of regions.
No doubt the fact that this magnificent bird of prey is America's national symbol has something to do with it; but for over a hundred years, these great birds' symbolic status did little to save them from destruction.
It is estimated that there were in the region of 100,000 bald eagles in the USA in the year 1782, when their image was first adopted as a national symbol by the young States. This great bird,  with its wingspan of almost two metres, was almost a natural choice for those who were looking for a symbolic beast to stand alongside the lion of England or the Russian bear. After all, it could be found virtually throughout North America, and was also the only eagle unique to the continent. 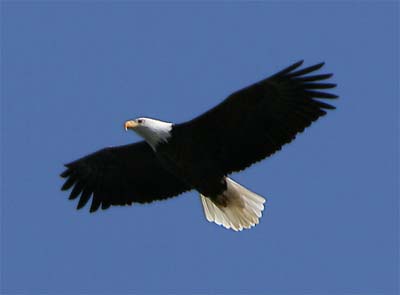 Yet although they had chosen it as a proud national emblem, Americans did little to ensure its survival; in the course of the nineteenth century and the first half of the twentieth, the bald eagle slowly but surely disappeared from state after state, a victim of spreading urbanization, new farming techniques, and the shotguns of indiscriminate hunters.

In 1940, noting that the national bird was "threatened with extinction," Congress passed the Bald Eagle Protection Act, which made making it illegal to kill, harass, possess (without a permit), or sell bald eagles; but that was not enough to save the bird. By the early 1960s there were fewer than 450 nesting pairs in the contiguous USA; only in Alaska was their survival still guaranteed.
In 1967, bald eagles were officially declared an endangered species throughout the United States south of the 40th parallel; and a massive information campaign was launched by the federal government and by wildlife organizations, to try and save the nation's emblem, and protect its habitat from further destruction.

Among all factors that had led to the eagle's destruction, the greatest was almost certainly the massive use of pesticides by American farmers, from the 1940's onwards. One such pesticide, DDT, was sprayed on croplands throughout the USA and its residues washed into lakes and streams, where they were absorbed by fish. The contaminated fish, in turn, were consumed by bald eagles.

The chemical interfered with the eagle's ability to develop strong shells for its eggs. As a result, bald eagles and many other bird species began laying eggs  with shells so thin they often broke during incubation or failed to hatch. Their reproduction disrupted, bald eagle populations fell sharply. It was not until after the dangers of DDT became known, in large part due to Rachel Carson's famous book Silent Spring, that this chemical was banned for most uses in the United States in 1972.

As the extent and speed of the decline in eagle populations became apparent, the U.S. Fish and Wildlife Service developed a captive-breeding program at its Research Center at Patuxent, Maryland. Here scientists increased the species' breeding potential by removing each first clutch of eggs as soon as they were laid, and incubating them artificially. The bald eagles would usually then lay a second clutch, which they were allowed to incubate themselves. In all, 124 bald eagles were hatched at Patuxent, and subsequently returned to the wild, during the critical years.
Today, thanks to years of protection and breeding programs, the decline in the eagle population has been reversed, and numbers have begun to grow again. There are now over 4000 breeding pairs south of the 40th parallel, and the bald eagle has been officially taken off the list of endangered species in the USA. Nevertheless, it remains officially classified as a "threatened" species, and one which is protected by no fewer than three acts of Congress - with two other acts banning theft, sale or possession of its eggs.
Perhaps that is in the end the only way  to ensure the survival of America's most famous bird  . Even this high degree of protection is not enough to save the bald eagle from the most ruthless or thoughtless of hunters; there are those who will shoot anything for pleasure.
Last year, a Florida man was fined $1500 for shooting an eagle; he got off very lightly, given that federal law allows prison sentences and fines of up to $100,000 dollars for those who knowingly kill or capture these magnificent birds. WORDS

Copyright notice.
This resource is © copyright Linguapress renewed 2022 - Document updated 2015.   Originally published in Spectrum magazine.
This text may not be reproduced on other websites nor in printed form without written permission from the publishers. Reproduction is authorised exclusively for personal use by students, or for use by teachers with their classes.

Students should reduce each paragraph of this article to no more than 20 words, attempting to keep all the essential information.

What expressions, used in the original article, mean:

Add the necessary word endings, and complete words, to complete this extract from the article. Take care! In four cases, no ending or extra word is needed.

The chemic   interfer  with the eag  ab  to deve  strong shells for its eggs. As a result, bald eagles and many other bird species be  lay  eggs that had shells   thin they often br  during incub or fail  to  . Their reproduction disrup,  bald eagle populations fell sha. It was not until after the dangers of DDT bec  know in large part due  Rachel Carson's famous book Silent Spring, that this chem  was ban for most uses.
As the ext  and speed of the decline   eagle populations became apparent,   the U.S. Fish and   Service developed a captive- program at its  Center at Patuxent, Maryland. Here scient increas the spec breed potential by remov  each first clutch of eggs as soon as they were l, and incubat them artif The bald eagles w usually then lay a second clutch.