Britain's housing minister Brandon Lewis recently annonced a plan to build a million new homes in Britain in five years - many of them in rural locations.  But housing associations fear that there will still be a major shortfall in affordable housing in rural areas, as demand continues to outstrip supply.... and other associations fear that too much of the natural environment is being used for building.

or The Searchers, a tale of country folk 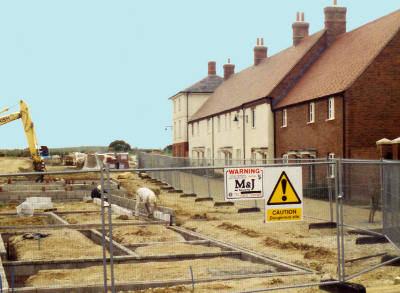 There's lots of new building going on in the English countryside
Bob Searcher is 25; born and brought up in the village of Umbridge in rural Wiltshire, he has no desire to go and live anywhere else. He is perhaps part of a dying race in England, a rural working class man. Bob left school at 16, did a course in bricklaying at Wiltshire College, and today he works as a building labourer.
At least he has a job; and Carter's, the construction company he works for, are keen to keep him on as they know that Bob is a local lad who is likely to be a stable employee. Many of Bob's workmates come from Eastern Europe, and are only in the UK for a few years, to earn better wages than they would get back home; and they move from place to place.
Next week, Bob and his girlfriend Rosie are getting married, and they would really love to set up house and start a family. But how can they do so?
They are not exactly thrilled by the prospects: either they can live in a couple of rooms rented out on Mr. Archibald's farm; or else they can live with Bob's parents or in-laws, hoping one day to get a council house in Umbridge, if there is one.
As for buying their own house, as their parents and grandparents did, that is out of the question, unless they are willing to take the one run-down cottage in the village that is for sale; the trouble is that it's been on the market for three years now, as nobody wants to buy it, wedged in as it is between the main road and the pig-battery. No wonder it's going cheap!
There's nothing else in Umbridge that Bob and Rosie can afford.
For ordinary rural working people, those who provide the everyday labour without which the countryside cannot function, finding a place to live can be an insoluble problem - particularly in the south of England. 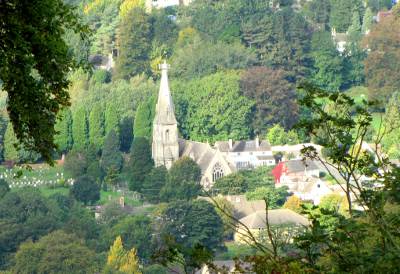 More and more poeple want to live in the country - which is forcing up the cost of housing
In recent decades, the rural exodus of the past has gone into reverse, as hundreds of thousands of people have begun moving out of cities and towns, in search of the good life, a more natural or peaceful lifestyle in the country. This has inevitably led to a rise in rural property prices.
The pretty cottage, that once belonged to Rosie's aunt, is now lived in by an executive from a computer company, who commutes twenty miles into work every day; the former working man's cottage next door (a real "bijou", the estate agent called it) belongs to Jim and Victoria Cityman, who recently retired to Umbridge after living in London all their lives.
The other cottage that appeals to Bob now belongs to an architect, who spends the occasional weekend there, and rents it out as a holiday cottage for most of the summer. The architect bought it three years ago for £650,000 - far more than Bob or Rosie could ever hope to spend on a house.
So Bob and Rosie know that they just have to sit and wait, and hope that one of the rare social houses in Umbridge becomes available, perhaps within three years.
In the mean time, Bob has resigned himself to the idea of building his own house; he knows he can do it, if he gives up all his weekends; luckily he has a mate who's an electrician and a cousin who's a painter. If he built his own house, he would also be able to buy a cheaper plot of land, as self-build homes can be put up on land that is not normally zoned for building, and is therefore cheaper. But it will all take time, and he'll need to borrow money to achieve his project.
Right now, he's waiting to see if new rural housing projects will actually lead to the building of any new "affordable housing" in Umbridge. He's keeping his fingers crossed, but he isn't counting on it.


Clear, simple,  and the only English grammar book you'll ever need

Copyright notice.
This resource is © copyright Linguapress  updated 2020.   Based on an article originally published in Spectrum magazine.
This text may not be reproduced on other websites nor in printed form without written permission from the publishers. Reproduction is authorised exclusively for personal use by students, or for use by teachers with their classes.

Complete these sentences from the article, using appropriate words in the right structure.


Words: Umbridge and The Searchers

In the UK, newspapers and magazines just love to play with words when writing a short title; the title of this article is a classic example of the technique.
An alert English reader will immediately understand the double meanings of the title "Life in Umbridge", and the pun on the name Searchers
The word Umbridge is invented by the writer of this article: it is a half-way mix between two other words Ambridge and umbrage.  Ambridge is the name of the (fictitious) archetypal English village, which is the location of "the Archers", the world's longest-running radio sitcom or series about country people. Umbrage is a synonym for anger or frustration, as in the expression to take umbrage (to get annoyed or angry)

Updated from an article first published in Spectrum, the advanced level English newsmagazine.
All articles published on this website remain the copyright © of Linguapress.com and/or their individual authors.
Reproduction is authorised exclusively for use by students for personal use, or for teachers for use in class