The story of the BBC

During the Cold War, millions listened to the BBC behind the Iron Curtain, in their quest for news about things that their own state radio stations refused to mention. Throughout  the world, even today, people listen to the BBC World Service as a reliable and honest source of news.
More recently,  BBC World television has become one of the most important international TV channels. In the next few years, there will be lots more exciting innovations for both radio and television.
Broadcasting, perhaps the greatest invention of the last century, has come a long way; and the BBC is one of the most important and trusted broadcasters in the world today. 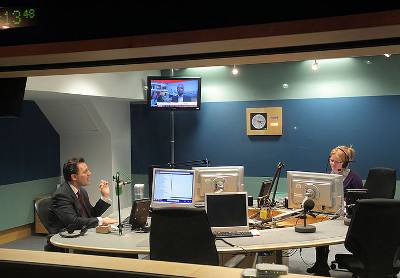 The British Broadcasting Company was established in 1922. Four years later, it changed its name  to the British Broadcasting Corporation, better known as the BBC, and that is how it has remained ever since.
It was not the world's first radio station. There had already been public radio broadcasts in Britain before 1920, and by 1922 radio stations were operating in Russia and in America. In the Soviet Union, radio was owned, operated and rigidly controlled by the state. In the USA it was a great new adventure for free enterprise. With its new idea of public service broadcasting, the British government chose the middle road.
From the beginning the BBC was a public service radio, but also an independent operator. Except during the war years, it has never been controlled by the government. On the contrary, several British government ministers have complained, over the years, that the BBC was biassed against them!
In the early days of BBC radio, there was not a lot of news on the radio. There were music, drama, discussions and children's programmes; but news was not broadcast until after 7 p.m., to avoid competition with the newspapers!
In 1936 the BBC began the world's first television service. Only a few thousand people in the London area could receive those first flickering images, which were broadcast using a screen of just 204 lines. Today we have 625 lines on ordinary television, and even more for HDTV. Nevertheless, people liked what they saw, and as the number of transmitters increased, more and more people went out to buy new television sets.
In 1937, tennis was broadcast from Wimbledon for the first time. Then in 1938, football's Cup Final could be seen, live, by hundreds of thousands of people, for the first time ever.
Yet on September 1st, 1939, in the middle of a Mickey Mouse cartoon, BBC TV stopped broadcasting. The Second World War had begun. It was not until June 8th 1946, on the day of the great Victory Parade, that BBC television started again.
Since then the BBC has become one of Britain's most famous institutions. Today it has several national television channels, lots of radio channels and a growing number of international services. It also has a very popular Internet site, with news stories from Britain and around the world. As far as programme production is concerned, the BBC is  Europe's biggest and most successful exporter of audio-visual material. In International competitions,  the BBC regularly wins  more prizes than other broadcasters.
In tomorrow's world, communications and the media will become more and more important. With almost 100 years of experience, the BBC is determined to remain one of the world's major players.


Return to Linguapress site index
Printing: Optimized for A4 printing with the Firefox or Chrome browsers
Copyright © Linguapress.  Do not copy this document to any other website

The story of the BBC

This teaching resource is © copyright Linguapress renewed 2022.
Revised 2020 . Based on an article originally published in Horizon, the easy intermediate level English newsmagazine.
Republication on other websites or in print is not authorised


Recommended for teachers and advanced students

Copyright notice.
All articles published on this website remain the copyright © of Linguapress.com and/or their individual authors.
Reproduction is authorised exclusively for use by students for personal use, or for teachers for use in class.
Copyright 2000 - 2020
Multi-copying of this resource is permitted for classroom use. In schools declaring the source of copied materials to a national copyright agency, Linguapress intermediate level resources should be attributed to "Freeway" as the source and "Linguapresss France" as the publisher.
Multicopiage en France: en cas de déclaration CFEDC par l'établissement, document à attribuer à "Horizon", éditeur "Linguapress"..

Linguapressrespects your privacy and does not collect personal data. We use cookies to provide the best online experience. If you are OK with this click   to remove this message, otherwise click for more details
if( document.cookie.indexOf("eucookie") ===-1 ){ $("#eucookielaw").show(); } $("#removecookie").click(function () { SetCookie('eucookie','eucookie',365*2) $("#eucookielaw").remove(); });