► You are here:   LInguapress English  ›
Intermediate reading  ›
The bicycle


With covid and the coming climate crisis, bicycles are getting more and more popular.  But where did the bicycle come from? Who invented this "velocipede"? . 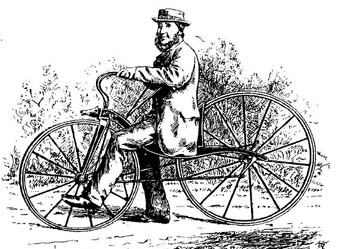 You may be surprised to learn that the humble bicycle was invented several years later than the railway locomotive! But the two-wheeler has come a long way since the day it was invented by a Scottish blacksmith, Kirkpatrick MacMillan, back (it is said) in 1839.

MacMillan developed his bike from an older wheeled vehicle, called a "hobby horse". This was a wooden horse with two wheels. The rider sat on the horse, and pushed the vehicle along with his feet. It was not a very fast or safe vehicle, since it had no steering and no brakes.

MacMillan, nicknamed Mad Pate, modified the hobby horse, by adding a system of articulated bars. The rider could push the bars back and forwards with his feet, and make the back wheel go round. He could also steer the bike, as the front wheel could be turned.

To demonstrate his invention, he cycled 60 miles to Glasgow! It must have been a terrible journey, on the roads of the day! Pate's bike did not have rubber tyres or springs.

Mad Pate was not recognised in his time, but other people became interested in bicycles. Twenty-five years later, a Frenchman called Pierre Lallemant designed and patented the first bicycle with rotary pedals; and in 1876, H.J.Lawson added another basic feature, "chain-drive".

Other features, such as rubber tyres and gears, have appeared since then; but the basic bicycle has not changed.

Since then the bicycle has had a magnificent fortune. Today, it is probably the most common form of transport in the world, especially in developing countries; and non-polluting and easy to ride, it has a big future as the town vehicle of tomorrow. Thanks Pate!

For teachers and  students

Also available in French
blacksmith: a blacksmith makes things out of iron - steering: means of direction - brakes: brakes help a vehicle to stop -  nicknamed: known familiarly as - articulated: with joints - steer : direct - -  rubber: a slightly soft material used on the outside of car wheels -  springs: springs make a vehicle more comfortable - to patent: to officially register an invention -  drive: traction -  features: aspects -  gears: most modern bicycles have at least 10 gears

Copyright © Linguapress.  Do not copy this document to any other website

The Story of the Bicycle

Read the article and say whether these statements are true or false:.

Imagine an interview between a journalist and H.J.Lawson, in 1876.
For teachers
CEFR level B2+.   Structurally this text is level B2; however its technical vocabulary takes it into the low C1 category.

Other ideas?
Help develop this resource by contributing extra teaching materials or exercises.
To contribute click here for further details

This teaching resource is © copyright Linguapress .
Republication on other websites or in print is not authorised


Copyright notice.
All articles published on this website remain the copyright © of Linguapress.com and/or their individual authors.
Reproduction is authorised exclusively for use by students for personal use, or for teachers for use in class.
Copyright 1991 - 2020