The first woman to be nominated by a major party as a presidential candidate, Hillary Clinton is a woman who inspires great enthusiasm, or great dislike.  This article was originally written for Linguapress's Spectrum magazine in 1994 by Nicole Bernheim, former New York correspondent of France's Le Monde newspaper. 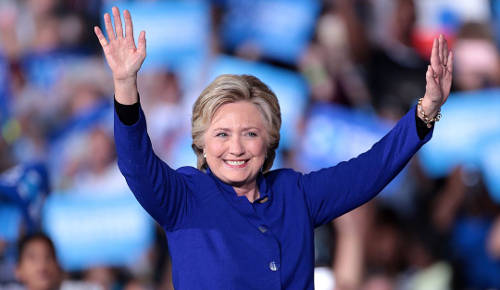 Hillary Clinton is certainly the incarnation of the dreams of many American women of her generation. She has got "everything": a family, a fine career, and a husband who not only supports her and approves of what she does, but also allows her to use her talents to the full.

Hillary Rodham was born in Chicago in 1947, the daughter of a textile manufacturer. Her family was comfortably off, but not rich; she had two brothers, and her mother did not work.
At school, she was always a brilliant student, though not the kind of girl who spent all her time in her books. On the contrary, she spent a lot of time on outside activities, something which is always greatly appreciated in American schools.
It was while she was still at high school that Hillary began to take an interest in social issues, working in the poorer districts of town among immigrant families, and helping them to participate in elections.
After graduating from high school, she went on to study at Wellesley College, one of the best universities on the East Coast, where she was elected President of the Students' Union. Photos taken at the time show her as a fairly plump young woman, dressed in rather shapeless clothes, and wearing large glasses. Looking smart was not one of her major concerns.
It was at Yale Law School that Hillary first met Bill Clinton, a good looking young man who, in spite of his reputation as a dilettante, was actually one of the brightest students in his year. The legend says that Bill finally "noticed" Hillary because she spoke so well.
At the time, Hillary was actively involved in the Women's Liberation movement, and seemed to be much more interested in her career than in marriage. When, several years later, she was asked how it was that, after a long complicated relationship, she finally ended up marrying Bill Clinton, she answered: "Because he was the only guy I dated who wasn't afraid of me!"
Meanwhile, while Bill had gone back to his native Arkansas, intending to follow a career in politics, Hillary became a brilliant lawyer in Washington, where she took part in the famous Watergate hearings. Though several major firms of lawyers asked her to join them, she decided in 1973 to leave Washington and join Bill in Arkansas. They got married in 1975, and Hillary joined a firm of lawyers in Little Rock (the capital of Arkansas).
In 1979, at the age of 32, Bill Clinton was elected Governor of Arkansas, becoming the youngest state Governor in the U.S.A.  A year later, Hillary gave birth to their daughter Chelsea, named after a favorite hit song of the 1960's.
During Bill's twelve years in office as Governor of Arkansas, Hillary helped him to radically reform the state's public school system, and establish a school medical welfare system that had no equivalent anywhere else in the United States.
As a solitary concession to the powerful conservative lobby in the Deep South, who were not accustomed to seeing wives working in partnership with their husbands, she agreed to add her husband's name to her own, and be called Hillary Rodham Clinton   just to show that she really was married.
She also changed her look, began to dress much more smartly, got a new hairstyle and replaced her glasses with contact lenses. She was ready for Washington.

For schools, teachers or students

Imagine that you have just interviewed Hillary Clinton about her early life. Here are her answers: what questions did you ask? Make sure that each question naturally elicits the answer provided.:
1.    Not really, but my father was quite well off.
2.    While I was still at high school.
3.    Yes, I was involved with a program to encourage immigrant families to take part in elections.
4.    I went to Wellesley College.
5.    No, I first met him at Yale.
6.    Well he says it was because he thought I spoke very well!
8.    Because he was the only guy I dated who wasn't afraid of me!
9.    No, I stayed and worked as a lawyer in Washington for a while.
10.    No, that didn't happen until 1979.

In class, or for homework: have students contract this article to about half the original length.