► You are here : The Mormons

The Mormons - A curiously American phenomenon

"Mormons" are followers of a strange American church that believes that the Americans are descended from the lost 13th Tribe of the Children of Israel. This religion was founded in the 19th century by a man called Joseph Smith, who said that God had shown him a third testament of the Bible, the "Book of Mormon", written in a strange language, on leaves of gold. Smith translated this divine book into English, and convinced a lot of people that his story was true. Nobody else ever found the books of gold: but Mormonism has become a powerful force in America today.
To Americans, Utah means "Mormons" - one of the most surprising religious groups in the USA. To this day, Mormons largely run Utah, as they have done since their ancestors first colonized the state in the 19th century. And even if, today, there are more and more non-Mormons living in Utah, it is still Mormons who govern many aspects of life in this part of the Mountain West.
Churches tend to play a major role in American life; while religion plays a relatively small part in people's lives in modern day Europe, it is still a major force in the USA - and perhaps no more so than in Utah, in the mountains of America's far west. 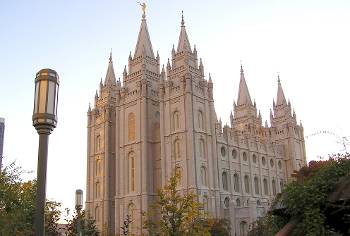 The great Mormon temple in Salt Lake City
Salt Lake City, the capital of Utah, is a remarkable city, one whose center is not a high-rise business quarter, but a temple. The Great Temple, the heart of the city of Salt Lake, is the building around which the whole city was designed, and the spiritual headquarters of one of the strangest, yet most active churches in America, the Church of Jesus Christ of Latter Day Saints. To many people, this church, which has  four million followers in the USA, is considered more as a sect, and better known, simply, as "the Mormons".
There are plenty of weird and wonderful religious groups in the USA; the quest for religious freedom was, after all, one of the reasons that caused the first pilgrims and colonists to leave Europe in search of a new life beyond the Atlantic.  Since those days, religious freedom has been a corner stone of American societies, and many unusual religious groups have been established over time.
The Mormons are one of the more surprising of these. This church, with its peculiar mixture of Christianity and apparent mythology, has survived and prospered, becoming one of the most powerful churches in America, controlling (as it always has done) the state of Utah,  and possessing enormous wealth. The Mormon church itself has an annual income estimated at $8.7 billion (enough to make place it among the biggest 60 corporations in the USA!). Furthermore, Mormons control a number of the biggest corporations in the USA, including the Hyatt and Marriott hotel chains.
For an outsider, Mormonism may seem like an absurd (or a worrying) joke. The introduction to the "Book of Mormon", the third testament of the Mormon Bible opens with these words: "The Book of Mormon is a volume of holy scripture comparable to the Bible. It is a record of God's dealings with the ancient inhabitants of the Americas."
For a non-Mormon, the story of the book of Mormon is rather hard to believe. According to the legend, the book, engraved on plates of gold, was discovered by a man called Joseph Smith in 1823, on a mountain top near New York.  Inspired by God, Smith was able to translate these books written in an unknown language, into English, and bring the translation down from the mountain. Unfortunately for the credibility of the Mormon church, Smith then hid the "golden tablets" where he found them, leading many people to conclude that he was really just a rather slick power-hungry charlatan.  No-one else ever saw the tablets, and no part of the original text in the mysterious language has ever been revealed!
Be that as it may, Smith quickly managed to persuade thousands of people that he was authentic, and soon built up a strong band of followers, whose devotion to their leader was total.
Persecuted and often ridiculed by other Americans, Smith led the Mormons on one of the biggest and most remarkable internal migrations in the history of the United States. After settling initially in Missouri, he was later forced to move his people on to Illinois, where his megalomania became even more apparent. His decision, in 1844, to run for the US Presidency provoked a surge of anger against the Mormons, as well as criticism from his own followers; and after a riot in the Mormon city of Nauvoo, the father of Mormonism was executed by local militiamen. 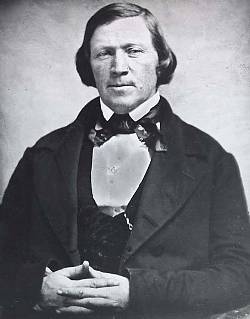 Smith's place was taken by a new leader, Brigham Young, revered as a saint by Mormons, mocked as a dictatorial tyrant by their opponents. Saint or tyrant, he was certainly not a calm and gentle man, but a leader who was willing to push his followers to the limits, and would not tolerate opposition to his views.
He it was who decided to uproot the Mormons once more, and take them in search of "the new Zion", a land in which they could establish their own independent state, undisturbed by anyone else. And thus, under his orders, thousands and thousands of "Latter Day Saints" trekked on foot with their carts across the American West, eventually reaching one of the driest and most inhospitable spots in the whole of North America, the shores of the Great Salt Lake.
Here, Young ordered them to establish their new Zion, in the place he named Deseret. The Saints were astonished at the news, as they had been led to believe they were going to fine farming country. Yet thanks to Young's determination, and to the streams flowing from the mountains, the settlers did actually manage to turn the desert into green pastures, and before long, a prosperous and well ordered community grew up.
In 1853, once the community was well established, the first stone of the great temple was laid: forty years later, in 1893, the building was finally completed.

Since then, Utah, largely populated by Mormons, has become a prosperous state, and the Mormon church one of the richest organizations in the USA.
If the founders of Mormonism appear to many observers as successful charlatans, their followers tended to be very devout people, and remain so to this day. Most Mormons live very sober lives, respect strict codes of moral behavior, and give a tenth of their income to the church. Visitors to Salt Lake City may complain that they find it hard to buy alcoholic drinks, but they appreciate the city's low crime rate and its clean streets, and are full of praise for Mormon hospitality and helpfulness.  On the negative side though, Utah has one of the highest rates of suicide and depression in the United States.
Many non-Mormons find it very hard to understand how it is that so many rational, intelligent and sincere Americans can, in today's world, follow a religion (many call it a "sect") whose beliefs are founded on a basis as dubious and implausible as the story of Joseph Smith.


Clear, simple,  and the only English grammar book you'll ever need

MORE ABOUT THE MORMONS:


The Mormons are the biggest and most dynamic "fringe" church in the USA, with about 4 million members (9 million worldwide), including 69% of the population of today's Utah. Originally ostracized in the USA for their anti-individualistic and cooperative social views, which had overtones of the socialist philosophies of European Utopians like Robert Owen and Fourier, the Mormons are now perceived as a very conservative and rather right-wing group of Americans. It is said that the Mormon church is the fastest growing church in America
They are the most evangelical of American churches, and thousands of young Mormons go abroad for a year or two as part of their training; unlike most Americans who get sent abroad, Mormons are made to learn the language of the country they visit before visiting it. Mormon missionaries can be seen all over the world, including in Europe. As a result, Mormons tend to have a better knowledge of international affairs than average Americans, and speak far more foreign languages  which means that they are particularly well represented in professions which require direct contact with people in other countries (such as the CIA and the diplomatic corps).
However, their evangelical activities in Central America have caused serious friction with local populations, Mormons being accused of trying to impose U.S. values and lifestyles on other nations.
There are other problems too. The Original Mormons were all white, and the Book of Mormon refers to the Latter Day Saints as having "white" skin. However, in an attempt to refute accusations of racism and to justify their activities on other continents, the Book of Mormon has recently been rephrased.
Among the Mormons' most controversial activity is their practice of retroactively baptizing non-Mormons who have died. Millions of people have thus been posthumously baptised into the Mormon church, without their knowledge or consent! To allow baptism of the right people, Mormons have the world's biggest genealogical data bank, kept in a nuclear fallout shelter in the heart of a mountain near Salt Lake. The bank contains records compiled from archives in America and all over Europe. According to the Mormons, only those who have been baptised into the Mormon church will be saved on the Day of Judgment.
Finally, as for polygamy, that other interesting aspect of the Mormon religion, it was officially banned over 100 years ago. Nevertheless, there are still Mormon men who live with several wives - or concubines. In 2001, after a trial that made national news in the USA, a Mormon man was sent to prison for having three wives.

to baptize: christen, accept as a member of a church - controversial: disputed, not always accepted - data bank: information bank - evangelical: proselytizing, trying to convert new members - friction: tension - high-rise: with very tall buildings - missionaries: people who go to another country to spread their religion - nuclear fallout shelter: undergroung vault that can resist a nuclear bomb - ostracize: exclude from ordinary society - overtones of: resemblances to - perceived: seen - polygamy: one man having several wives - posthumously: after they have died - refute: contradict - retroactively: with effect that is pre-dated - trial: legal hearing before a judge.

Starting with the expression in bold type, add more words to make up one correctly structured sentence for each line (a - j). Keep as close as possible to the meaning of the original article. You can use the words in any order, but do NOT change the verb tenses.

Replace the missing relative pronoun in these sentences: (which, what or whose?)


MORE ABOUT THE MORMONS