Smuggling contraband across the sea has been an active business for centuries. Until recently, it involved bringing in goods such as spirits and tobacco. Today, smuggling into Britain is more about drugs and human beings. "People trafficking" is the modern face of smuggling, and as always it is a lucrative business for criminal gangs 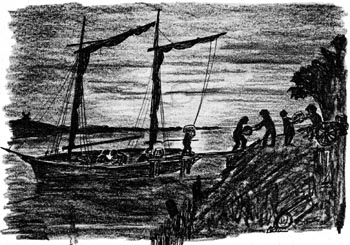 
Clear and concise,  a reference grammar for teachers and students

Updated from an article originally published in Spectrum magazine.

Printing: Optimized for printing.
Copyright © Linguapress renewed 2020.  Do not copy this document to any other website
Copying permitted for personal study, or by teachers for use with their students

Comprehension:
Explain the meaning of the italicized expressions in the article; then  make up sentences reusing the same expressions in entirely different contexts.

Descriptive narrative writing:
Imagine that you are a customs officer in 1700 ; you are watching the scene shown in the picture. Write a report next day, as a first person preterite narrative, describing what happened, what was being smuggled, and what you did.

Interactive: Text correction:
Correct the mistakes in this badly copied extract from the article.
The copy below is editable, i.e. you can make changes to it directly on your computer screen.
Do this exercise with or without consulting the original article. If you compare the two texts, this is an exercise in careful reading (a highly useful exercise!); if you look at the text below without looking at the original article, it will be an exercise in  grammar, memory and logic. The second variant of this exercise can usefully done by students working in pairs; you will need to argue with each other in order to reach agreement over what is wrong, and what the original text actually said.

March 28th 1960. It is death of night; in the small stream near Dymchurch, a city on Romney March, a black ship approaches a well-built landing strip. It moves noisily across the fields, speeds up, and ties down. Immediately, but without a pound, some thirteen figures converge from the bar and approach the waiter. A horse and car appear from somewhere, and the walk begins. In the place of quarter of an hour, the boat's captain is totally undone, carried into the bank and loaded into the car, and onto another one that follows him. Twenty seconds later, the goat, with opened sail, is turning round and driving back out to see whence it had come. Its captain, with a hundred bottles of finest cognac, is on his way to a hiding place, for latest dispatch to London.

An original article for Linguapress.com