If the Harley Davidson motorbike is something of an American legend, Sturgis is the book in which that legend is permanently refreshed. It is the world's biggest annual biking festival, the annual get-together for America's Harley fanatics. Gil Eble went there and sent back this exclusive report. 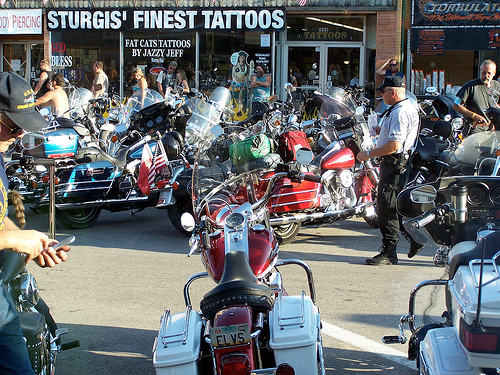 To imagine what "Sturgis" is like, you really need to go there; words cannot fully express the atmosphere of this small town in South Dakota (the middle of nowhere) when, each year, it is invaded by hundreds of thousands of American bikers.

They come from all over the USA, and from all over the world, most of them on Harley-Davidsons. There are old Harleys, new Harleys, big ones, small ones; standard ones, custom-built ones, shining ones and muddy ones. The riders come to watch, to talk, to discuss, to drink beer, and to meet friends; but most of all, they come for the atmosphere.

It was back in 1938 that the first wave of bikers came to this unsuspecting little town (the twelfth biggest in the whole state of South Dakota) in the heart of rural America. They had been invited along by J.C. "Pappy" Hoel, a native of the town who had a passion for "Indians" (the name of a type of bike), and decided to organize the first flat track races officially recognized by the American Motorcycle Association.

In the year 2000 the Millennium rally brought 633,000 people to Sturgis for Bike Week, a large percentage of them on Harleys; but though the races drew in huge crowds, the main thing most people wanted to do was to walk or drive round Main Street and the roads around it. On bike or on foot, there was little difference in speed; either way, it took about two hours to cover the two miles from the town center to the interstate.

As for the Sheriff and the State Police, they are always alarmed about the impact on the small tranquil community of the sudden and brief invasion of hundreds of thousands of people -- many of them tattooed! Police are everywhere, and it is said that there are over a thousand FBI agents in the crowd, passing themselves off as ordinary bikers. Yet now, after more than sixty years, the town of Sturgis has learned to live with the annual event!.

The press make a lot of noise whenever bikers are killed or injured; but there are not a lot of problems at Sturgis - and certainly no more than one would expect to encounter among an excited population of around half a million. In 2000, in spite of the huge numbers of visitors, there were only ten rally-related deaths, 363 drug offenses, and 111 people sent to jail, according to the organizers. Most bikers want to avoid trouble, and just to meet old friends and make new ones; but in any population of over 400,000, most of them males between the ages of 20 and 50, a week without any serious trouble would be exceptional under any circumstances!

On the plus side, the Sturgis rally brings in up to a million dollars each year in sales taxes and tourism taxes, for the state of South Dakota!

From Harleys to Hell's Angels 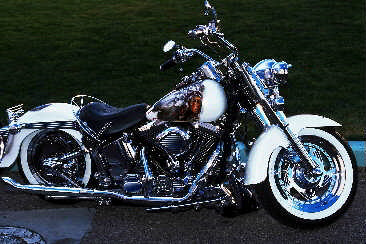 America's own bike, the Harley, developed into something of a cult object following the film Easy Rider, in which it starred with Dennis Hopper and Peter Fonda, riding to the music of Bob Dylan, Steppenwolf, and other cult groups of the time. No movie captured the spirit of the American sixties more than Easy Rider, a contemporary odyssey in which the Harley was the symbol of freedom and of non-conformity.

Rebels, rockers and romantics took to the roads on their Harleys, like pioneers on their ponies; they formed clubs and groups, with names such as Hell's Angels, Outlaws, Bandidos.

Many of those clubs, founded over thirty years ago, still exist, and the same bikers still belong to them; many of the bikers at Sturgis are noticeably older than those at big European rallies. But at Sturgis, the different clubs keep the peace. Outlaws, Bandits or Hell's Angels, they do not really live up to their names.

Of course, there are other more conservative bikers' clubs too, like the Harley Owners' Club; though they put in an appearance at Sturgis too, they have their own meeting a few miles away in another town. For the Harley is not only a bike for rebels, with or without a cause; it is an "establishment bike" as well. It is the American bike. It is the most popular bike used in almost every police force across the United States.

Printing: Optimized for printing.
Copyright © Linguapress.  Do not copy this document to any other website
Copying permitted for personal study, or by teachers for use with their students

Interactive exercise. Write active (not passive) sentences starting with the prompts suggested; you may add as many words as you need, and boxes will expand to take your answer:
Letter writing: Students should imagine that they have just arrived in Sturgis either as visitors to Bike Week, or quite by chance, and write a letter or a postcard to their American penfriend giving their impressions.

Radio sketch: Divide students into groups of about half a dozen (anything up to eight), and have each group script and be ready to act out a five to ten minute radio report on Sturgis, complete with interviews. People to interview could include a local shopkeeper, the organizers of bike Week, a police chief, and at least two bikers.

Definitions: Have students write sentences defining or explaining each of the following; in each case, the subject defined should be the subject and the opening words of the definition.

Note this sentence: There are old Harleys, new Harleys, big ones, small ones; standard ones, custom-built ones, shining ones and muddy ones.

"One" and "ones" are pronouns that can generally only be used to reflect count nouns, i.e. nouns that refer to countable (but not necessarily concrete) objects, such as Harleys, books or even ideas. This form is often used with the definite article, as in:
"Among those three bikes, which is the one you like best?"   "The one with the American flag on it; the custom-built one".

Remember, in English adjectives are not usually used alone. There are some exceptions (the rich, the poor, and many superlative forms such as the best, the first), but normally adjectives need to qualify a noun; "one" is used as a pro-form to avoid repeating the noun.


The acclaimed compact English reference grammar for the 2020s