English teens discuss the pros and the cons

School uniforms are fairly common in England, Britain in general. In fact, they have even become more common in recent years, as some schools have reintroduced them. But in all schools, both teachers and pupils have different views on the question – and probably they always will do.  Freeway interviewed students at a girls-only high school in the middle of England, where all students except those in year 12 are obliged to wear a uniform. 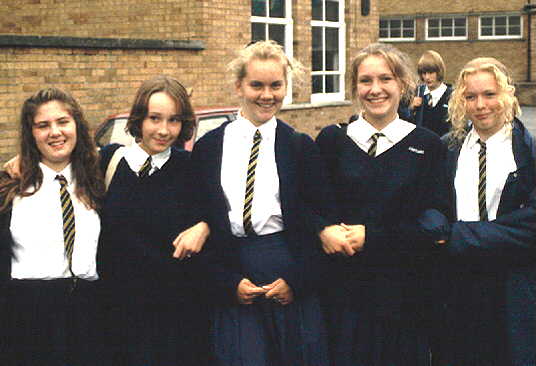 ANITA: It distinguishes you from the other schools! Like our uniform's totally different to the Glede* uniform, it's a lot stricter yeah.... It just makes you stand out. It makes you look like a community, rather than just normal people, if you know what I mean!

ANITA: No I didn't mean it like that! Just like everyday people on the street, that aren't at school. You can tell that you're still at school, you're still doing whatever... in education. I think it looks really smart as well, and then we get a lot of people, like, sayin' how nice we look...

SARAH: Don't you think though that by wearing a certain uniform, the people who see you, they are going to identify you with the school, and have a stereotypical attitude about you. It's like, um,  people think about skinheads; they all dress the same if they want to belong to that group, and people immediately think they're all going to be hooligans, but it's not necessarily true.

SARAH: That's another thing about uniform though; even if everybody wears exactly the same, they're all going to look different, because the same uniform isn't going to suit everybody. Therefore people who are a bit overweight or whatever, they're going to get ragged about it something rotten; I mean they do in this school, because our uniform is so unflattering for anybody who's a bit chubby!

EMMA: I think people should have the chance to - like - be individual when they wear clothes... It's like we're being forced to conform to something we don't want to do. I can remember..... (now we're in the sixth form, we don't have to wear uniform) ...  but I can remember in the first year, second year, even if you like just stepped out of line slightly, by wearing different coloured socks than what you were supposed to, like they really came down on you. It was really bad. It seemed really picky as well.

KATIE: I think that by putting us all in the same uniform, they're somehow trying to suppress our own identities; and they're saying like "oh we all have to look the same, we all have to think the same." That's how it seemed to me lower down the school anyway.

SARAH: I think, um... I came from primary school, and we didn't have to wear a uniform there; and coming to secondary school and wearing a uniform, I don't know, I really enjoyed it, I used to be proud of it, of wearing it. But I think, yeah, there are faults in it, but I think there are the advantages as well!

KATIE: I think that here sometimes, more emphasis was placed on the uniform, rather than our work; for  – speaking personally –  I got caught once by Mrs. Parker lower down the school, for wearing a too short skirt! And she's been after me ever since! So there you go! I prefer it now that we don't have to wear a uniform, but in actual fact, I didn't really mind wearing it lower down the school...

* The Glede: another school in the same town.

chubby: slightly fat - distinguishes you: shows you are different - emphasis: accent, importance - individuality: personality - overweight: too heavy - picky: unfair, unjust, discriminating - ragged: teased, made fun of - something rotten: in a bad way - unflattering: they do not make you look good - whatever: anything -


Return to Linguapress site index
Printing: Optimized for A4 printing
Copyright © Linguapress.  Do not copy this document to any other website
Copying permitted for personal study, or by teachers for use with their students

Find these words in the dialogue, and explain what they mean in the context:

Students should sum up the point of view of Rachel, Anita, Sarah, Emma and Katie.

This discussion is an original live recording; it has not been rerecorded in the studio to make it easier to understand for intermediate level students. As an original recording, it may be hard for students to follow, as some of the girls speak quite fast. However the language is not too difficult.  We suggest listening to the  discussion at least twice with the written text on your screen, or on a printed sheet. Then, once you are familiar with the dialogue, listen to it once or twice without the written text in fromt of you.
As an original recording, it shows how people use "fillers" and pauses when speaking. Most of the fillers have been included in the written transcript, words like whatever, like, um..

For and against: Imagine that the principal of your school has decided that from the start of next school year, uniform will be recommended for all pupils in your school: a) decide what uniform you would like to have (strict, flexible, style, etc.), and b) Write an article in English for your local newspaper, explaining why the decision has been made, and the different points of view that have been expressed on the subject of uniforms.


This teaching resource is © copyright Linguapress renewed 2020.
Revised 2017 . Originally published in Freeway, the Intermediate level English newsmagazine.
Republication on other websites or in print is not authorised