Over the past 50 years, obesity has become a major health problem in the USA


One of the things that most surprises Europeans who set foot in the USA for the first time is the huge number of fat people. Not just "fat" people, such as one finds all over Europe too, people who are just a little bit overweight and happy to be so; but people of sometimes massive proportions, obese people who are not just twenty or thirty pounds heavier than they should be, but sixty or seventy or eighty pounds above normal. Even children. Fifty years ago, Americans were not overweight in the way they are today; so what is it that has brought about this change? 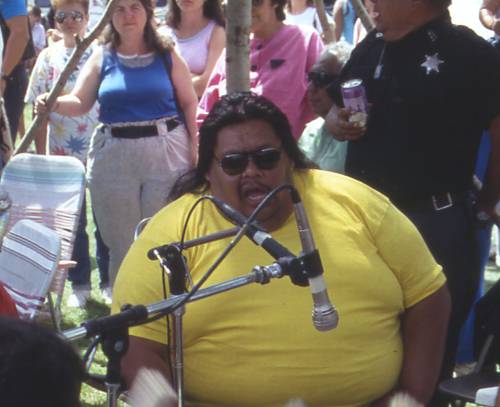 Obesity is a problem in all communities, but particularly among ethnic minorities
According to statistics from the American Center for Disease Control, at least a third of all Americans today (2008) can be considered obese — that is more than 25 pounds overweight for women, and 30 for men. Worse still, 21% of young people between the ages of 12 and 19, the age at which people should normally be most concerned about their looks, are obese, compared to only 6% in the 1970s.
Obesity has become a real national disease, which particularly afflicts the poorer part of the population and cost America over 147 billion dollars in 2008. 50% of black women and 48% of Hispanic women are obese. The problem also tends to be worse in small towns and rural areas than in the big cities; there are not a lot of obese people in New York, for instance, where traveling by car can take such a long time that it is often much faster to go on foot, and many people live in old apartment blocks with no elevator.
Obesity is definitely a disease of modern America, which began to develop in the 1960s following a fundamental change in lifestyles. Americans stopped walking and taking part in sport; nowadays, everything can be done by car, and even suburban and small town banks offer drive-thru tellers. Sport and physical education programs that used to be compulsory in high schools and universities have generally become optional, and instead of playing cowboys and Indians, kids now spend most of their time in front of the television or playing video games. When they go to the movies, they stuff themselves with pop-corn. Many women who stay home get bored, but when they go out for a break, they simply jump into their cars and drive round to a neighbor's for a cup of coffee and some cookies.
For millions of Americans, the longest walk they ever do is the walk round the shelves of their supermarket. Besides, it is not easy to go for a walk in suburban America, where little is provided for the benefit of pedestrians.
Eating habits have changed too. Not so long ago, Americans ate plenty of natural produce, fresh from the farm. Today, the fashion in supermarkets is for "enriched" foods. Vending machines offering candy and pop are omnipresent, and chocolate distributors and ice-cream sellers are all over the place; both young and old wash down their meals with pints of Coca Cola, Pepsi or something similarly sugary.
The "large" cups of cola sold in American restaurants contain almost a liter, and many places offer free refills!
Americans have gotten used to the new situation. In a Chicago department store recently, I was surprised to find that women's jackets started at the equivalent of European size 52! Wanting a smaller size for myself, I was sent down to the "Junior" department!

Yet while being fat is the new "being normal", being thin has now become a symbol of social status. In the affluent districts of big cities, young ladies pride themselves on being sleek, while their mothers often look emaciated, almost like skeletons! Jackie Kennedy's famous saying, "You can never be too thin or too rich", is taken as gospel in these parts of America. It has to be, since top fashion clothes are not designed to be worn by fat people.
Women and men spend fortunes on beauty products, extravagant health diets, and all kinds of cures and plastic surgery, to keep themselves thin. At the age of 70, Nancy Reagan was proud of the fact that she still took only size 6 (European size 36). But then, she was the President's wife — not an ordinary American

disease: illness, sickness - a pound : 454 grammes, 25 pounds : about 11 kg - overweight: too heavy - elevator: lift - teller: cash desk - to stuff: to fill - pedestrian: person on foot - pop: Coke, 7-Up, etc - department store : big shop - affluent: rich, prosperous - pride themselves on being : are proud to be - sleek: slender, elegantly thin - emaciated: unelegantly thin - gospel: the certain truth - plastic surgery: medical operations for esthetic reasons.
Printing: Optimized for the Firefox browser
Copyright © Linguapress.  Do not copy this document to any other website
Copying permitted for personal study, or by teachers for use with their students

Here are synonyms of some words used in the article: find the original words used:

Word endings : complete the endings of all the unfinished words in this extract, without consulting the original article. The carefully check your spelling.  Take care: in TWO cases, you do not need to add any ending at all !!


Obes is definit a disease of modern America, which beg to develop in the 1960s follow a fundamen  change in lifestyles. Americans stop walk and tak part in sport; nowadays, everything can be do by car, and even suburb and small town banks offer drive-thru tellers. Sport and physic educat programs that used to be compul in high schools and universities have genera become option,  and instead of play cowboys and Indians, kids now spend most of their time in front of the television or play video games. When they go to the movies, they stuff themsel with pop-corn. Many women who stay home get bor, but when they go out for a break, they simply jump into their cars and drive round to a neighbor for a cup of coffee and some cookies.

Adjective position. In the title, the adjectives fat and thin seem to be in the wrong place! Why do they not come in front of the noun Americans ? The answer is simple : "fat and thin" is an ellipsis (a short form) of the relative clause "who are fat and thin", though the "who are" has been omitted. This kind of expression, while not common and not to be imitated in most circumstances, is sometimes used for effect in titles or expressions that use opposite-meaning adjectives,  like creatures great and small.

Printing: Optimized for printing
Copyright © Linguapress.  Do not copy this document to any other website
Copying permitted for personal study, or by teachers for use with their students.

An original article for Linguapress.com, originally published in Spectrum magazine.
All articles published on this website remain the copyright © of Linguapress.com and/or their individual authors.
Reproduction is authorised exclusively for use by students for personal use, or for teachers for use in class