WITH AUDIO ►: Click to open/close audio player then hit the ► play button

Queen Elizabeth II died on September 8th 2022. "The Queen", as she was generally known, was born in 1926, and came to the throne in 1952 as a young mother in her mid-twenties. History sometimes takes an unexpected route, the future cannot be foreseen, and indeed if British history had gone according to plan in the 1930s, Elizabeth would never have become Queen at all.
Photo right: The Queen in 2021, still performing official business. 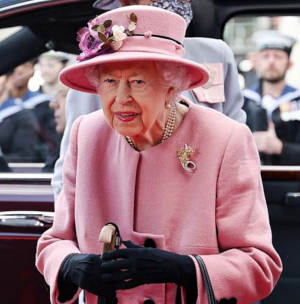 Queen Elizabeth II, who in 2015 became the longest-serving British monarch in history, was not born to be queen. In fact, as a child in pre-war Britain, she never expected to be queen. She – and everyone else – imagined that her uncle Edward, the King's eldest son, would follow normal tradition and become the next British monarch when his father, King George V, died; and that after him, the crown would pass to his son or daughter, assuming that he married and produced an heir.

1937 - Aged 11. Princess Elizabeth with her parents, already on official business. Her father has just become king George VI, and Elizabeth is now next in line to the throne.
Elizabeth was the daughter of King George V’s second son, Albert George. Albert, known in the family as Bertie, was a demure young man, much less popular and active than his older brother; he was shy and not very good at talking in public. Bertie’s shyness and his speech impediment were both magnificently portrayed in the 2010 movie The King’s Speech. Bertie, it was presumed, would remain the younger brother of the the next king, Edward VIII, and his two daughters, Elizabeth and Margaret, would spend their life as “minor royals”, neices of the king, or, when Edward VIII died, aunts of the next monarch, whether this was a king or a queen.
Yet as often happens, history did not go forward according to plan. In January 1936, King George V died at the age of 70, and the crown automatically passed to his elder son Edward, Prince of Wales, who immediately became King Edward VIII. The British government was alarmed; Edward was seen as a playboy, notorious for his affairs with married women. The government, of course, could not remove a king, but they made it plain to him that he had to change his ways. Edward did not change his ways; on the contrary, he announced on November 16th that he was going to marry his lover, Mrs. Wallace Simpson, a twice-divorced American. The British establishment was rocked to the core by this news: social traditions in those days were strict, and it was expected that the future King of England would marry a young lady from the British or European aristocracy, not a divorced commoner from the USA.

Aged 19, Princess Elizabeth signed up as an army driver during the final year of the Second World War.. She did not imagine that 7 years later, she would be Queen
Eventually Edward VIII realised that his plan to marry Wallace Simpson was going to cause a constitutional crisis and on 11th December, before he had even been crowned, he abdicated, chosing love over kingship. It is probably fair to say that abdicating the kingship and marrying Wallace was for him not a very difficult choice, as during his few short months of reign, he had amply shown that he was ill-suited to carry out the very heavy duties that fall to a head of state.
So it was that Edward's younger brother Bertie - Albert George - found himself thrust into the limelight  as he became the next king of England, a role which neither he nor his family had ever expected. He chose the regnal name George VI.
George VI had two daughters but no sons, so when he ascended to the throne as King of England on 12th May 1937, at the age of 41, it was his elder daughter, Elizabeth, aged 11, who suddenly found herself next in line to the British throne.
Though Britain was plunged into war between 1939 and 1945, Elizabeth and the British people in general assumed that King George VI would live to a reasonable age, remaining king through until at least the 1960s or 1970s. As a princess, and first in line to the throne, Elizabeth nonetheless began to take up some royal duties after the war ended, but with no sense of urgency. Her father George VI was very different from his elder brother Edward, and took the duties of kingship very seriously. In the post-war years, he was a very popular monarch, respected for his hard work and his attachment to his people.
So it came as a bombshell when, on 6th February 1952, George VI, who was a heavy smoker,  died of lung cancer at the age of just 56. While it was well-known that the King was not in good health, no-one was prepared for him to die so young,  least of all his daughter Princess Elizabeth, who got the news of her father’s death while on an official tour in Africa. She and her husband Prince Philip, the Duke of Edinburgh, immediately returned to Britain, where, at the age of just 26, she took up the heavy duties of Queen of England, the United Kingdom and other realms.

2014 - Aged 88, Queen Elizabeth II was still carrying out most of her official business as head of state – including official visits and speeches
As a young child, Elizabeth never expected to become Queen; but she did so, and has now achieved the distinction of being the longest-serving British monarch of all time, beating the record set by her great-great-grandmother Queen Victoria, who reigned for 64 years – most of the nineteenth century.
At the age of 94, Queen Elizabeth II still carries out many of the essential jobs of the Head of State, though age and the Covid epidemic have combined to significantly reduce her workload since 2020. She still has regular discussions with her Prime Minister, and signs the documents that require Royal Assent. While most people of her age have been retired for close on 30 years, Queen Elizabeth II often intimated that she would never retire, and would carry out her duties to the country and to her other dominions as long as she was able to.

(The end of this article has been updated, relative to the audio text, to take account of the death of queen Elizabeth II on September 8th 2022, at the age of 96.)
That is exactly what she did. On 8th September 2022, Queen Elizabeth II died peacefully at her summer residence, the castle of Balmoral in Scotland. She is succeed by her eldest son Charles, who has become King Charles III.

Printing: A printer-friendly document - better than PDF
Copyright © Linguapress.  Do not copy this document to any other website
Copying permitted for personal study, or by teachers for use with their students

Elizabeth: the Queen who almost wasn't

1. Picturesque phrases; choose the nearest equivalent of each of the following expressions: click down arrow and select the correct answer.

The text contains a number of nouns formed on the root of other words in the same family. As you listen to the text, pick out and write down the nouns derived from the following words:
shy   difficult   aristocrat   king  urgent   attach       monarch

3  Reading for information
Queen Elizabeth's grandfather was King   . (two words)
King Edward VIII was Elizabeth's . (one word)
Complete these sentences using information from the text, and providing the number of words indicated

Introduction:  This text is not a traditional schoolbook biography of Queen Elizabeth II. It does not tell her life story... her marriage to Prince Philip of Greece and Denmark when she was just 21, her four children, starting with the birth of Prince Charles when she was 22, her coronation in 1953, her role of head of state which started when Winston Churchill was Prime Minister, her position "above politics",  the highs and lows of her reign ... (the low points being 1992 when three of her children divorced or separated, a year she called her "annus horribilis", or 1997 after the death of Diana, when the Queen was accused of being cold while the whole nation mourned.)   Your students may be able to provide some of this information, or certainly to find it out if you ask them.
This text is more the story of how a young girl was propelled by circumstances into a position that she had not expected to be in, and how she has made - by general consensus - a great success of it.
Queen Elizabeth has been a point of reference in Britain and indeed in the world for almost seventy years. Most people in Britain have never known life without "the Queen". Some time, probably in less than ten years from now, Queen Elizabeth will no longer be there. This will be a moment of huge rupture in Britain and well beyond its shores. For many, Queen Elizabeth is not just the Queen, she is the monarchy. Will this British institution survive for long after she has gone? Probably? Maybe? Perhaps not for long?

Grammar: Conditionals. Though this text does not contain many examples of conditionals, the content almost encourages revision of the third conditional (unfulfilled hypothesis).  The young Princess Elizabeth was not destined to become Queen, but she did. Ask all students to look at the text and make up three unfulfilled hypothetical statements starting ....

There are lots of potential ways in which to complete each of these sentences.  Compare the unfulfilled huypothetical "if" structure with the open conditional structure which is used in the final sentence or the article.

For a clear explanation of the use of conditionals in English, see A Descriptive Grammar of English, § 1.5  pages 16 - 20

Reproduction is authorised exclusively for personal use by students, or for use by teachers with their classes.

Multi-copying of this resource is permitted for classroom use. In schools declaring the source of copied materials to a national copyright agency, Linguapress advanced level resources should be attributed to "Spectrum" as the source and "Linguapress" as the publisher.