► You are here : Robodog

RoboScience, a  UK company specialising in commercial robotic technology, recently launched its RS-01 RoboDog - the world's most powerful, most advanced and largest commercial legged robot. Compared to other robotic animals, such as those produced by Sony, this new invention is the "Formula 1" of robotic pets. 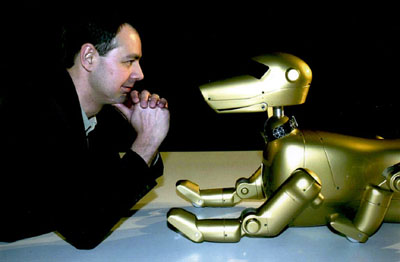 Technical and design breakthroughs made during the creation of this remarkable new robot will form the platform for next-generation lightweight robots that will automate many ordinary tasks and eliminate human involvement in high-risk commercial and military environments. Nick Wirth - formerly a designer of Formula One racing cars and co-founder and technical director of RoboScience - and a small team of highly-skilled specialists created the RoboDog in only seven months using a state-of-the-art computer-aided design tool provided by software house UGS.

Mark Oates, co-founder and marketing director of Northamptonshire based RoboScience, said, "All legged robots now for sale are nothing more than entertainment. This is an advanced computer in animal form - it's history in the making. We have done what was thought impossible - creating a robot that is light and strong, yet large enough to show the true potential of legged robotics that are genuinely useful to human life." The RoboDog will be sold as a hand-made limited edition product tailored to the customers' requirements. A maximum of 200 robots will be offered for sale worldwide over the course of this year at a price of £20,000.

The RoboDog is the size of an adult Labrador and is powerful enough to raise itself from the ground carrying a five-year old child. Its sophisticated motor capabilities and balancing software allow it to climb obstacles and perform handstands, and its motion and colour detection sensors enable it to find and kick a football. It connects to the Internet via a wireless network, and can be controlled from a PC. It can also recognise sixty oral commands.

Production versions of the RoboDog will allow owners to view locations remotely via an on-board camera or have the RoboDog access and read aloud e-mails. The RoboDog is 820mm long, 670mm tall and 370 mm wide and thanks to its advanced carbon-fibre and Kevlar construction, it weighs only 12kg (26 lbs) and can operate independently for 1.5 hours.

The manufacturers intend to licence elements of the RoboDog technology to companies in fields as diverse as industrial automation, special effects, security and military services. Mark Oates adds, "For companies struggling with the limitations of current robotics technology, this is - quite literally - tomorrow's world today! This RoboDog also proves that legged robots can now have the size and power to perform in high-risk environments, whether that is a power station or a mine-field. After all, the loss of a robot is an inconvenience; the death of a human being is a tragedy."

The Robodog has been designed and developed in a remarkably short space of time. Nick Wirth says "This is breakthrough technology created at breakneck speed."

Language: this document is in ordinary technical English. It is for very advanced learners only.
Pay attention to the typical features of technical language, notably the technical vocabulary, the compound and complex noun groups, and the use of passives or participles.

Explain the meaning of the following expressions:


1.Why is Robodog an important technological breakthrough?

2.What is perhaps its most significant feature?

3.How does one operate a Robodog?

4.Why is Robodog useful for military purposes?


Imagine that Robodog 2 is just going to be launched. This is a general public version of the original Robodog. Write a 150-200 word article about this new product, for a non-technical teenage or women's magazine.