Are you a "brand slave"?

Designer brands, such as Nike, Gap or even Virgin, are a major part of modern life. Often the brands are global names. But why do some people think that brands are important, while others could not care less about them?
Here a group of British teenagers talk about the importance - or unimportance - of wearing designer clothes.

MIKE: Yes, I think that brands are quite important. When I buy clothes, I tend to go for good brands, like Nike or Gap, 'cos you know they're good quality.
TESSA: Well I think that's stupid, I really do. The only time I ever buy Nike or things like that is in the sales, when they're  cheap. Otherwise, designer brands are a complete rip-off as far as I'm concerned. I can't afford to pay twice as much as I need to, just to have Nike or CK. It's a total waste of money!
MIKE: But it isn't, is it? I mean, you know you're getting good quality if you buy a well-known brand.
TESSA: Maybe, but that doesn't mean the opposite's true, does it?  I mean, when you buy a branded baseball cap or something, you're really paying about forty quid just to wear the logo! You can get perfectly good quality for half the price without wasting your money on designer stuff, can't you?
MIKE: Sometimes, yeah; but you can't be sure, can you? I mean, if you buy a pair of Nike trainers, you know you've got a good pair of shoes, and everyone else knows it too.
TESSA: Do they? I think that's just silly! Frankly, I don't go round looking to see what shoes people have got on; and I certainly wouldn't judge a person by their clothes.
SARAH: It's not a matter of judging people by their clothes. But I think, like, you feel better if you know you've got good clothes on. Not necessarily things like Gap, but anything with a reasonably good label.. I mean, lots of people wouldn't be seen dead wearing stuff from Littlewoods or Marks & Sparks — it's just so un-cool.
MIKE: Yeah, it's all about image, isn't it?
TESSA: Exactly, you've hit the nail on the head,haven't you? It's just image. I mean, you buy designer brands just because of the image. Not for any real reason at all. Just image, or imagination. You imagine people think more of you 'cos you're wearing Armani jeans or something like that.
MIKE: Well they do. That's why people wear them, isn't it? I mean, when you go anywhere, people judge you by what they can see, don't they? If you're wearing crap clothes, no one's going to think much of you at all!
TOM: I think you're missing the point there, Mike; after all it's not a question of choosing between designer clothes and crappy clothes, it's a matter of choosing between good expensive clothes with a posh label, and cheaper good clothes without one. You can perfectly well wear good clothes that don't have some fancy name. I mean, look at me!  Are you going to look down on me, 'cos there aren't any trendy labels on any of my gear?
SARAH: No, not really, but if you had on a Calvin Klein sweatshirt or something, I might think you were cooler.
TOM: Oh that's really gross!
TESSA: I call it juvenile.
SARAH: But it isn't! Like Tom said, people do judge you by what they see, and if they see you're wearing good clothes, they'll be more likely to get a good impression of you.
TOM: But the things I'm wearing are perfectly good, aren't they?
SARAH: They're O.K?..
TOM: They're perfectly good, and good quality too. I can't see what makes Mike's sweatshirt any better than mine, just 'cos it's got GAP written on it. Besides, half of  designer branded stuff is made using sweatshop labour in Asia. You know there's kids of ten years old working in factories in places like Cambodia, making cheap designer stuff for famous brands. There was a documentary on TV the other day.
TESSA: Yes, like, you buy a pair of super trainers for £100 here, and the people who actually made them were being paid 50p an hour or something. Your posh expensive trainers really cost about £5 to make. It's no wonder that big fashion companies can afford all their expensive advertising, no wonder their bosses are millionaires.
SARAH: Yeah, maybe, but it's the same for everything, isn't it? It isn't just the big names that are exploiting people in poor countries,is it? They're all doing it. I mean look at your shoes, Tom. Where were they made?
TOM: I haven't a clue.
SARAH: No, so how do you know they weren't made using child labour too? You don't, do you?
TOM: No: but even so, two wrongs don't make a right. And it doesn't make any difference to the fact that lots of designer brands use sweatshop labour in Asia, does it?
MIKE: Frankly, I don't see what I can do about it, since you can't go round asking where everything you buy was made . It's just not practical. And wherever they're made, I still like wearing good clothes. I don't feel good in crap outfits.
SARAH: Nor me neither.


Brand: designer name - can't afford to: don't have enough money for -'cos: because -  could not care less: are not at all interested -crap, crappy: poor quality - factory: industrial building - fancy: posh, compicated - gear: clothes, equipment - go for: prefer - go round looking: spend time looking - gross: bad, awful - it's not a matter of: it's not a question of - Littlewoods & Marks & Sparks: Littlewoods and Marks & Spencer, two famous British clothes shops - look down on: have a poor opionon of - no wonder that: not surprising that - posh: high class - quid: pounds - rip-off: extorsion (French: arnaque) - sales: when shops sell articles cheaper than usual - slave: prisoner, captive - - stuff: things - sweatshop labour: people working in very bad intensive conditions - they'll be more likely to: they will more probably - think more of: have a better impression of - trendy: fashionable, popular.
Note: pay particular attention to the phrases and expressions highlighted in blue.

Return to Linguapress site index
Copyright © Linguapress.  Do not copy this document to any other website

Slaves to fashion : Are you a brand slave ?

Note the use of tag questions in this dialogue. Tag questions are a very common feature of conversational English. Now add the appropriate tags that might have followed the following sentences used in the dialogue.
► To learn all about using tags, see Linguapress English grammar: Tag questions

4.  You can perfectly well wear good clothes that don't have some fancy name.

5.  People do judge you by what they see,

6.  There was a documentary on TV the other day

You've hit the nail on the head.

You're missing the point there....


This teaching resource is © copyright Linguapress renewed 2022.
Revised 2020 . Originally published in Freeway, the Intermediate level English newsmagazine.
Republication on other websites or in print is not authorised


Free to view, free to use in class, free to print, but not free to copy to other websites.

Boden- Fashion for everyone 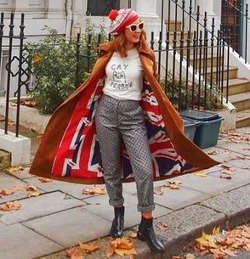 Uk & international - Prices in £ ►Select your country at checkout