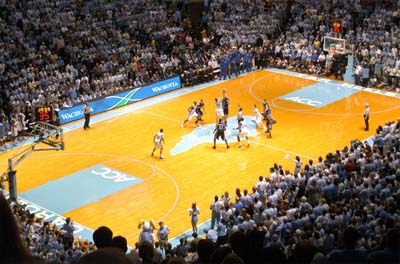 If American athletes so often take the greatest number of medals, if American scientists and thinkers win so many Nobel prizes and other awards, and American businesses dominate the world, it is largely down to one word: competition.

Since the days of the pioneers, competition has been at the heart of the American way of life; and in today's USA, there are probably few areas where the competitive spirit is stronger than in the world of colleges and universities.

Rivalry between institutions is intense, and nowhere is this more true than on the sports field. Successful sports teams can be enormous assets to a college's reputation and public image, which explains why many go to incredible lengths to attract and recruit top high-school athletes.

There is a growing feeling, however, that in many cases they go too far. Recent media reports have focused on the extremely high drop-out rate among college sports scholars. While some abandon their education to take up lucrative professional contracts, most leave college with no degree, and no hope of entering the elite world of professional sport either. Pressured to achieve results in their sport, many have had no option but to put academic study on the back burner.

Their situation was recently highlighted by Rep. Ron Wilson, a Texas Democrat, who claims that colleges and universities are cheating many student athletes of a proper education.

"They entice them in with all kinds of promises of fame and fortune, they get them at university, and then only one out of ten of them graduates," he said. "The system doesn't really care about them."

One thing the system does care about, on the other hand, is money. College sport is big money in the USA, and the prestige attached to high performance athletes, and the colleges they represent, is enormous. NCAA (National College Athletic Association) rules state clearly that all college athletes must be amateurs, yet college sport is a multi-billion dollar business. Though it is registered as a tax-exempt charity, the NCAA itself had a budget of 18.9 billion dollars in 2019.

One major source of income for the NCAA is a $6 billion college basketball contract with CBS television, an 11-year deal signed in 1999 and renewed for a further $8.8 billion in 2014.

This and other expensive contracts have drawn a lot of criticism. Faculty members in many colleges have complained of the enormous sums of money spent on extensive high-quality sports facilities; and many students are increasingly bitter about the favors bestowed upon college sports champions.

Though it concerned a high school, not a university, the notorious 1999 massacre at Columbine High School was all about sport. One of the reasons that led Eric Harris and Dylan Klebold to go on their killing spree was their resentment at the privileges and status enjoyed by the "jocks", the heroes of the school's sports teams. Had they waited a year or two, Harris and Klebold might have emptied their guns on a university campus, not in a high school.

The arguments about the role and status of college athletes is one that preoccupies many students, athletes or not. It only takes a few minutes' searching on the Internet to turn up sites and discussion groups on the subject. The biggest issue right now seems to be the question of whether college athletes should be paid, like professionals.

NCAA rules are quite clear on this point. Apart from their sports scholarships, college athletes are not allowed to "receive any salary, incentive payment, award, gratuity, educational expenses or expense allowances" nor "use athletics skills for pay in any form". In reality, the situation is often very different, with many high-performance college athletes receiving undeclared benefits including free prestige cars (such as a BMW) and free housing.

Judging by comments on Internet forums, most college athletes think they deserve to be paid. Robert Krot, a basketball scholar, wrote: "I play college basketball, and I barely have time to do anything. There is no way I could hold a job. I don't come from a wealthy background, so I have to make do with what I have. College athletes should be paid."

But another writer, called Joss, disagrees; "The value of money is far greater than you think, it can mess up your mind. I know, because I play basketball; but you know, what I am also trying to become is a microbiologist, because I know I am not guaranteed to be drafted into the NBA."

Interactive.   Replace the words exercise:
Twenty-six words, essentially nouns and adjectives, have been omitted from the extract form the article copied in box B. Slide or copy words out of box A to box B to complete the original text.


Since the days of the ,   has been at the heart of the American   of life; and in today's USA, there are probably few   where the competitive   is stronger than in the world of colleges and universities.
between institutions is intense, and  is this more true than on the   . Successful sports teams can be enormous to a college's   and public image, which explains why many go to incredible   to attract and recruit top high-school
There is a growing  , however, that in many cases they go too far. Recent   reports have focused on the extremely high drop-out among college sports  . While some abandon their   to take up professional contracts, most leave college with no  , and no hope of entering the elite world of   sport either.
Pressured to achieve   in their sport, many have had no option but to put academic   on the back  .
Their situation was recently highlighted by Rep. Ron Wilson, a Texas Democrat, who claims that colleges and universities are cheating many student  of a  education.  "They entice them in with all kinds of promises of   and fortune, they get them at university, and then only one out of ten of them graduates," he said. "The system doesn't really care about them."

Interactive: Rephrase the following sentence, using the framework suggested:  boxes will expand automatically to take as much text as you type.
Original: Thanks to a well developed system of scholarships, grants and bank loans, the large majority of young Americans who have the wish and the ability to go on to higher education can do so.

Rephrased version:  As the system  , most young Americans  , as long as they   and are able to do so.

In class, or for homework: have students contract this article to about half the original length.
Descriptive writing:
In class, or for homework:  Students should imagine that they have just gone to study for a year at the University of Michigan. They have been there for two weeks now, have had time to get settled and start going to courses (in the subject of their choice). They should write a long letter (250 - 400 words) in English, to a friend at home. The letter should contain at least six  of the following words.
campus , sport, drop-out, athlete,  team,  stadium,  money,  scholarship,

Free to view, free to share,  free to use in class, free to print, but not free to copy..
In schools declaring the source of copied materials to a national copyright agency, Linguapress advanced level resources should be attributed to "Spectrum" as the source and "Linguapresss France" as the publisher.


Linguapress respects your privacy and does not collect personal data. We use cookies to gather anonymous visitor statistics and to enable essential page functions. To remove this message click   to remove this message, otherwise click for more details