There are still people in positions of power who do not believe that everyone has to work to protect our natural environment .

In 2015 most of the nations of the world signed the historic Paris Environmental protocol.  Two years later, President Trump took USA out of this vital international accord. And in countries all over the world, there are still people who think that "protecting the environment" is a pointless waste of money 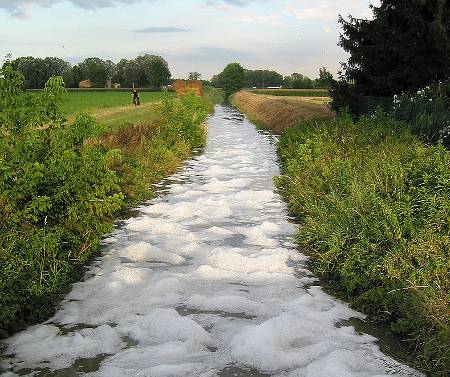 There is a small factory somewhere in the middle of somewhere, called Blackwater,  Deadfish & Co. Every day, a thousand gallons of polluted water go from the factory into the small river beside it. The water has been pouring into the river for years and years. A few weeks ago, the company took on a new employee, Gordon Green. A couple of days after starting work as a junior manager, Green confronted the boss, Mr. Desmond Deadfish, with a few proposals.

GREEN: Mr. Deadfish, sir. I have a few ideas for improving things around here. Could I have a word with you.

DEADFISH: Of course, Gordon, let's hear what you have to say.

GREEN: Well sir, I think everybody would be better off if we installed a Clean-it-up Water Treatment Plant between us and the river.

DEADFISH: What on earth for?

GREEN: Well we seem to be putting an awful lot of waste into the river.

DEADFISH: Oh I don't think so, not compared with some other companies — but go on Gordon. I'm listening. How much do these things cost?

DEADFISH:: Mmmm. That's a lot of money. It would take a part of our profits. So tell me, what advantage would we get out of it?

DEADFISH: And what else ?

DEADFISH: And no direct benefit for us?

GREEN: But of course; a cleaner river and a better environment are good for the company, aren't they?

DEADFISH: Listen young man! There's no way anyone here is going to start investing fifty thousand pounds in a luxury like a water-treatment plant! If there's no direct benefit for this company, it's just a waste of money! If we start worrying about the environment too much, we'II just have to put up our prices, and then we'll lose our customers. So until the day the government forces us to treat our waste water, we won't go wasting our money on things we don't need. Anyway, there are hundreds of small factories like ours putting waste into the river between here and the sea! What difference will one less make?


Mr. Deadfish's attitude is one which can be heard in every country of the world. It is always easy to say that problems of the environment are someone else's problems; or even (like some people) that they do not exist.  It is simple to say that someone else should take action first. Companies do it, governments do it too.
In most developed countries, the situation has improved in the last 40 years.  Factories cannot now put polluted water directly into rivers. There are environmental laws. But there are still companies that break the law; and there are still countries in many parts of the world, where there are no laws.
The cost of a polluted river does not appear in the annual accounts of a company. It is a cost to society, not to the firm; and too often, society just says: "This river is polluted, it always has been, and there is nothing we can do to save it." And so the problem is just carried away to somewhere else, and someone else.  Someone else's problem.

WORDS:
gallons: a US gallon = 3.78 litres, a British  gallon = 4.54 litres - pour : flow, go - better off: in a better situation - to treat: to clean, to find a solution - plant: a machine - What on earth for? : why ? - have a word with :  speak with -  an awful lot: a lot - waste: effluent, things that we throw away - benefit: advantage (not profit) - worry: be anxious - customer : client - attitude : point of view, opinion  improve: get better -- annual accounts: the annual financial figures for a company - society : people in general (not a company) - factory: an industrial building, where things are made

Copyright © Linguapress.  Do not copy this document to any other website . Copying permitted for personal study, or by teachers for use with their students.


GREEN:  Well sir, I think everybody would be off better if we installed a Clean-up-it  Treatment Water Plant between us and the river.


DEADFISH: What for on earth ?

GREEN: Well we seem to be waste an awful lot of putting into the river.

DEADFISH: Oh I don't so think, compared not with other some companies — but go Gordon on . I'm listening. How much do cost these things ?

DEADFISH:: Mmmm. That's a lot of money. It would a part of our profits take . So tell me, what advantage would we get it out of ?

DEADFISH: And else what ?

DEADFISH: And no benefit direct for us?

GREEN: But of course; a good river and a better environment are cleaner for the company, aren't they?

This teaching resource is © copyright Linguapress 1998 - 2020.
Revised 2020. Originally published in Freeway, the Intermediate level English newsmagazine.
Republication on other websites or in print is not authorised

Now available in paperback from Amazon UK, USA and Europe, and as a Kindle e-book from Amazon stores worldwide

Multi-copying of this resource is permitted for classroom use. In schools declaring the source of copied materials to a national copyright agency, Linguapress intermediate level resources should be attributed to "Horizon" as the source and "Linguapresss" as the publisher.
Multicopiage en France: en cas de déclaration CFEDC par l'établissement, document à attribuer à "Horizon", éditeur "Linguapress"