► You are here:   English reading resources  ›
Intermediate English  › London in the sea

London in the Sea?

Planet Earth is getting hotter, and the level of the sea is rising. This is going to cause massive problems for many seaside cities; and London is one of them.

Many parts of London will be under water by 2060, if nothing is done to protect them.

The Thames Barrier...Will this still be enough to protect London in 2050?
London on the Thames, yes; but London in the Sea? No thank you!  Yet this could  happen before 2060, unless steps are taken quite quickly, to prevent it.
As a result of global warming, the sea level around the south east corner of England is expected to rise by 54 cms in just half a century! And scientists now say that many parts of London will be at serious risk from flooding by the sea within 50 years.
It's not all of London that is in danger; just some parts to the east of the city. And they won't be under water all the time; just when there are very high tides.
The low-lying suburbs beside the Thames in the East End of London are already protected from high tides by a massive barrier that stretches right across the river; but more defences will be needed along the banks of the Thames to protect a larger area to the north of the river, and further east.  And no-one really knows if the existing Thames Barrier will still be enough to protect London, even in 2050.
The Thames barrier was opened in 1982. During the first ten years of its life, it was closed, on average, just once a year. Some years it was never closed at all. Between 2000 and 2013, it was closed an average of almost six times a year; and in the year 2013-2014, it was closed 50 times.... in twelve months. The level of the sea is getting steadily higher, that is certain.
Other towns and low lying areas in the east of England are facing similar problems; and it will take a lot of time, and cost a lot of money, to protect them. 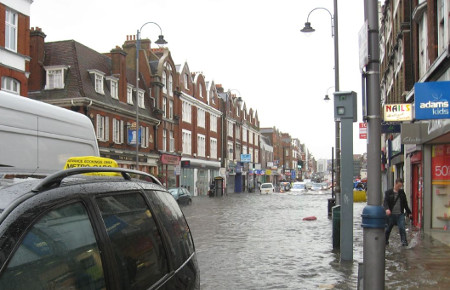 London floods in 2007
Of course, there have always been occasional very high tides. A thousand years ago, there were big floods around London; and in 1953, before the Thames Barrier was built, over 300 people lost their lives in "the big flood";  but today the dangers are bigger. There are more people, more roads, more infrastructure. In the past, people did not build in places where there was a risk of flooding. Today, in southeast England, land is so expensive, that people build everywhere – even in places that are liable to be flooded.
Scientists also say that global warming will  lead to warmer and drier summers in the south east of England. This will cause major changes in vegetation, and several species of native wildlife will not be able to survive. Wet in winter, hot in summer: will that be London in fifty years' time ?
London faces big problems in the next fifty years; but London is a rich city, which can pay to build the protections that will be needed. London's difficulties will be very small, compared to the problems that will be faced in some of the world's poorer counties, like Bangla Desh.

The new grammar for schools, students and teachers

WORD GUIDE
steps : measures, actions - prevent : stop - half a century : 50 years - to flood: to cover the land with water - tides: the rise and fall of the ocean -  suburb: exterior part of a city - bank of a river: the side of a river - average : medium - steady : regular, constant -  infrastructure : buildings, roads, services -  are liable to be : will perhaps be - species: variety, sort

Printing: Optimized for A4 printing
Copyright © Linguapress.  Do not copy this document to any other website
Copying permitted for personal study, or by teachers for use with their students

London in the Sea


London  the Thames, yes; but London  the Sea? No thank you!  But this could  happen   2060, unless steps are taken quite quickly, to prevent it.
a result  global warming, the sea level  the south east corner of England is expected to rise  54 cms  just half a century! And scientists now say that many parts of London will be  serious risk  flooding  the sea  50 years.
It's not all of London that is in danger; just some parts  the east  the city. And they won't be  water all the time; just when there are very high tides.
The low-lying suburbs  the Thames in the East End of London are already protected  high tides  a massive barrier that stretches right  the river; but more defences will be needed  the banks of the Thames to protect a larger area to the north of the river, and further east.


Pair work: sketches. It is 2050, and large parts of eastern London are undefr water. Have pupils, working in pairs, imagine an interview between a  journalist and Mayor of London.

This teaching resource is © copyright Linguapress
Revised 2016 from a shorter item originally published in Freeway, the Intermediate level English newsmagazine.
Republication on other websites or in print is not authorised

Originally published in Freeway magazine. Updated 2020.
Multi-copying of this resource is permitted for classroom use. In schools declaring the source of copied materials to a national copyright agency, Linguapress intermediate level resources should be attributed to "Freeway" as the source and "Linguapresss" as the publisher.
Multicopiage en France: en cas de déclaration CFEDC par l'établissement, document à attribuer à "Freeway", éditeur "Linguapress"..