The story of London

This is not an article about visiting London. It's background information for anyone who wants to know a bit about the city, its history and what it's like today.
For tourist information on London, visit London on our partner About-Britain.com .

When the French poet and traveller Théophile Gautier first went to London in 1843, by ship, he was quite astonished. He wrote that London was the "capital of enormities and of proud rebellion". 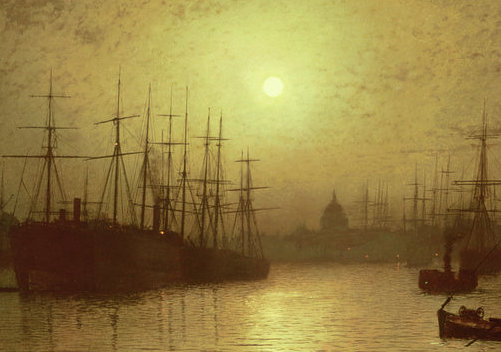 London's docks, as Théophile Gautier or Charles Dickens would have seen them. Painting by Atkinson Grimshaw, 1880
"On this gigantic scale," he continued, "industry almost becomes poetry, a poetry in which nature plays no part, but which is a result of the immense development of human will."
In 1843, London really was very different from any other city. It was much bigger than any other city, and it was the capital of the most industrialised nation in the world.

It was already a city with a long history, of course. London had become the British capital in Roman times, but since then, it had been built and destroyed and rebuilt so many times that there were few traces left of the capital city of Roman Britain, except deep below the ground.
Today, the oldest buildings in London include the Tower of London and Westminster Abbey, which are almost a thousand years old. 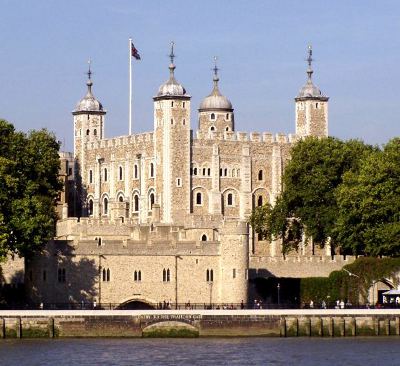 The Tower of London, built in the 11th century
Though the Tower was always a part of London, Westminster Abbey was once over a mile from the capital city. For centuries, "London" just covered the area corresponding more or less to the Roman city. Today, this part of London is still called the City of London, and is the heart of the bigger "London".
Until recently, "the City" was home to hundreds of thousands of people; but today its population is actually well less than ten thousand! Today the City is the heart of London's financial district, full of bankers and businessmen by day, almost deserted by night.
Back in the Middle Ages, the City was already becoming too small. In the 11th century, monks built a big new abbey at Westminster, and King Cnut began to build a palace beside it. King Ethelred, his successor, then decided to move his court from the city of Winchester, to the palace of Westminster. Westminster has been the seat of the English, then British, parliament since 1265, and London has been the capital city for even longer.
While the parliament was established in Westminster, the City's growing population kept spreading to other villages all round. Villages like Chelsea and Hackney eventually became swallowed up by the metropolis which kept growing and growing.
Today, Westminster, which contains Buckingham Palace, Parliament, Big Ben, Piccadilly Circus, Trafalgar Square, and London's most famous shopping district, is part of the "West End' of Central London. Nearby, Chelsea is an expensive residential area, and Hackney is a working-class district: they are all parts of London. 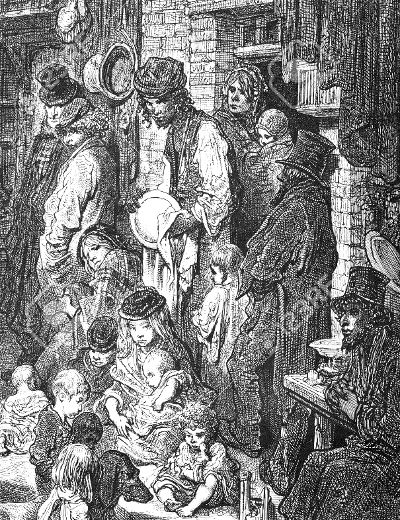 Poverty in London around 1870, seen by the artist Gustave Doré

In spite of its age, Central London does not have many very old buildings. The City itself was burnt to the ground in the terrible fire of 1666, and was almost totally rebuilt after it. Large parts of London were also rebuilt in the nineteenth century and have been rebuilt again since then, for different reasons.
Charles Dickens, the author of Oliver Twist and other famous novels, lived in the London that Théophile Gautier visited, and has left us with terrible descriptions of the conditions in which the poor of London lived and worked in those days. Millions of people worked in the great city, with its docks, its offices and shops, and its services. In those days most people who lived in cities were poor, and lived in squalid conditions. But a new "middle class" was growing, specially in London, where there were lots of jobs. In this way, London, the biggest city in the world, was also the first "modern" city.
It remained the world's biggest city until after the second world war.
Since then it has continued to change, but got smaller; but with over seven million inhabitants , today's "Greater London" is, with Paris, one of the two biggest cities in Europe; and also one of the most fascinating. 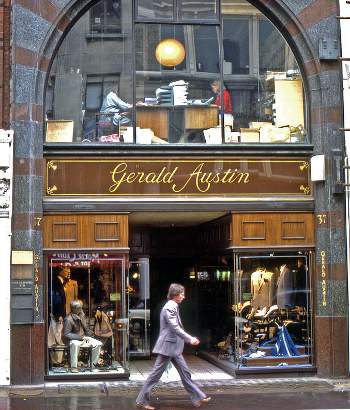 New Bond Street
London is one of the richest cities in Europe, and lots of people in London have plenty of money to spend. But like almost every big city, London has its prosperity but also its poverty.
Most tourists visit the "West End", with its shops, cinemas, theatres and monuments. This is London's front window, where the streets are clean and most people, including the tourists, have jobs, and money to spend.
Harrod's store, in Knightsbridge, claims it is the most famous shop in the world; in theory you can buy anything there, from an elephant to a pencil (though naturally, they would have to order the elephant specially for you, there are none on the shelves!)
In the small streets behind Regent Street, there are all sorts of specialist shops, selling high-quality products to people who can afford them. "Gentlemen's tailor since 1788," says the sign outside a tiny shop with beautiful suits in its window. Expensive suits. Most of this shop's customers are businessmen, celebrities and diplomats; here at least, the foreign customer, after his first English lesson, can say "my tailor is rich".

Two miles to the north east of Regent Street, the scene is very different. Here you are in the "inner city" district of London, where many of the streets are dirty, the shops look cheap, and the people do not look rich.
Few tourists visit Islington, Bethnal Green, Brixton and London's other depressed areas. A lot of the inhabitants here are from  minorities — mostly West Indian or Asian — and many of them do not have any work. Those who do have work are often in unskilled jobs which do not pay well; cleaners, dustmen, shop assistants.
Nevertheless, though these areas of London are poor, they cannot be described as ghettoes, and while levels of crime are above average in many parts of the inner city, these are not dangerous areas. Twenty years ago, there was rioting and violence in the streets in Brixton, but since then things have been generally calm.

Printing: Optimized for  printing
Copyright © Linguapress.  Do not copy this document to any other website
Copying permitted for personal study, or by teachers for use with their students

Interactive MCQ exercise. Twenty words. Choose the correct word from among the options listed. Most of the words that you will have to find are common and useful function words, particularly adverbs and prepositions


In 1843, London really was very different  any other city. It was  bigger  any other city, and it was the capital of the  industrialised nation in the world.

It was  a city with a long history, of course. London become the British capital in Roman times, but then, it had been built and destroyed and rebuilt so times that there were traces of the capital city of Roman Britain, deep below the ground.
Today, the  buildings in London include the Tower of London and Westminster Abbey, which are  a thousand years old.
the Tower was  a part of London, Westminster Abbey was  over a mile  the capital city. For centuries, "London" just covered the area corresponding more or to the Roman city. Today, this part of London is called the City of London, and is the heart of the  "London".

True or false. Say whether these statements are true or false, according to the article.

Interactive comprehension exercise :Read the article above, then answer these questions.
Write your answers in the boxes, which will expand to take the text that you write.
When you have finished, you can select and copy the questions and your answers, or take a screenshot, and paste them into any other support (document, text file, email, pdf) for saving or printing.

1.    Why was Gautier so surprised when he first saw London?
2.    How old is London?
3.    Why did Westminster become an important part of London?
4.    Why are there not many people in the City of London at night?
5.    Explain why London does not have a lot of very old buildings.
6.    Why was London the first "modern" city?
7.    Why are there more tourists in Knightsbridge than in Brixton?
8.    Why was Brixton in the news twenty years ago?

Introduction:
a) Brainstorm with your pupils, to see how much they know, collectively, about London. Some pupils who have visited London may try to dominate the debate; but try to let as many pupils as possible have their say.
To help the less vociferous pupils express themselves, allow everyone five or ten minutes, in groups of two or three, to prepare statements about London.
b) If you have a map of London, put it on the wall, and situate all the places referred to in this document.
The City, the Millennium Bridge, Buckingham Palace, London Bridge, Parliament, the West End, Waterloo station, the South Bank, Bethnal Green, Trafalgar Square, Chelsea, Carnaby St., Camden.


This teaching resource is © copyright Linguapress renewed 2022.
Revised 2022 . Originally published in Freeway, the intermediate level English newsmagazine.
Republication on other websites or in print is not authorised


Copyright notice.
This resource is © copyright Linguapress 2001-2020
Updated from an article originally published as a Freeway Focus in Freeway magazine.