Among the most famous and visited national parks in America, the spectacular Florida "Everglades" are dying. To save their rich natural ecosystems, with their birds, reptiles and many other species, the US Congress has set up the biggest environmental program in American history. But the costs are enormous, and things are not advancing very fast. 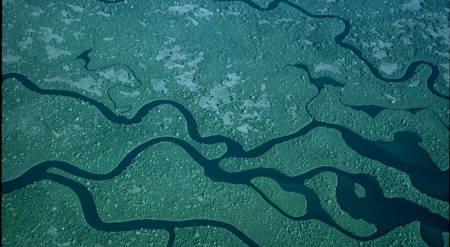 The Everglades, seen from the air.
Florida's "Everglades", the largest national park in the eastern USA, are in serious danger. One of the most significant areas of "wetland" in the world, and classified by UNESCO as a "World Heritage Site", the park has suffered dramatically over the last sixty years on account of encroaching agriculture and the vast expansion
of Florida's population. If the decline is not stopped, the entire ecosystem of southern Florida could be irreparably damaged - and the sunshine state, one of the fastest growing states in the USA, could become an inhospitable wasteland.
Back in the year 2000, in order to prevent just such a catastrophe, and ensure the survival of America's most distinctive National Park,  Congress approved a 30-year 8.2 billion dollar Everglades rescue plan, the largest concerted environmental project the world had ever known. 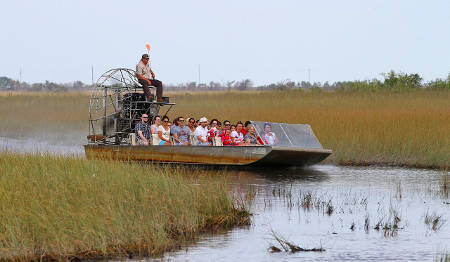 The Everglades are popular with tourists.
Estimated at 10,700 square miles (27,700 km2), the original Everglades area was home to a fantastically rich and diverse range of wildlife; but in recent decades, this wildlife has already been decimated. It is estimated that the water-bird population of the Everglades has fallen by 93% in the last forty years.
As a "wetland" region, the whole environment of the Everglades depends on the flows of water into and out of its vast area of natural swampland. Before modern agriculture and drainage schemes began to change the hydrology of the whole of southern Florida, water that fell on the central part of the Florida Peninsula  used to flow regularly and naturally into the great Lake Okeechobee, the large lake at the northern end of the Everglades region. From there, it would flow out slowly and regularly in a southerly direction, through the Everglades, and into the Gulf of Mexico.
Since the 1940's, this natural system has been radically modified. Over 1,700 miles of canals have been built, in order to control the risk of flooding, to provide water for Florida's growing population, and drain land for agriculture and house-building. Today a large amount of the water that flows into Lake Okeechobee is rapidly evacuated through man-made canals, out into the Atlantic Ocean.
The quality of the water entering the Everglades has also suffered, as a result of increasing use of phosphate fertilizers in the agricultural region to the north of Lake Okeechobee.

The Everglades restoration program is attempting to reverse the recent course of events, and undo some of the damage. It calls for the removal of some 240 miles of canals and levees, and the creation of six enormous reservoirs to supply water for Southern Florida's growing cities. In south west Florida, more than 20 miles of Highway 41 will need to be rebuilt. At present, this road cuts right across the southern Everglades west of Miami, on a raised levee, effectively cutting the area in half. The plan calls for twenty miles of this levee to be replaced by bridges, allowing free flow of water from one side to the other.

The Everglades rescue program was prompted by the publication in 1998 of a 4000 page report, produced by the U.S. Army Corps of Engineers. According to the report, the Central and Southern Florida (C&SF) water supply system was designed to serve 2 million people, but more than 6 million people now live in the area, and the population is expected to reach 12 to 15 million by 2050. This explosive growth has strained the system's ability to perform its intended functions, and the Everglades are seriously threatened.

In a review published ion 2012,  the US national Research Council found that work to protect the Everglades was moving at a very slow pace.  Unless more progress was made, the outlook for the future would not be good, and large parts of the Everglades' vital and remarkable ecosystems might be damaged beyond repair.


Copyright notice.
This resource is © copyright Linguapress
This text may not be reproduced on other websites nor in printed form without written permission from the publishers. Reproduction is authorised exclusively for personal use by students, or for use by teachers with their classes.

Interactive worksheet
Save the Everglades

Replace the missing prepositions in this extract from the article

As a "wetland" region, the whole environmentthe Everglades depends the flows water and its vast area natural swampland. Before modern agriculture and drainage schemes began to change the hydrology the whole southern Florida, water that fell the central part the Florida Peninsula  used to flow regularly and naturally the great Lake Okeechobee, the large lake the northern end the Everglades region. there, it would flow slowly and regularly a southerly direction, the Everglades, and the Gulf Mexico.
Since the 1940's, this natural system has been radically modified. Some 1,700 miles canals have been built, order to control the risk flooding, to provide water Florida's growing population, and drain land agriculture and house-building. Today a large amount the water that flows Lake Okeechobee is rapidly evacuated man-made canals,   the Atlantic Ocean.

1) The Everglades is.... or The Everglades are..... Both are acceptable; "the Everglades" is a unitary entity, therefore a singular is justified; however the name has a plural form, so a plural can be admitted too.

2) Tenses. This text is a good illustration of usage of the present perfect tense. As you go through the text in class, have students note how tense choice is often clearly determined by the adverb or adverb phrase of time that is used.
When past time is determined with reference to the present, then the present perfect is required: words/phrases which do this include:
Already / since / in the last... / over the last ....
In some cases these phrases are in the text (explicit), in other cases they are often implied (implicit):
Over 1,700 miles of canals have been built (implied: since the 1940's).
Generally speaking, note the different forms of past tense used in this article, including used to and would - both of which are forms that imply habitual or repeated action.  See grammar: past tenses

3) Verbal nouns: Verbal nouns are a common feature of technical or formal English; we tend to use them a lot less in spoken language.

Imagine a forum organized by the Greater Miami Chamber of Commerce and the National Parks Service.
Distribute these roles to your students:
Representatives of :
Subject of the meeting: Congress is asking Florida to finance half the project. The Florida Taxpayers Association are 100% opposed to this, as is the Chamber of Agriculture. Other groups want to modify the plan, while Greenpeace, the Tourist Board and the NPS are determined that it should go ahead, whatever the cost. Distribute roles to students, and have each one prepare his role and his arguments for homework. A lively - if not vigorous - argument can be expected in class!

Students should write a letter to the President, supporting or criticizing the Everglades revival program.

The role play can be used as a pair work exercise, either involving two students or one student and the teacher.

Other ideas?
EFL teachers: Help develop this resource by contributing extra teaching materials or exercises.
Click here for further details
This teaching resource is © copyright Linguapress
Republication on other websites or in print is not authorised

This resource -  © copyright Linguapress  renewed 2021.
Top photo from US national Parks Service, photo below by JJRon - Creative commons licence.
.
Reproduction is authorised exclusively for personal use by students, or for use by teachers with their classes.